Reinforcing the Parliamentary Dimension of the EU/ASEAN Partnership: A Strategic and Timely Move - Foundation Office Thailand

Reinforcing the Parliamentary Dimension of the EU/ASEAN Partnership: A Strategic and Timely Move

On May 21st, 2021 the offices of the Konrad-Adenauer-Stiftung (KAS) in Southeast Asia hosted Mr. Klaus Welle, Secretary-General of the European Parliament, for an online roundtable discussion on the parliamentary dimension of the EU/ASEAN partnership. The event was held after the EU and ASEAN decided to become “Strategic Partners” in December 2020. Selected participants from eight ASEAN member states and the EU discussed six practical ideas to improve the cooperation between parliaments in the EU and ASEAN and to elevate their relationship to a new level of cooperation.
June 14, 2021 Ordering Information 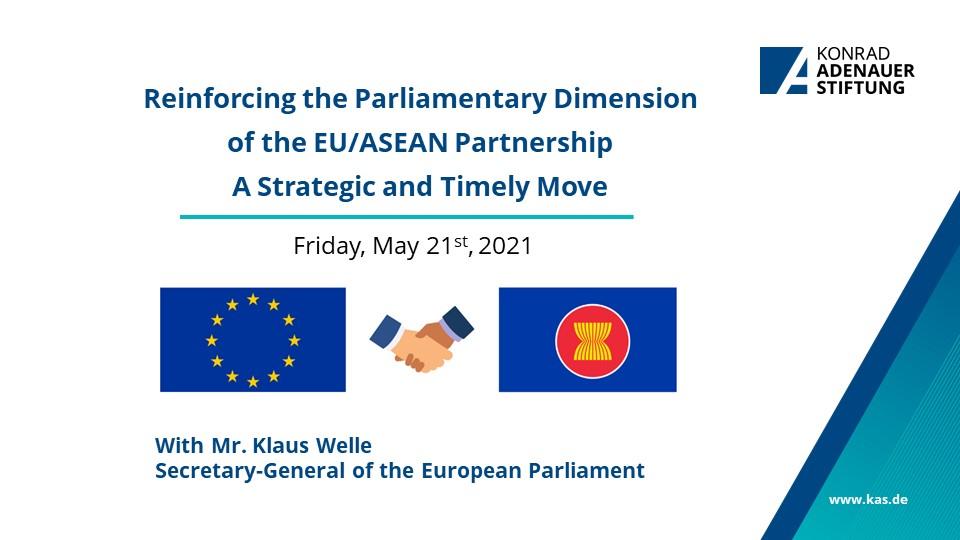 Reinforcing the Parliamentary Dimension of the EU/ASEAN Partnership: A Strategic and Timely Move

The EU Parliament and ASEAN could establish common parliamentary assemblies to organize regular dialogues and improve the quality of the strategic partnership. The participants suggested that the EU Parliament be aware of differences in regimes and situations between ASEAN states. Hence, the EU could take two approaches towards ASEAN, dealing with ASEAN as a group and each ASEAN member state separately. ASEAN could also develop its capacity and be more integrated through the existing body called ASEAN Inter-Parliamentary Assembly, or AIPA, and also enhance the EU-ASEAN partnership through AIPA mechanisms.

Idea 2: A representative of the EU Parliament in ASEAN

The second idea is to establish an office of the EU Parliament in ASEAN. The EU Parliament representative would support the bilateral cooperation as well as the development of parliamentary committee–committee relationship. The participants encouraged the EU to be more visible for the ASEAN’s public since the presence of the EU is relatively discrete in the region, while the U.S. and China play an important influential role in Southeast Asia. Due to a weak connection between parliaments and the public in some ASEAN countries, the EU might also consider educating the public about the role and importance of parliaments when engaging with ASEAN.

The pandemic replaced EU-ASEAN physical visits with online meetings. Even though physical cooperation is expected to resume, online platforms are still very useful, not only at the governmental level but also for medium and smaller-sized cooperation such as at the academic level. Online-platforms can complement and enlarge the cooperation between the EU Parliament and its partners to be more regular, permanent, and intensive.

The EU Parliament has several research cooperation agreements in Europe and close relationships with universities. It has also been developing technologies, best practices, tools, and methodologies on various sustainability and socio-economic topics. The participants agreed that it would be a good idea to expand the cooperation to Southeast Asian countries by establishing new cooperation networks between research services in national parliaments, universities, or think tanks. They suggested forming an ASEAN-EU expert group that could work with parliaments as well as experts and representatives of the civil society.

The session also discussed ASEAN working with a European collaboration network called ESPAS – European Strategy and Policy Analysis System. The purpose of this network is to engage researchers, think tanks, universities, and experts around the world to provide strategic foresight on global trends. EU’s decision-makers and EU institutions then use this prospective analysis for policy and legislative planning of European initiatives.

At the academic level, participants suggested that the EU strengthen its educational exchange programs, such as Erasmus+, and work on narrowing down the gap in terms of educational level between developed and developing countries. Besides, the ASEAN University Network could be deepened and widened, in terms of academic collaboration across all ASEAN member-states, and reach out to the civil society too.

Finally, some participants underlined that parliaments in the EU and ASEAN could connect more with the public and support more actively civic engagement, especially among young people, as well as gender equality, and inclusiveness. 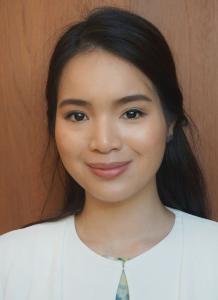