The EU between internal tensions, COVID-crisis and external challenges - Polish and German perspectices

The European Union (EU) has been struggling for years with multiple crises such as the eurozone crisis, the migration crisis, Brexit and economic stagnation. The COVID-19 pandemic has become an additional challenge that not only requires considerable efforts from the member countries of the EU in economic, political and social terms, but also makes existing acute deficits and structural problems unsparingly apparent. In addition, the EU is exposed to various external and global challenges, such as ever-increasing political tensions with China and Russia. How does the EU and its member states respond to these various challenges and how does this affect the nature and further functioning of the European integration project? These were the leading questions of a research project titled “Quo vadis European Union of 27? The EU between internal tensions, COVID-crisis and external challenges – Polish and German perspectives” which was conducted in 2021 at the Chair of German Economics at SGH Warsaw School of Economics together with partner institutions from Poland and Germany and with the support of the Konrad Adenauer Foundation in Warsaw. Its results were discussed at a German-Polish conference held at SGH Warsaw School of Economics on October 13 and 14, 2021. A total of 15 authors developed their ideas on the topic of the conference into 11 articles for this edited volume.

The first part of the book deals with challenges for European policy as whole and in relation to its member states stemming from structural inconsistencies of European institutions as well as with the functioning and future nature of the European Union. Thomas Apolte discusses if, and to what extend the agreement of the July 2020 EU summit has brought about a Hamiltonian moment, as it has been dubbed by the Germany’s new chancellor Olaf Scholz, at that time still finance minister. On this summit the EU’s 27 heads of state had decided on a huge rescue package to counteract the coronavirus-induced economic crisis which for the first time in EU’s history shall be financed by the issue of common debt by the European Commission. Some politicians and commentators view this noteworthy change in analogy to U. S. Treasury Secretary Alexander Hamilton, who in 1790 engineered a political agreement on public borrowing that helped transform the loosely confederated 13 former colonies into a more tightly bound federal union. Jürgen Wandel analyzes in more depth the EU’s policy response to the economic fallout in the context of the coronavirus pandemic as manifested in particular in the Next Generation EU recovery plan and in the expansion of the European Central Bank’s ultra-loose monetary policy. Drawing on a robust political economy framework he focuses on informational problems and political economy consequences with specific reference to Germany and Poland. A manifestation of internal tensions in the EU is the ongoing dispute between EU institutions and member states about tying EU funds to certain basic standards around the rule of law and democracy at home and over the primacy of EU law over national law. Affected by this conflict are in particular Poland and Hungary, but also Germany. It is known from bureaucracy theory that self-interested civil servants are interested in increasing competences for their organizations that furthers their power and prestige (Downs, 1994; Niskanen, 1994). This also holds for the Court of Justice of the European Union, that plays an important, but often overlooked role in European politics through its attempts to further develop EU law (Vaubel, 2018). Against this background Bernard Łukańko and Grażyna Zboralska reflect on the boundaries of the primacy of European over national law, its potential impact for the economy and possible solutions referring to currently ongoing cases. Magdalena Bainczyk analyses the consequences of the German Federal Constitutional Court ruling on the European Central Bank (ECB) ’s Public Sector Asset Purchase Program (PSAPP) in the context of the EU Recovery and Resilience Facility which it viewed an abuse of ECB’s mandate and brought the country in conflict with EU institutions.

The second part of the edited volume focuses on monetary and banking policy issues in the European Union. In view of the threat of rising inflation David Burden, Maurice Daub and Lilli Zimmermann explore the accuracy of GDP and inflation forecasts in the Euro area. Johannes Alban and Andreas Igl analyze the effects of newly introduced securitisation repositories and disclosure requirements onthe transparency of structured products and assess the side effects on the further development of the EU capital market (union) after Brexit and COVID-19. Waldemar
Milewicz examines ownership structures in the German banking sector and the resulting lessons and consequences for the Polish banking sector.
The third and final part of the monograph discusses various aspect of issues of the digital transformation of the European society and economy. Digitalization processes challenge existing policies focusing on tangible products and assets, fixed geographic boundaries, limiting transaction costs and supply and demand scarcities (OECD, 2019, p. 3). Digital technologies, platforms and infrastructures transform with immense speed innovation processes and entrepreneurship in our economies with broad implications for value creation and capture (Nambisan, Wright, Feldman,
2019, p. 1). This provides many opportunities for new products and business models (Teece, 2018) but also threats for established firms and market players (Domini et al., 2021). Olga Domakur and Bakhtiyor Mamurov refer to basic processes of digitalization with respect to economic effects and policy implications. Agnieszka Wójcik-Czerniawska discusses scenarios of a post-COVID digitalized world. Finally, Christian Rusche presents monitoring results of the status quo Artificial Intelligence in German economy, policy and society.

As a whole, this edited volume provides a multi-faceted look on economic developments and challenges in the post-Brexit EU in a crisis-ridden environment. We hope this inspires further research and discussion on the future development of tthe EU and its member countries. 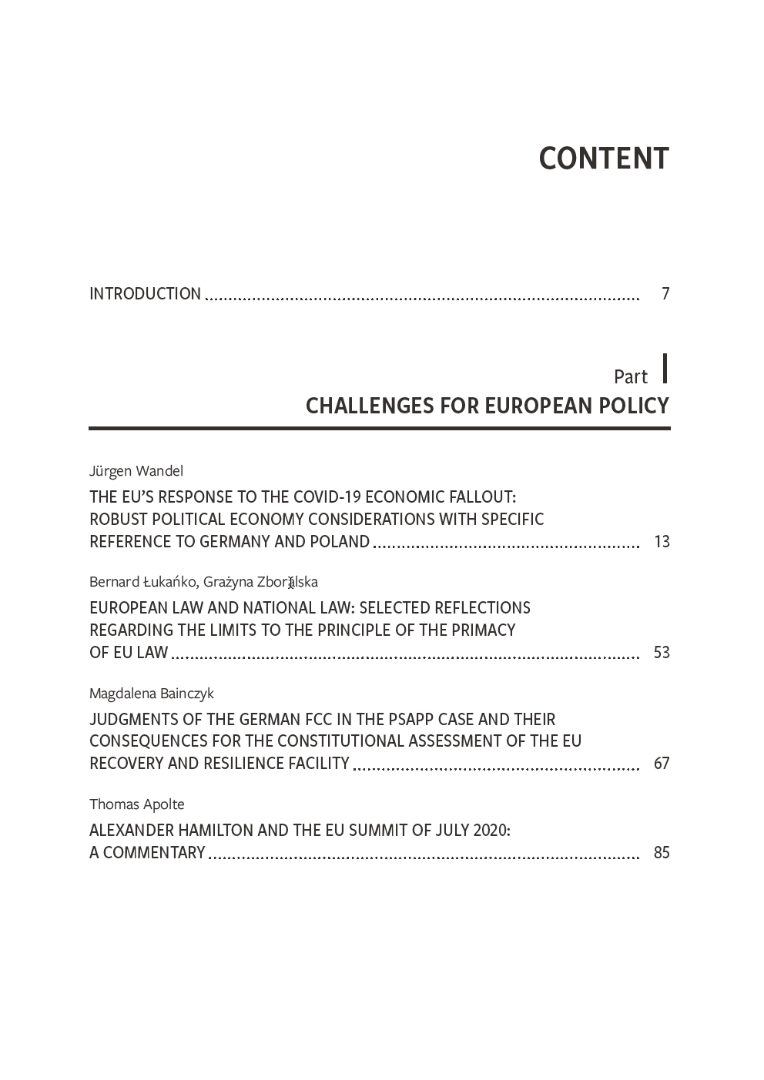 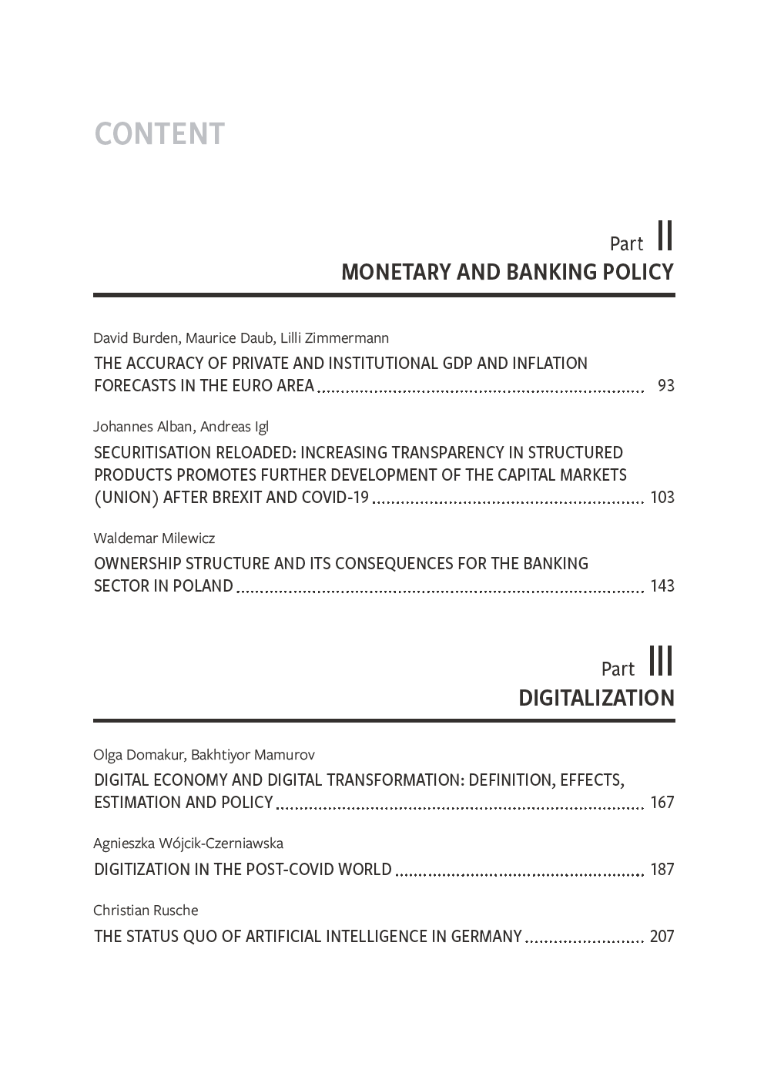 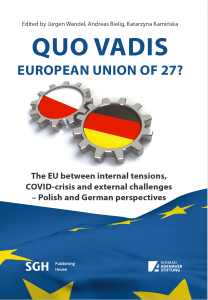