As a cooperation initiative between the Konrad-Adenauer-Stiftung’s regional Rule of Law program for the Middle East andNorth Africa and the KAS Ramallah office, a conference was organized to bring together experts from the MiddleEast and Europe to discuss the state of Rule of Law in the Middle East and how it has been affected by the emergence and recentgrowth of radical militant groups in the region.
11 мая 2015 г. Информация для заказа 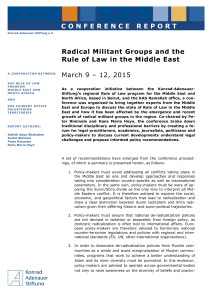