European Union and Georgia in a New Reality: Views of the Leading Political Parties of Georgia

After the Russian-Georgian War in August, 2008, the European Union has become a chief mediator in conflict. The European Union’s role in the Caucasus region has significantly increased after elaboration of a peace plan by President Sarkozy and some other moves. EU monitors are already observing the implementation of Sarkozy’s plan. Besides, the European Union has pledged € 500 million aid for the reconstruction of Georgia.

A roundtable discussion with participation of Georgia’s leading political parties and representatives of the EU member states was organized on October 10, to address the aforesaid issues.

In general, the leading Georgian political parties are unanimous in the opinion that (1) there is no other alternative to Georgia’s European choice and (2) the European Union is a natural partner to Georgia.

The point of view of the Labor Party is, that:

According to the United National Movement:In terms of integration into the European Union, the Georgian Parliament has been working on the issues as follows: (1) accedence to the international documents on genetically modified products; (2)United Nations Convention against Corruption, which will serve as a basis for trade facilitation; (3) development of preferential trade system.- Expansion of the EU peacekeeping format;

- Financial assistance (ratification of € 500 million package for the Republic of Georgia regardless the global financial crisis), which is of particular importance to Georgia, especially amidst a decrease in investments in the aftermath of war;

The point of view of the Conservative Party is, that:

The point of view of the Republican Party is, that:According to the Christian-Democratic Movement:

Views of the EU Member-States

On the Georgian-Russian conflict:

On the integration and democratization process:Summary

The roundtable discussion has demon¬started that there is consensus among the parties on the necessity of (1) rapprochment with the European Union, (2) Georgia’s further democratization and, for that purpose, carrying on internal political dialogue. At the same time, the oppositional parties and the ruling party have different opinions about the present situation and future prospects. While the ruling party is pinning hopes on its own new wave of democratization, the opposition parties talk about an Imitation of democracy by the government party and consider the August developments as a state catastrophe.

With regard to the European Union it becomes clear, that beyond the declared agreement on values there are still no clearcut strategic visions or specific political themes. Issues prevailing in political discourse (visa regime, free commerce, sup-port for democracy etc.) are given in the formal documents on EU-Georgia relations or are introduced in discourse mainly by Europe. Consequently, no substantial difference in parties’ positions with regard to the aforesaid issues can be observed.

To a certain extent, this issue can be related to the lack of conditionality and ab-sence of the so-called “endpoint” in the EU-Georgia relations. Georgia’s political elite will not have any differentiated visions, until the EU-Georgia relations itself become differentiated. Though, the European Union’s role and importance to Georgia have signifi-cantly increased after the August events, they are still not of such an importance as to consider the European Union a determin-ing factor of Georgia’s domestic political processes. 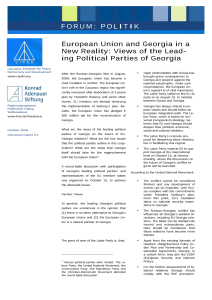