From June 17th through 23rd, 2016 25 high-ranking officials and experts from the European Union and the United States convened at the KAS Academy in Cadenabbia, Italy for the 4th annual KAS Transatlantic Conference: “Global Crisis and Opportunity - Transatlantic Responses to Innovation and Transformation”. This conference was jointly organized by the Konrad-Adenauer-Stiftung offices in Brussels and Washington, D.C.
22. Juli 2016 Bestellinformationen 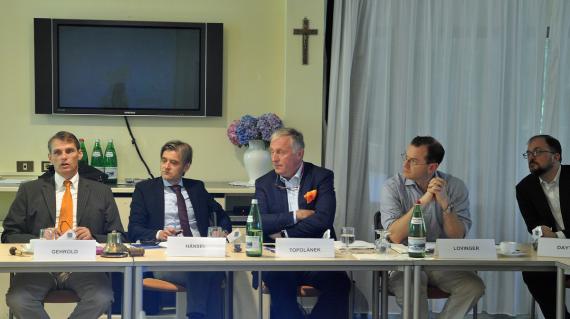 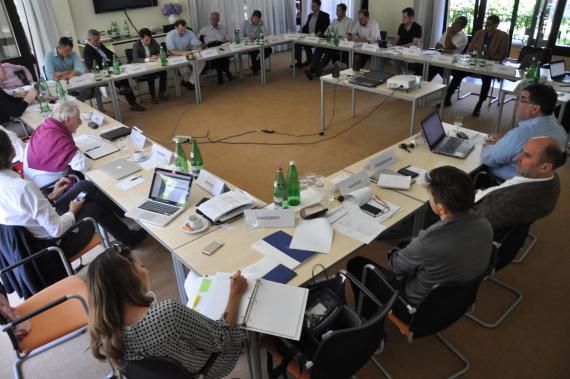 Crisis can obscure perception, but as we remind ourselves of the rich and longstanding traditions of transatlantic cooperation, approaches for the mitigation of crisis through common value based strategies become evident. Understanding challenges as opportunities to strengthen transatlantic cooperation in order to positively shape the future, is fundamental to addressing maligned forces present in the world today. It is with this basic premise that 25 leaders of the transatlantic community from the U.S., Europe and Israel assembled in Cadenabbia to openly discuss major crises we face present day as well as the ones we will need to anticipate in future. Also guiding the discussion was an admission that clear and honest reflection is required of all parties if real solutions are to be attainable. With this candor focused on the discourse of causes instead of merely effects the discussion was structured into three overarching themes and in turn laid out the lines for common courses of action: the future of the transatlantic relationship, by what means it will be impacted, and opportunities for meaningful future cooperation.

Implications of a Strong EU-U.S. Relationship

Among participants there was a consensus that the transatlantic alliance is strained due to a more inward looking U.S. administration coupled with a complacent Europe which has not fully accepted a more engaged role in international security cooperation.

There is a clear dissonance between expectations and reality amongst both parties, yet the foundation of a functioning transatlantic alliance must be based on shared responsibility and commitment. In order to establish such a foundation, each party must first assess and define their individual values and strategy before jointly recommitting and cultivating their relationship. The difficult nature of the many crises facing the U.S. and Europe, both current and future, require a strong understanding of ones values before pragmatic policies should be pursued. The U.S. and the European Union have been natural partners because of a shared belief in democratic, liberal governance and therefore a reinvigorated alliance is well within reach. It is with this stronger alliance that we will be better able to mitigate threats and negotiate with those who are hostile to communal ideals.

One area of direct concern is the response to the crisis in the Middle East, specifically in Syria, which has directly impacted demographics and security in Europe and the United States respectively. Participants agreed that a broader, more forward thinking strategy requires looking at causes instead of effects which has currently occupied the focus of policy makers. Causes beyond the marker of autocratic governance identified were failed international interventions and non-interventions in recent history: unsustainable population growth paired with high unemployment, the failed Arab Spring and radicalization fueled by political disenfranchisement and a power vacuum.

The complex nature of these causes highlights a need for a unified strategy to move forward and help prevent future failures. This includes the containment of armed conflict by means of military intervention, as well as the establishment of save zones and red lines, infrastructure build-up in former conflict zones, democratization vis-à-vis values of good governance and the protection of universal human rights without the inducement of cultural determinism.

The discussion on the election focused on two main aspects: the environment which produced two of the most negatively viewed U.S. presidential candidates in history, and the presumptive foreign policy the new president will pursue.

Faced with domestic disparities such as wage stagnation and a widening economic gap, support for an anti-establishment candidate allowed Donald Trump to ride a populist message to the nomination of the Republican Party and turned Hillary Clinton’s all but certain coronation into a protracted primary fight with an unlikely anti-establishment candidate. Protectionism, isolationism and nativism are a thread throughout the major themes of the campaign. While this has been vocalized more on the Republican side, Hillary was forced to reconcile increased support for protectionist views with establishment foreign policy. Despite Donald Trump’s threats to disengage from Europe without a significant increase in their contribution towards global security, U.S. foreign policy under Clinton is expected to be more assertive than the Obama administration’s, in particular by bolstering the transatlantic alliance whilst seeking strategic partnerships in Asia and South America. Europe can no longer comfortably assume that the existing transatlantic relation takes precedence over other relationships the U.S. is seeking out. This undeniably is daunting, yet at the same time provides opportunity for Europe to redefine its interests and diversify the nature of its portfolio of engagement to its transatlantic and transpacific partners.

Arriving at the third major theme of the conference, participants turned their attention towards the effect innovation, technology and competitiveness had within our respective societies and cultures.

As 50 to 80 percent of economic growth stems from technological innovation, our societies heavily depend on our ability to foster long-term growth and development; crucial to our societies’ security and sustainability. However, how can we balance innovation with the social disruptions that they cause? And who is responsible for addressing the effects of these changes? It was expressed that the United States is more willing to accept failure and disruption to drive innovation, whereas Europe, despite having the expertise and research, is more cautious. This leads to fewer innovative technologies being brought to market in Europe than in the U.S. In light of this discrepancy, there was a consensus that innovation in the fields such as micro- and nanotechnology, biotech, artificial intelligence, autonomous vehicles, virtual reality, transhumanism will also play a role in finding solutions to challenges, but will simultaneously change our societies. Therefore government needs to play a more active role in guiding innovation by investing in research and development and promoting policies that establish a fertile environment for innovation, while simultaneously responding to disruption in a more efficient manner.

Innovation is crucial for the transatlantic alliance and will increasingly take on a greater role. It is important that we do not let disruptions associated with innovation blind us to the mutual enrichment to our societies. We must learn to adapt and cope with these disruptions together, by profiting from our respective strengths and addressing our weaknesses.

Both within and beyond the scope of the three major themes of the conference, participants expanded the discourse on the assessment of current crises such as the recent situation in Syria which has mainly contributed to the refugee crisis in Europe and the role Russia and China play in current crisis hotbeds. Likewise, participants pondered on Brexit and its impending underpinnings of rupturing Europe and transatlantic relations. The nature of future threats and catastrophes stemming from natural disasters, resource scarcity, systemic malfeasance and instability as well as the lack of economic development moreover provided fertile grounds for discussion. In light of this, all participants were in accord that crises will arise. Our governments cannot afford to withdraw and sequester them, but instead must develop a strategy to mitigate these crises. Once more, burden sharing and actively seeking opportunities in crisis will be key.

The transatlantic alliance is not an abstract notion, but something that we engage in every day through trade, travel and communication. However, a new strategy that addresses changing realities and future threats which affect the partnership is needed. This will with no doubt only be achieved with a new and redirected focus on shared values, but these values will not be the same ones which have shaped partnerships over the Atlantic in the past. They will be driven by new common interests, reflecting the changes and disruptions in our societies such as demographic shifts, innovative technologies and the challenges to the well-being of our societies and governments will be facing jointly. Knowing we will face crises in future and knowing we are stronger and better equipped to manage them if work together is our core value; the foundation of our alliance that will bind us together and ensure the future freedom and prosperity in our countries. We must continue to remind ourselves that the efforts for this union are worthwhile. The conference participants were in unison in pledging their continued commitment by applying their expertise, resources and networks towards a new Transatlanticism. 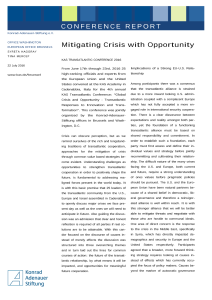