von Lam Peng Er, Narayanan Ganesan, Colin Dürkop
The rise of China is an intriguing question for both scholars of international relations and practioners of statecraft. The book analyses China and East Asia's mutual accomodation and looks at China's accomodative diplomacy towards East Asia.
10. Mai 2010 Bestellinformationen

It also examines the current status of the relationships between China and North and South Korea as well as with Japan, Indonesia, Malaysia, Singapore, Thailand, Vietnam, Myanmar and the Philippines. The book tries go provide answers to quite a number of questions: what are the implications of China's rise for the global political economy and the regional pecking order in East Asia? Will China`s rise underpin a more prosperous and stable East Asia and nascent regionalism, or usher in greater uncertainty, contentious territorial disputes with its neighbours, and big power competition and conflict with the US and its ally Japan? Or will Beijing become a contented, responsible, cooperative and amicable power which has successfully harenessed international norms and institutions of the contemporary world to its own advantage? Or will it seek to unilaterally remake the "rudes of the game" and forge a Sino-centric order in East Asia? Is Beijing's professions of a "peaceful rise" believable to its neighbours? 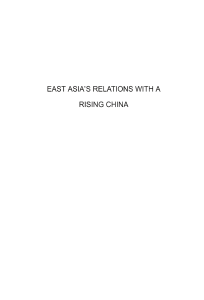