The end of the Cold War brought about a gradual change in the way in which countries viewed politics. Where politics and diplomatic relations were traditionally means for the state to safeguard its sovereignty at any cost, politics in the post-Cold War world was no longer so much about forcefully promoting one state’s national interests. Rather, politics in the post Cold War world increasingly came to be about “soft power”. This shift away from traditional perceptions of the role of politics has necessitated a rethinking of diplomacy. This publication compiles the insights and analyses of diplomacy past, present and future of scholars from Japan, China, Korea and Europe. 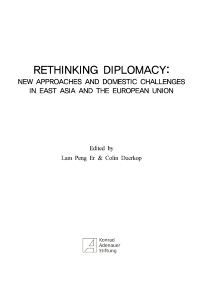