by Dr. Gerhard Wahlers
“It is very important to us that together we find a strong response to the coronavirus. It knows no borders, it knows no nationalities.” These are the words of Ursula von der Leyen, President of the European Commission, with regard to the coronavirus crisis. The outbreak of COVID-19 and the subsequent sustained pandemic have created a new level of global emergency in early 2020. This includes the closure of borders and introduction of border controls within the European Union.
July 6, 2020 2 Ordering Information

Narratives of threat and crisis can play into the hands of populists, as has been the case during the coronavirus pandemic. Political actors﻿, who assert that belonging to a nation or state is based on descent, seek to exploit such situations to rationalise their policies of exclusion and isolationism. Of course, nationalism can also come in other guises. The idea of national unity within a society can, in principle, serve as a cohesive element that creates identity in a positive sense.

However, particularly for democracies, nationalists and populists who exaggerate the idea of national unity pose a real challenge. They follow a familiar pattern by looking for scapegoats and spouting supposedly simple solutions. Over recent years, many parts of Europe have also seen the rise of right-wing, populist, and Eurosceptic parties. These parties have their differences, particularly as regards their stance towards the EU, but they have been gradually gaining seats in national parliaments and the European Parliament. The reasons for this are complex and cannot be solely attributed to the wave of migration to Europe in 2015. It is important to look at the specific situation in each country. The popularity of these parties in Europe threatens the democratic progress of many EU countries, writes Wilhelm Hofmeister.

Policies of exclusion and isolationism are expressed in different ways around the world, but they often involve neglecting the rights of minorities. In democratic and undemocratic countries alike, indigenous peoples tend to have inadequate political representation and lack protection from the state. This is particularly true in Latin America, where indigenous peoples often suffer from a weak rule of law and inadequate infrastructure. In this issue, Georg Dufner examines the obstacles to rectifying the problems of representation and autonomy that beset the indigenous populations of this region.

Different national narratives can also play a role within a country. As a result of its geographical position and history, Belarus is home to both pro-Russian and pro-European sentiments. Jakob Wöllenstein highlights how uniting these currents will be a challenge for a country divided along identity lines. Ethnic and religious affiliations can create a sense of community within societies, but they also harbour the potential to create tensions ﻿– particularly in countries with heterogeneous populations. La Toya Waha describes this phenomenon using the example of South Asia.

A shift towards nationalistic concepts is also becoming increasingly evident in places where they have previously only played a subordinate role in identity formation. This can be observed in the Arab Gulf states. As Fabian Blumberg writes, religion and tribal affiliation are no longer the only factors that create meaning and community in the region.

Nationalism is and remains a global phenomenon ﻿– in democratic and non-democratic countries alike. When faced with challenges that transcend borders, such as the coronavirus pandemic, some countries seem to believe going it alone is an option. Multilateral institutions such as the WHO are under fire and perceived as too inflexible to deal with the problems successfully. The European Union has also taken its time to come up with a joint response to the crisis, but now it is making greater efforts to demonstrate “European solidarity in action”. Ultimately, the current crisis highlights the fact that success depends on a joint international approach. Actions based on solidarity, such as the provision of medical supplies, the treatment of COVID-19 patients from neighbouring countries, and collaborating on research into potential treatments, all highlight the power of joint action at this time. In future, we can only hope that the lessons learnt from the current crisis will result in even closer multilateral coordination and global exchange. 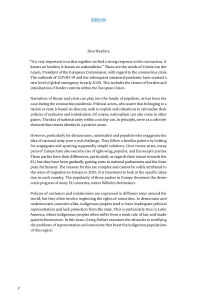