by Dr. Gerhard Wahlers
Rapid technological developments witnessed over recent decades offer many opportunities, but also present us with new challenges – political, social, and sometimes private. Strategic questions regarding the political design of our digital future need to be considered at the international level in particular. This is because strict technological separation of a wide variety of state and non-state actors is now virtually impossible. Globalised goods, services, communications, and data streams are shaping the world.
March 27, 2020 1 Ordering Information

How do we deal with states that are integrated into global economic cycles and exhibit remarkable innovative potential, but at the same time have restrictive societies and political systems? Countries like China demonstrate how technological development can take place even in an environment characterised by political oppression. There does not appear to be a contradiction between “authoritarian” and “innovative”. In such an environment, how can we take advantage of the opportunities of the digital age to create a sustainable digital future that enhances global democracy and equality of opportunity? In order to answer this question, the United Nations is working towards transnational and trans-institutional cooperation. Technological progress can only become a foundation for growth that includes everyone if there is cross-border collaboration, emphasises Fabrizio Hochschild, ﻿Under-Secretary-General﻿ at the United Nations.

The opportunities and risks of the digital age are clearly demonstrated in ﻿﻿Sub-Saharan Africa. The internet, and particularly social media, offers a continent with great democratic deficits new opportunities for civic involvement, transparency, and free access to information. However, the initial euphoria with respect to the emancipatory potential of social media is increasingly tempered with scepticism, as Mathias Kamp writes. The dark sides, such as the spread of hate and fake news, are all too obvious. Autocratic governments in Africa are becoming increasingly adept at instrumentalising social media for their ends.

In democratic countries, on the other hand, the digital transformation can be used to eliminate obsolete bureaucratic apparatuses, simplify work processes, and increase overall economic attractiveness. The new Greek government is striving for such a network of citizens, business, and state, as Henri Giscard Bohnet and Martha Kontodaimon describe. The country, which is scarred by the financial crisis, aspires to catch up in the digital sector.

China shows how technological innovation in the digital area can be used at least as effectively in autocratic systems. Sebastian Weise uses the example of China, a high-tech autocracy, to show how ﻿liberal democracies can face the challenge of innovation in an illiberal context.

The development of cryptocurrencies forms part of the digital transformation. State actors are involved, as are, increasingly, non-state actors. Jason Chumtong analyses the various causes and possible effects of introducing digital currencies such as Libra, e-krona, and the digital yuan. Only time will tell how successful these initiatives will be, and whether they will become true alternatives to established currency systems.

Cutting-edge technologies constitute a threat when they are used for political manipulation. This is clear from the example of deepfakes, as Hans-Jakob Schindler explains in an interview with Nauel Semaan. The spread of fake news as a political instrument has long been a topic in political discourse. It is important to react to technological innovations that continuously expand the potential of disinformation campaigns, threatening our domestic security in the process.

Digitalisation presents an ambivalent picture across the globe. Technological innovation does not necessarily solidify liberal values. Instead, digitalisation is an instrument that can be used in the service of any political or regulatory idea. Actively designing and refining the digital age, but also regulating it in the spirit of liberal values is absolutely essential for opposing high-tech autocracies. Germany must actively participate and fund the digital innovations necessary to avoid being crushed by the digital wave. Because, ultimately, the relationship between technology and ideology will increasingly occupy us in the years to come.

Dr. Gerhard Wahlers is Editor of International Reports, Deputy Secretary General and Head of the Department European and International Cooperation of the Konrad-Adenauer-Stiftung (gerhard.wahlers@kas.de). Choose PDF format for the full version of this article including references. 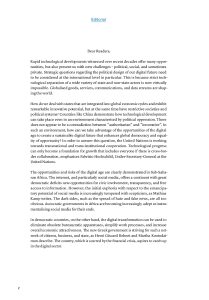