by Dr. Gerhard Wahlers
Power shifts are a fundamental phenomenon underpinning global politics. In 1990, as the bipolar world order finally unravelled, US political scientist Joseph S. Nye wrote: “Just as farmers and meteorologists try to forecast storms, so do leaders and analysts try to understand the dynamics of major changes in the distribution of power among nations.”
April 14, 2021 1 Ordering Information

Today, the world finds itself in a phase of major upheaval once again. The COVID-19 pandemic has accentuated and expedited certain geopolitical developments that have been brewing for some time and are associated with a fundamental shift in the international order. The rise of the People’s Republic of China to become a great power is not the only expression of this change, but it is perhaps the most obvious. These changes have not blown in like a sudden storm, instead﻿, they reflect the slow tectonic shifts of the ﻿earth’s crust – and these shifts create tensions.

But what does this mean for Germany? And what course should the European Union set for its foreign policy to ensure it is not at the mercy of these changes﻿ but rather to actively shape them? It is clear that Europe must assume greater responsibility in the international arena – and it is high time for Germany to play a stronger role. However, increased commitment and independence do not mean that relations with the US would decline in importance. Germany and Europe need to maintain a close alliance with the United States if they are to successfully defend their interests. Therefore, it is important to seize the opportunities arising from Joe Biden’s election as US president, says Peter Beyer, Member of the Bundestag and Transatlantic Coordinator of the Federal German Government.

The EU’s vision of itself as a global actor is currently the subject of much debate. These discussions are important, because having a voice in a changing world order requires a clear set of goals and ambitions. Hardy Ostry and Ludger Bruckwilder believe the EU must seek to be a major player in shaping the international order. In an interview in this issue of International Reports, Christoph Heusgen, Germany’s Permanent Representative to the United Nations, also stresses the importance of building an international system based on multilateral cooperation and binding rules, since these principles are coming under pressure from various sides.

The Indo-Pacific is a region where geopolitical rivalries and power shifts manifest themselves in a particularly striking way. China is expanding its influence there – and thus challenging the US and the rules-based order in the region. It is against this backdrop that Isabel Weininger and Lewe Paul analyse German and European policy in the Indo-Pacific region and highlight specific steps for intensifying security cooperation with key partner states. Beatrice Gorawantschy and Barbara Völkl take a detailed look at Australia’s position in the region – and explain how the country is strategically positioning itself as a “creative regional power”.

While the world is still grappling with the immediate repercussions of the coronavirus pandemic, its significance for a potential power shift in the realm of political systems is becoming increasingly clear. In their article, Anna Lena Sabroso-Wasserfall and Tom Bayes illustrate how China is trying to use the crisis to expand its ideological influence in Africa. It is presenting itself as a generous friend of African nations and a determined crisis manager, whose success in fighting the pandemic testifies to the superiority of its political system over that of liberal democracies. And when the Chinese Communist Party courts “friends” among Latin American political parties, as highlighted in the article by Sebastian Grundberger and Juan Pablo Cardenal, then here, too, it sells its authoritarian development model in an ever more aggressive way as a supposedly superior alternative to democracy.

Turkey is a key player in the power politics of the Middle East. Is President Erdoğan pursuing a revisionist, “neo-Ottoman” foreign policy, as some observers believe? Walter Glos and Nils Lange disagree with this view while also dampening the expectations of those who see a post-Erdoğan Turkey as a much less complicated partner for the West.

In the battle for influence, traditional sources of power﻿, such as military and economic strength﻿, play a central role. However, they are now joining forces with another increasingly vital resource: cyber capabilities. Hacker attacks, cyber espionage, targeted influence through fake news – the digital power struggle is being fought with a variety of means. As Christina Stolte and Jason Chumtong explain, their comparatively low-threshold access means that countries that were previously not considered global players can now gain international influence.

Times of global power shifts are tantamount to times of heightened tension. They create cracks in the international order and harbour the potential for conflict. In such an environment, it is also important for Germany and Europe to reassert their position in the world, as we can see that this position has long ceased to be guaranteed. We must actively defend it, not only in terms of our economic and political interests, but in terms of our values, too. We must consistently emphasise what we stand for and what we advocate: a multilateral, liberal world order.

I ﻿wish you a stimulating read. 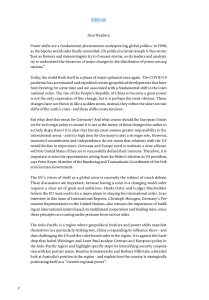