by Dr. Gerhard Wahlers
“Debacle”, “tragedy”, “political caesura”, “end of an era” – these are just some of the reactions by high-ranking politicians to the withdrawal of NATO troops from Afghani­stan in the summer of 2021. These words illustrate the sense of outrage at how the 20-year engagement in the Hindu Kush came to an end, while also pointing to the profound consequences for Western foreign policy as a whole. In this sense, Afghanistan is far more than “just” a mission with a disastrous ending. Rather, the events raise fundamental questions about how the West perceives its foreign policy and the future strategic direction of security and defence policy. That also applies to the debate about pros and cons of deploying troops abroad and of international interventions. The answers to these questions will have to be accompanied by concrete actions and changes.
February 8, 2022 1 Ordering Information

A wholesale rejection of international missions, as some have argued, cannot be a serious option for Germany. Carlo Masala, Professor of International Politics in the Department of Political Science at the Bundeswehr University in Munich, also stresses this point in an interview with International Reports, citing strategic and ethical reasons. He says the operations in Afghanistan and Iraq have highlighted the failure of “liberal imperialism”: the idea that we could export our political systems and establish them elsewhere.

The end of the Afghanistan mission also raises the question of what direction the German Bundeswehr will take in future – in an international environment not least shaped by Russian revisionism and the rivalry between the US and China. Nils Wörmer and Philipp Dienstbier explain how counterinsurgency and counterterrorism capabilities will continue to be important, but how changes in the threat situation demand a different focus. They believe this will require the Bundeswehr to restore lost national and collective defence capabilities so as to become the main guarantor of NATO’s conventional deterrence against Russia.

The events in Afghanistan also turned a spotlight on the mission in the Sahel region, and specifically in Mali. Politically, this operation has long been called into question, not least because Mali recently experienced two military coups and there were reports about a dubious relationship between its government and the Russian Wagner Group. But, as Stefan Friedrich explains, leaving the Sahel to its own devices in the current situation cannot be the way forward for Germany and Europe, since failure in this region would have a far more direct impact on our continent than events in Afghanistan. It will be important to set clearly defined goals over the long-term and to accept setbacks.

Lukas Kupfernagel and Thomas Volk also emphasise this point with regard to the situa­tion in Libya in the aftermath of the NATO-led intervention of 2011, which they state was necessary to protect the civilian population against violence threatened and carried out by the country’s ruler, Muammar al-Gaddafi. And yet, there is a lesson to be learnt from the recent history of this Mediterranean country, where foreign powers fuelled a proxy war without much restraint until the Berlin Process began in 2020. That lesson is that if foreign powers decide to intervene under the principle of Responsibility to Protect, it may be necessary to commit to the respective country over the longer term in order to avoid causing greater lasting harm than they had prevented.

The complexity of the considerations and difficulties faced by international actors when deciding whether or not to intervene is also illustrated by the examples of Iraq and Syria. Simon Engelkes and David Labude show how the US-led mission to overthrow Saddam Hussein after 2003 and the West’s largely passive approach towards the Syrian civil war that has raged since 2011, have led to (more than) unsatisfactory results. And finally, the “others” – Iran, Turkey, and Russia – have taken advantage of Western hesitancy in Syria to assert their own interests on the ground in alliance with or in opposition to Bashar al-Assad.

Another example is the conflict between Armenia and Azerbaijan over the Nagorno-Karabakh region. This has been simmering for more than a century and violently erupted again at the end of 2020. Thomas Schrapel looks at the origins of the conflict and at the different positions adopted towards it. Even during the recent armed conflict, the EU continued to exercise restraint, whereas not least Turkey provided military support to help Azerbaijan to victory.

Europe’s neighbouring capitals are well aware that military force can be a good way of achieving their aims. Politicians and the public in Germany and Europe would be well advised not to ignore this fact, despite the impression left by the Afghanistan withdrawal and the debate about a potential new direction for our foreign and security policy. As the articles in this edition of International Reports clearly highlight, there are no panaceas or black-and-white answers in this debate. It is evident that traditional collective defence is regaining importance, but at the same time there can and will be other developments and events that will require international missions on the part of the Bundeswehr and our Allies. These should be approached with clear, perhaps less ambitious goals, but backed up by the appropriate resources and a degree of strategic patience. 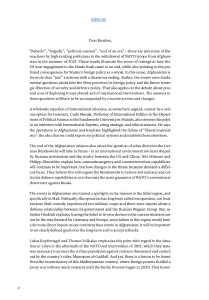