External and Internal Dangers of an Unfulfillable Promise

Sovereignty – often supplemented with attributes such as “strategic” or “European” – is currently being called for by many different political actors across Europe. Those, like the German Defence Minister Annegret Kramp-Karrenbauer, who take a differentiated or reserved stance towards this can expect to meet with criticism at the highest levels; for example from the French President Emmanuel Macron. At the same time, sovereignty is the key concept underpinning nationalist movements, which certainly do not see Macron as a role model. So, what is at stake here? Can we even achieve “European sovereignty” in the various policy fields? And is there a “good” (European) and “bad” (national) sovereignty?
January 6, 2021 Ordering Information

Erosion of Western Power and the Rise of China

What is at stake: Germany and the European Union are increasingly competing with other global players for values, prosperity, influence, and security. Competitive pressure has grown in recent years, driven by three main factors:

This competitive pressure has fuelled debates throughout Germany and Europe on how we can strengthen our resilience and maintain or even reinforce our position as an area of freedom, prosperity, and security. A common thread running through the debate is the realisation that it is essential for us to take on a greater responsability. It has focused, not least driven by French President Macron, on goals such as “strategic autonomy”, and “European or strategic sovereignty”. The misleading nature of “autonomy” has had a detrimental effect on our transatlantic partners, and this was not only limited to the Trump administration, despite various attempts at explanation. The concept has since receded into the background to some extent, while intense debate now rages about the “sovereignty” that Europe should seek for its security, digital space, or economy in order to achieve “independence”. “Strategic European sovereignty”, for example, is set to become the guiding principle undergirding the Green Party’s European environmental policy. The COVID-19 pandemic, and the resulting interruptions in supply chains, especially for medical devices and medicines, even led to calls for a “sovereign European health policy” being a leitmotif of the German Presidency of the EU Council in 2020.

How “Sovereign” Can and Should Europe Be?

The question arises as to whether the pursuit of “sovereignty” can be the right way for European politics to achieve its goals of freedom, security, and prosperity for EU citizens.

Historically, sovereignty refers to the nation state and its claim to independence and self-determination. Applying this concept to “Europe”, which for the most part means the European states united in the European Union, makes it seem more modern than the concept’s 17th century origins and its importance in forming nation states would suggest. It is based on the idea of comprehensive independence both externally and internally. Can we achieve or even expect European sovereignty when the basis of the European Union has been the limited transfer of national sovereignty to community institutions since the beginning of European integration?

If we consider the facts, this seems more than uncertain: EU member states still view the area of foreign and security policy in particular as a core part of their national sovereignty. The EU permits and expresses a desire for cooperation but leaves final decisions to the states. France, for example, has repeatedly made it clear where the limits lie when it comes to whether it would be prepared to regard its permanent seat on the UN Security Council as an EU seat; namely, in national sovereignty. On the other hand, investing in common military capabilities and future technologies is crucial for Europe’s security. These would have to be dispensed with at the national level, and then superseded by a common position and common action in the formation of security policy interests. This would help strengthen European interests in the transatlantic alliance and, to a greater extent, against external threats. However, we cannot achieve “sovereignty” in this way. The US﻿ will continue to be indispensable for Europe’s security interests, with powers such as Canada, Australia, Japan, or India also playing an important role as democratic partners safeguarding the liberal model and fair global competition. They need a strong EU that is capable of taking action.

The digital sphere presents a similar picture: Europe must invest more in innovation and implementation, while its societies need to be empowered for the digital age. This will help them maintain or even improve their economic and political ability to shape our digital future. This includes Europe’s ability to set globally recognised standards for the digital age, which are essential for trustworthy innovations and liberal development. At the same time, Europe must also be able to translate its values into commercially successful business models and products in order to enforce them.

In addition to the exemplary role played by the General Data Protection Regulation (GDPR), it was also the sheer size of the EU internal market that triggered global processes to reshape data protection in the digital age. Not only has this set a European standard whose enforcement and practical shortcomings will certainly have to be improved in the future, it has also established an international standard for the digital age. The strong EU internal market and the common trade policy are beneficial for both the European economy and Europe’s values. In China and other authoritarian states, “digital sovereignty” is understood as state domination and control over the digital sphere.

Yet, for those propounding the concept of European strategic sovereignty, it is the answer to Europe’s vulnerability to external pressures owing to declining support from the US﻿. Despite recognising the dependencies and interdependencies as well as the importance of the transatlantic alliance, they would like to see a sovereign EU in many areas. Having said that, an increasing number of players consider the terminology to be “toxic” and call for an “agenda of action” in lieu of such debates about terms.

The Risks of the Sovereignty Debate

Despite and especially following the ﻿COVID-19 pandemic, the world will continue to present itself as increasingly interconnected and thus vulnerable. This means that concepts such as “independence”, “autonomy”, or “sovereignty” are less likely to be realised than ever before. Accordingly, especially non-European partners are looking at the European debates with irritation and are waiting for action.

However, there are further dangers confronting Europe. The primary danger is the populist and nationalist movements and parties in Europe who have declared it their goal to “regain” national sovereignty and end “rule from Brussels”. Movements which have voiced this goal mobilise support on the streets and at the ballot box. “Take back control” has not only been the rallying cry of the successful Brexit campaign, but is being used in Europe by both left- and right-wing nationalists alike. It is clear that countries in Central, Eastern and South-Eastern Europe are particularly reluctant to transfer sovereignty, which they only regained in 1990, to the European level. In this respect, the sovereignty debate poses two dangers within Europe. On the one hand, opponents of European integration could manipulate it to conjure up the danger of a European superstate and thus the end of the nation state. Emotions, even anger, might be mobilised against this. Whereas expectations of sovereignty and thus independent decision-making powers are raised that cannot realistically be achieved. Anger and disappointment among large swathes of the EU population have already caused much damage over recent years. We need to prevent this.

Therefore, Europeans should direct political, communicative, and economic energies towards strengthening their own power resources, namely defence capability, innovation capability, the internal market, and the democratic capacity to act. This would represent the best offer to the US﻿, whose incoming administration is willing to cooperate for a more successful mutually beneficial partnership. This is realistic, serves our interests, and can garner the support of EU citizens, who, ultimately, are the central power resource in a liberal democracy. The conference on the Future of Europe proposed by EU Commission President Ursula von der Leyen, should provide the backdrop, alongside the EU Parliament and member states’ legislatures, for the necessary positioning. This would help to develop the very means and capabilities to preserve European ideas of values and order, and to harness them successfully to strengthen the liberal order and our interests at the international level.

Dr. Peter Fischer-Bollin is Head of the Konra﻿d-Adenaue﻿r-Stiftung’s Analysis and Consulting Division. Choose PDF format for the full version of this article including references. 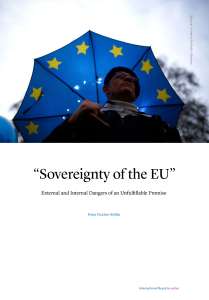