On June 11, 2020, the Moldovan parliament passed the new “Law on Non-Governmental Organizations” (NGO law). It quickly became a bone of contention within the government led by the Socialist Party (PSRM). A reform of this law was mentioned as a prerequisite for further macro-financial assistance by the EU. The main innovations concern rules for the support of political parties provided by NGOs. Close to a month after its adoption, the official legal text is still not available, however key elements are known and are briefly presented below.
July 6, 2020 Ordering Information

A first law regulating the work of non-governmental organizations was passed in 1996, a few years after Moldova became an independent state. A reform of the previous NGO law became necessary due to the 2019 reform of Moldovan civil law and the growing need for a simpler registration and administration of non-governmental organizations (NGOs), as well as for the clarification of the ways and the circumstances under which NGOs may provide support to domestic political parties.

The draft law was adopted in the first reading as early as April 2018. In the discussion about a new Moldovan NGO law, however, there were strongly divergent reform approaches, which at that time (under a government led by the "Democratic Party of Moldova") generated the worry that the activities of civil society organizations, including foreign foundations, could be restricted. 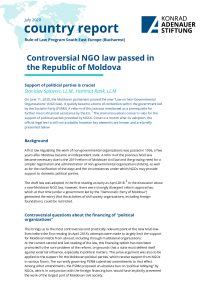 Controversial NGO law passed in the Republic of Moldova
Download