The project activities of the Konrad-Adenauer-Stiftung’s office in Amman are based on close cooperation with Jordanian civil society, particularly non-governmental organizations, as well as institutions that are associated with the Royal Court of Jordan (Prince Hassan).

The study and dialogue visit in Germany aimed at strengthening the relations with the foundation’s key partners as well as new important civil society partners. Moreover, we intended to foster cross-linkages between our partners.

The focus of the study and dialogue visit was based on the KAS partners’ key fields of interest. Firstly, issues of security and regional policy were of primary interest to the partners. Therefore, the program of the study visit included visits of leading German think tanks on international relations as well as discussions with prominent politicians in the area of German policy towards the Middle East. Secondly, by addressing the question of immigration of Muslims to Germany, fundamental aspects of interregional and intercultural dialogue were emphasized. The participants were also informed on the German way of decentralization, i.e. the concept of federalism, as well as the concept of Social Market Economy.

•Rolf Harlinghausen (Chairman of the Committee for „Europe, Town Twinning and International Affairs” of the Parliament of the State of Hamburg)

•Bettina Machaczek (CDU Faction Member of the Parliament of the State of Hamburg, CDU Speaker for Integration, Hamburg)

•General Staff Colonel Rainer Meyer zum Felde (Head of the Department of Security Policy and Strategy of the Leadership Academy of the German Armed Forces, Hamburg)

•David Gregosz (Coordinator for Basic Issues/Regulatory Policy in the Department of Politics and Consulting of the Konrad-Adenauer-Stiftung, Berlin)

•Dr. Karen Horn (Head of the Berlin Office of the Institute for Economic Research, Berlin)

•Ruprecht Polenz, MP (Chairman of the Committee on Foreign Affairs of the German Parliament, Berlin)

•Dr. Muriel Asseburg (Head of the Research Team “Middle East and Africa” of the German Institute for International and Security Affairs, Berlin)

•Dr. Georg Kleemann (Head of the Cabinet and Parliament Department of the Federal Chancellery, Berlin)

•Professor Barbara John (Coordinator for Language Promotion in the Senate Administration for Education, Science and Research, former Commissioner for Foreigners of Berlin, Berlin)

•Gabriele Hauser (Head of the Department M (Migration, Integration, Refugees, Harmonization) in the Federal Ministry of the Interior, Berlin)

•Gabriele Baumann (Head of the Team for Interior Programs of the Konrad-Adenauer-Stiftung, Berlin)

The meetings at GIGA with Professor Dr. Robert Kappel and Professor Dr. Henner Fürtig in Hamburg were among the highlights of the first program focus tackling German security and regional policy. The participants also enjoyed the chance to meet General Staff Colonel Rainer Meyer zum Felde at the Leadership Academy of the German Armed Forces. In Berlin, the group had the great opportunity to meet with two members of the German Parliament, Ruprecht Polenz and Joachim Hörster, and with Dr. Muriel Asseburg from the German Institute for International and Security Affairs.

Three key issues emerged during the talks. The Jordanian group emphasized the generally positive perception of Germany in the Middle East. They also emphasized the perceived role of Germany as a potentially strong actor in the international system even prior to the “little economic miracle” in 2010. The group members’ perception was linked to the hope that the federal government further increases its political leverage in the Mediterranean. The group’s members also discussed with their German counter-parts strategies whereby German foreign policy towards the Middle East could emerge through European channels and transatlantic cooperation. The Jordanian participants en-couraged Germany to articulate their genuine positions in a clear-cut way and implement them within the framework of the European Union. Following the study visit, Oraib Al-Rantawi expressed this view in an article published in the leading Jordanian daily Al-Dustur on November 20, 2010

The issue of German policy towards Israel also played an important role in all talks. The Jordanian group expressed understanding of the historically-induced special relationship of Germany with Israel. The German side made clear that the German Middle East policy is always committed to the aim that Israel within secure borders maintains its firm position as a legitimate state in the Middle East. On the part of the Jordanian delegation this position was not called into question. However, at the same time it was recommended that this approach should be limited to the state of Israel within the borders of 1949. The Jordanian group expressed its expectation that a value-based German foreign policy should oppose Israeli policies violating principles of international law and the right of the Palestinians to self-determination.

During a lively roundtable discussion at the Leadership Academy of the German Armed Forces, the Jordanian group contested the Academy’s approach that Germany should base its security policy on a perceived immediate threat posed by the Islamic Republic of Iran. Among others, the following aspects on the motivation of the Iranian nu-clear program were discussed: While the representatives of the Leadership Academy emphasized Iran’s aggressive rhetoric, the Jordanian delegates pointed out that the regime in Teheran acts due to a threat percep-tion of the US American military presence in the Gulf States, Afghanistan and Iraq. The positions notably differed also with regard to suggested solutions: While the German side expressed its view that the Iranian nuclear program must be terminated, leaving debates only the issue whether this aim could be achieved by peaceful means, the Jordanian group favored a holistic solution for the entire region. According to the group, for the sake of a settlement, the Israeli nuclear weapon arsenal should also be opened up for question.

The most important discussion partners for the second major topic, the integration of Muslims into German society, were MP Jürgen Klimke; the Speaker of the CDU in the Parliament of the State of Hamburg, Bettina Machaczek; Professor Barbara John; and Gabriele Hauser, Head of Section of the Ministry of Interior, as well as two noted practitioners in the field of German integration policy, Thomas Helfen and Mohamad Zaher.

Firstly, the meetings served the purpose to clarify the misunderstandings following Chancellor Angela Merkel’s claim that “multiculturalism” has failed in Germany: In the Arabic media and public debate, Merkel’s statement was received in a distorted way and misinterpreted as a plea to terminate integration efforts in Germany. Yet, particularly Jürgen Klimke and Bettina Machaczek rectified that quite on the contrary the Chancellor’s intention is to strengthen integration by both promoting and challenging immigrants. Barbara John then illustrated that the overwhelming majority of immigrants in Germany is well integrated. She added that the reasons of integration problems do not primarily stem from religious affiliation. Rather, they are mainly related to socioeconomic factors: the social background of those who face integration problems is characterized by modernization deficits of the originating countries. The consequences for the affected immigrants and Germany as their hosting country can only be surmounted by a long-term integration policy. Since the problem of a low socioeconomic background among migrants in Germany particularly applies to Muslim immigrants, the integration debate often refers to their religion, which, however, does not tackle the core of the problem.

Against this background the Jordanian group raised two central aspects of the debate: Firstly, if integration problems are not genuinely connected to religion, to what extent does the approach of the German Islam conference makes sense? Head of section Gabriele Hauser and her staff clarified within this context that the advocacy groups of immigrants themselves indicated their interest in conducting the discourse on the basis of their affiliation to Islam. Secondly, the Jordanian group introduced the dimension of international politics into the discussion: According to their opinions expressed in the discussions, Western policies towards the Arab-Israeli conflict as well as other violent conflicts in the Middle East, such as in Iraq, contribute to alienating particularly Arab immigrants in Germany from their new home country. Ambassador Hasan Abu Nimah commented on this aspect in an article in the Jordan Times, the most important English-speaking newspaper in Jordan, published on the occasion of the trip to Germany: “We also emphasised that those who had the chance to escape the troubles at home into safer European sanctuaries, must have carried with them their frustrations, as well as their resentment of the direct Western countries’ responsibility towards the prevailing instability and injustice in our region.” (http://jordantimes.com/index.php?news=31508).

Beyond the central focus of the visit, the Jordanian group had the opportunity to deal with two additional key topics: the concept of Social Market Economy and the federal structure of Germany’s political system. Within these issues, the most important discussion partners were Dr. Karen Horn, David Gregosz and Rolf Harlinghausen as well as Dr. Georg Kleemann.

The study visit’s program was rounded off by a tour d’horizon over the whole spectrum of subjects of the journey with the Deputy Secretary General of the Konrad-Adenauer-Stiftung, Dr. Gerhard Wahlers, and the Head of the Team for Interior Programs of the foundation, Gabriele Baumann. The Jordanian group took the opportunity to intensively communicate with high-ranking representatives of German politics and civil society. The group considered the visit as a very positive and useful tool for deepening cooperation with the Konrad-Adenauer-Stiftung in Amman. 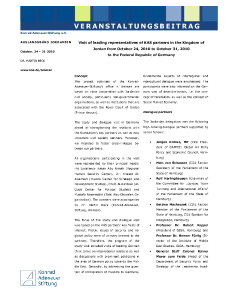