On 1st of February 2012 resident representative of KAS Amman Dr. Martin Beck was invited to give a guest lecture entitled “Opportunities, Problems, and Challenges of Oil-Producing Countries: Lessons learned from Rent Theory, and Empirical Cases,” at the Department of Political Science of Salahaddin University Erbil, Iraq/Kurdistan. In his lecture Dr. Beck discussed the problems which are caused by external rents through the production of oil and presented policy recommendations to oil-producing countries.
February 25, 2012 Ordering Information

Konrad Adenauer Stiftung Amman/KAS Amman, represented by Dr. Martin Beck, holds strong ties to various civil society organizations and universities in Iraq. Among them is the Salahaddin University in Erbil (Hawler), Kurdistan, in particular the Department of Political Science, headed by Dr. Sabah Sobhi Hayder. Due to this close partnership, the academic and political relevance of the topic, and because of Dr. Beck’s experience acquired in his previous assignment as a researcher in contemporary Middle East Studies; Dr. Beck was invited by Salahaddin University to give a lecture entitled: “Opportunities, Problems, and Challenges of Oil-Producing Countries: Lessons learned from Rent Theory, and Empirical Cases,” on the 1st of February, 2012 at the campus in Hawler. The lecture was hosted by the Department of Political Science and deeply supported by the President of Salahaddin University, Dr. Ahmad Anwar Dezaye, as well as the Dean of the College of Law & Politics, Dr. Hussein Tawfik. In addition to the high-ranking representatives and academics of the University, approximately 200 students attended the lecture.

The lecture entitled “Opportunities, Problems, and Challenges of Oil-Producing Countries: Lessons learned from Rent Theory and Empirical Cases,” focused on issues that are of utmost importance to (Kurdish) Iraq as an oil-producing country. Dr. Martin Beck subdivided his presentation in five parts: A presentation of a research puzzle, followed by an introduction to rent theory and a discussion of empirical insights. Subsequently he presented critical policy issues of oil-producing countries and concluded with observations on the proper management of oil wealth.

The research puzzle dealt with the counter-intuitive fact that most oil-producing countries—albeit in possession of a valuable resource that generates high income—very often struggle with low performance both in the political and the economic realm: There are very few “oil democracies” and most oil countries fail to establish economic systems generating sustainable growth.

Rent theory helps to explain the aforementioned puzzle. The bulk of oil income is composed of rents. A rent is an income that is not balanced by investment or labor. There is a huge gap between the oil price and the capital and labor invested to produce oil. As François Seznec (2008 in Middle East Policy) calculated, the production costs of one barrel in the Gulf region is between 1.5 and 8 USD. The gap to the actual oil price constitutes the rent. Why are rents problematic? Firstly, they are at the free disposal of the recipient since no investment is needed to generate future rent income. Moreover, oil rents usually go to state bureaucracies whose strategies to gain legitimacy are fairly unconstrained. The mechanism “No Taxation without Representation” does not work.

Secondly, rents cause structural heterogeneity. Since the oil sector is far more productive than all others, the rest of the economy is in danger of becoming crippled (Dutch disease). This results in low investment in productive branches, an overvalued currency, and high unemployment rates. In this context, Dr. Beck pointed out that pure market economies do not provide remedies for Dutch disease.

Dr. Beck then presented two preliminary findings that he put as challenges for oil-producing countries. Firstly, high oil income tends to constitute a state that is both too strong and too weak. It is too strong vis-à-vis its own society and too weak to solve the socio-economic problem of structural heterogeneity. But, he also pointed out that all what has been said about the rentier state only applies if all other economic and political conditions remain constant (ceteris paribus clause).

Secondly, Dr. Beck pointed out that all his findings are based on the assumption of consequentialist rationalism rather than cultural essentialism. From an analytical perspective, this is decisive because contrary to cultures, structures are more appropriate to be changed. From a normative perspective, it appears that to ask for structural rather than cultural change is not degrading to the target.

In the third part of his lecture, Dr. Beck presented empirical insights from oil-producing countries grouped along six main issues: weak democratic institutions, strong security apparatuses, weak civil societies, weak private sectors, high degrees of corruption, and low degrees of compliance with international rules and standards. Yet, there is at least one major exception: Norway. Moreover, the structural problems related to oil-production vary. Thus, the political system of Venezuela and Iran are more open than Saudi Arabia’s. The same holds true of Kuwait in comparison to Libya before 2011. Furthermore, for instance Oman is much less repressive than Algeria. Dr. Beck concluded from these findings that good governance is possible in oil countries.

Dr. Beck then presented policy recommendations to oil-producing countries along the lines of the six issues elaborated on previously:

2.Strengthen human security: Base the state monopoly of power on the rule of law, combat militias, and avoid politicization of the army.

4.Strengthen the private sector: Promote private businesses aspiring to international competitiveness, strengthen small-scale rather than big business, and restrict activities in non-productive sectors (such as land and housing).

Dr. Beck concluded by recognizing the opportunities, problems, and challenges of oil-based economies are unique and complex compared to others. Oil-based economies tend to be highly politicized, thus, good governance is of utmost importance. Oil wealth is neither a curse nor a blessing. It is a resource whose proper use is a challenge and requires a policy of particularly adept, institutional prudence.

A lively and fruitful discussion followed Dr. Beck’s lecture. The contributions of the representatives and the students pointed especially to the cultural challenges most oil-producing countries in the Middle East are facing. It was emphasized that a long tradition or culture of non-democratic rule in many Middle Eastern states increases the difficulties to overcome the structural problems oil resources might evoke.

The lecture by Dr. Beck addressed a topic of significance to many Middle Eastern states. Due to high resources of oil, many countries in the region are exposed to structural challenges. Whether they are successful in overcoming these challenges and, hence, whether they will develop efficiently, highly depends on the way these oil-producing states construct their political, social, and economic systems.

The number and content of the questions posed to Dr. Beck by the representatives of the university and the students is reflective of their interest in the topic as well as their appreciation of the presentation. As a result, the lecture can be seen as a significant success in the partnership between Salahaddin University and KAS Amman. 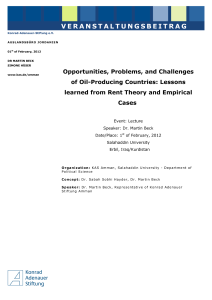