Definition of key media terms and how to use them

The definition of press news:

Session 11: How to Write Political News

The reportage and its presentation in radio news

How to present projects in journalism

Jordanian policy nowadays is concentrating on developing the capacity building of its young population in different aspects of life covering political, economical and social aspects. With the increasing interest of Jordanian young population in media as a means to express opinions and views towards a better, democratic and just society, KAS Amman office organized with Arab Women Media Centre a regional workshop entitled “Media for Youth” from July 7th to 13th, 2010, at the Media Training Site which was established by AWMC.

Ten students from different areas in Jordan interested in journalism and audio visual presentation were chosen to participate in the training course which was conducted by high professional media representatives. The main objective of the workshop was to acquaint the students with the technical side of media industry as well as to shed light on the importance of political subjects in media. In the course of the workshop, issues such as democracy, human rights, freedom of expression, rule of law, and participation in political life were raised and elaborated by the participants.

Dr. Martin Beck, the Resident Representative of Konrad-Adenauer-Stiftung (KAS) in Amman, opened the workshop by outlining one of the general goals of KAS, namely the encouragement of political participation of the younger generation and the dedication to the principles of freedom of press and speech. He pointed out that media plays an important role in modern society and politics. He also encouraged the students to report on political events in an independent and critical manner. He clarified that both KAS and AWMC aim to empower the young generation by showing them ways of how to participate and articulate oneself in a productive way.

Ms. Mahasen Al Emam, Chief Executive Manager of the Arab Women Media Center (AWMC), began her welcome speech with an introduction of her center and a short presentation of the workshop. She then underlined the importance of media in social and political affairs. After that she concluded by asking the students to present at the last day of the workshop a comprehensive project on whatever they learnt during the previous days.

The journalist Ms. Samar Haddadin from Al Rai Newspaper introduced in her contribution the definitions of media terms and how they should be implemented in journalism. She also taught the students the definition of the press news specifying the differences between reports, articles, interviews etc.

She encouraged the students to read, hear or watch all political or social news to increase their awareness and understanding of what is going on in society. She also underlined the importance of using clear, good and accurate language when communicating an idea. She said also that media today is open to everyone through blogs, twitter and youtube; and through the existence of websites which is so fast that the news are transmitted in seconds. Therefore, it is very important for a journalist to question the credibility of news before reporting or commenting on them. After the lecture, Ms. Haddadin discussed with the students the upcoming elections in Jordan.

The second trainer, the journalist Ms. Eman Abu Qaoud, talked about the concepts of different media: print, audio, video and electronic. She also shed light on the importance of each concept and together with Ms. Haddadin called the students to be pioneers in using media to express their political or even personal views without re-strictions or fear. She also encouraged the students to use simple and clear language taking in consideration the audience they are addressing. Additionally, she warned the trainees of reporting some old news and pretending they are new. Ms. Abu Qaoud also talked about the journalistic skills of civil society organizations.

Mr. Emad Nusair from Jordan Radio and TV trained the students on presenting news in radio and TV. Then he talked about the nature and particularities of news reports and the difference between news and other TV programs. He then elaborated on the preparations preceding news reports.

Mr. Nusair presented the art of interviewing and explained to the trainees the differ-ence between the questions to be asked during an interview, and how to deal with the camera and the transfer between the cameras.

Mr. Emad Selsa from Radio El Balad dealt with the technical side of the training. Each day he helped the students to turn the theoretical training into a practical one by using the studios at AWMC.

He supervised the students while preparing a one-day radio program which covered all kinds of news such as main news reports, interviews, arts and sport news and reportage. He also taught the students how to promote radio news programs.

At the last day of the workshop, Ms. Al-Emam and Dr. Beck presented a certificate of participation to the trainees who had been working together during one week.

The seven day workshop covered an issue that is central to the work of Konrad-Adenauer-Stiftung. The freedom of speech and the independence of media are at the core of every democratic society. The mission of this training was to broaden the awareness among the youth for the important role of media.

The participants had the chance to learn from acknowledged experts about the functioning of media processes and the rights and duties of journalists as well as about the experiences they made in their professional life in journalism. In practical training units, they could apply what they had learned.

In their future work in journalism the participants of this workshop will be capable of contributing to promote democracy and human rights in Jordan. 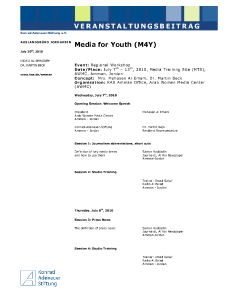