The Arab Spring and its Impact on Women - Foundation Office Jordan

The Arab Spring and its Impact on Women

Women played a crucial role in the long years of resistance to dictatorships. The movements of the Arab Spring have given them unprecedented visibility; women are now confronting attempts to exclude them from decision-making processes and the public sphere through discrimination and violence. With regard to this development, KAS Amman and Jadal Media Training Center organized a round table discussion aimed at giving key insights on the Arab Spring and its impact on women’s rights.
July 11, 2013 Ordering Information

Session 1: Media and its Coverage of the topic of Arab Women during the Crises

Consultant and Researcher of Woman Issues

The Jordanian National Commission for Women

Although the situation of women varies across the region, threats to their human rights converge.

Women played a crucial role in the long years of resistance to dictatorships. The movements of the Arab Spring have given them unprecedented visibility; women are now confronting attempts to exclude them from decision-making processes and the public sphere through discrimination and violence. This round table discussion aimed at giving key insights on the Arab Spring and its impact on women’s rights.

Ms. Nidaa Shraideh, on behalf of Dr. Otmar Oehring, Resident Representative of KAS Amman, opened the round table discussion that was attended by a group of selected writers, journalists, and specialists in the field of media and women's issues, by referring to the belief of Konrad Adenauer Stiftung to disseminate awareness of various societal issues, including the problems facing Arab women in general and Jordanian women in particular. Ms. Shraideh pointed out that this activity, which is the first cooperation between KAS and Jadal Media Training Center, will shed light on the presence and significant role of Arab women in the Arab uprisings and discuss the role of media in supporting women in their seek for more essential rights.

Ms. Suhair Jaradat, advisor at Jadal Media Training Center, stressed the importance of the workshop in tackling women’s concerns, especially in the light of change that has occurred in the Arab world with the so-called “Arab Spring”. She also called upon the need to pay more attention to the various needs of women, and to spread awareness of these needs in media in order to cope with the recent developments in the region.

Ms. Abla Abu Olbah, a member of the Jordanian People’s Democratic Party and Former Member of Parliament, spoke about the atmosphere which prevailed during the Arab Spring in the different countries and the interest Arab women have in the revolutions after being deprived for decades from political participation.

She stressed that “now, it is time to develop our address towards women, taking into account the practical aspects in defending their causes,” arguing that this phase is dominated by disorder which shows the need to establish constructive strategies for the post-revolutionary period, respectively the transition phase.

Mr. Hazem El Khaldi, a journalist and analyst, talked about media and the way it presents the issues of Arab women in light of the crises. He argued that although women had played a prominent role in the process of change that took place in the Arab world they were exposed to negative practices which the TV channels aired directly during the protests. They were harassed, beaten, and chased out of public spaces. In this context, he further pointed out that “the scene was not so different after the fall of the dictatorships since old barriers of segregation went rapidly up”. As a result, female representation in parliaments and government cabinets after the Arab Spring decreased for example; in Egypt, less than 2 percent of the deputies are women; in Libya, a draft law ensuring women’s quota in parliament was abandoned; in Tunisia, 49 women are Members of Parliament with 42 of these women are being members of Ennahda, the Islamist party. In Yemen, women faced threats of kidnapping, defamation, and scornful criticism from both the ex-regime and the revolutionaries, as it happened with the president of the Arab Spring party, the first Yemeni party which was founded and headed by a woman.

Indeed, the Arab revolutions suffered harsh setbacks and their outcome, especially, regarding women’s rights and their standing within the society, can not be predicted yet.

However, at the same time, it should be seen that the revolutionary movements brought about a fundamental change on the status of women in some Arab countries. In Jordan, the quota of women in the 17th House of Representatives was raised to be 19 women instead of 12. In Saudi Arabia and for the first time in history, 30 women were added to the Council of Shura which is equivalent to 20 percent of the total members (150 members). In Yemen, a Yemeni activist was one of the winners of the Nobel Peace Prize.

Taking these facts into consideration, Mr. Al Khalidi questioned whether the media presented the topic of Arab women in the Arab Spring in an appropriate way.

In this context, he elaborated on how media treated the ongoing internal campaign for women’s rights and pointed out that there were three distinct media narratives of womens’ role or position in the Arab Spring. The first conveyed a new image of Arab women and celebrated their successes in the uprisings, by stating that women played a prominent role - without their presence victory would not have been possible. Images of women as activists and as protestors proliferated on the Internet, particularly in social media networks such as Facebook and Twitter.

The second narrative is rather sceptical, saying that the “Arab Spring” brought either limited gains for women or potential risks vis-à-vis women’s status previous to the revolutionary movements. It is questioned whether the new, “democratic” governments in the Arab world will be more conservative on gender issues than the dictatorships that they replace.

The last narrative of the role of women in the Arab uprisings goes in line with a discriminating attitude towards women. It claims that women are violating Islamic instructions and that the life of women should be restricted to fulfil a highly restricted role pointing to the task of raising the children and taking care of the household.

He concluded with indicating that the media should take up women’s issue and urge continued support for women’s rights throughout the region without leaving this task in the hands of NGOs only.

Dr. Akef Maaitah, an advocate, consultant, and researcher in the field women studies, tackled the laws and legislation supporting women's rights in Jordan. He pointed to the important role played by women’s organizations as well as civil society institutions concerned with human rights in changing laws and legislation in Jordan. Dr. Maaitah emphasized: ”We should not deny the major supportive role of their Majesties the King and Queen in women's issues, knowing that HM King Abdullah II had often emphasized the necessity to promote and protect women’s rights out of his belief in the important role of Jordanian women in the progress of society”.

In order to conform with international conventions related to women and human rights, several laws were amended, ratified, and published in the official gazette to be part of the national legislation. This refers to the principle that Jordan incorporates international law in case of contradiction, a decree that has been confirmed by several decisions issued by the Court of Appeals.

At the end of the seminar the participants summarized the following points: 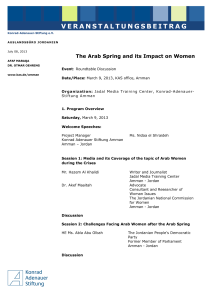 The Arab Spring and its Impact on Women (Pdf)
Download