“ASEAN at 50: Charting the Future Together”

On October 2, KAS Regional Programme Political Dialogue Asia’s long term partner, the ASEAN Studies Centre of ISEAS Yusof-Ishak Institute in Singapore, hosted this year’s ASEAN Roundtable. In the year 2017, the event was of course all about the ASEAN jubilee.
October 2, 2017 Ordering Information

In his opening remarks, Christian Echle, Director of KAS PDA, identified a 50th birthday as timely and appropriate to reflect the past, but also to look ahead. In that spirit, the Roundtable “ASEAN at 50: Charting the Future Together” assembled four distinguished panels at the Raffles City Convention Centre in Singapore.

The ASEAN Secretary-General, Le Luong Minh,himself delivered the Keynote Address. ASEAN was born from aspirations for regional peace and successfully bringing together nation states in one of the world’s most diverse regions. This was a historic achievement in itself, he remarked. While the ASEAN Community project signaled the political will to address common problems in unity, the greatest challenge to that ASEAN unity and its resilience was navigating between and with the major external actors.

In that light, panel three for example investigated ASEAN centrality. Singaporean Ambassador-at-large Bilahari Kausikan shared his skepticism regarding ASEAN’s central role in the wider Region. Centrality would be meaningless unless ASEAN made painful and difficult adjustments to its processes. Former Permanent Secretary at the Bruneian Ministry of Foreign Affairs and Trade, Pengiran Dato Paduka Osman Patra, added that ASEAN must take on active responsibilities of leadership if meaningful centrality was to be achieved.

The 32nd Roundtable ended with a highlight, as two ASEAN greats, Tan Sri Dato Seri Dr Syed Hamid Albar, former Foreign Minister of Malaysia, and Dr Marty Natalegawa, former Foreign Minister of Indonesia, conversed on what the next decade would bring for ASEAN. At the end of an engaging, insightful dialogue, both agreed that ASEAN’s “constructive engagement” of national governments, meaning a greater role for ASEAN in national affairs, would achieve best outcomes for ASEAN. But this required strong investment and readiness by all ten ASEAN states.

For the benefit of ASEAN, participants were frank in discussing developments, positive and negative, past achievements and failures, as well as future challenges. The Konrad Adenauer Stiftung’s PDA is proud to have been partnering with the ASEAN Studies Centre to convene one of its flagships events. We are already looking forward to the 33rd edition of the annual ASEAN Roundtable in 2018. 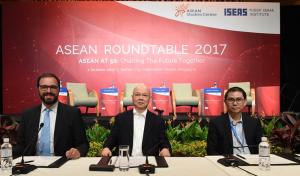 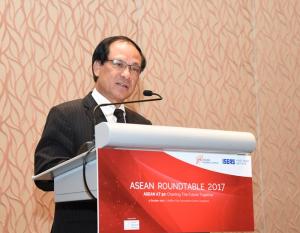