Digitalization Likely to Reshape the Cooperation between Asia and Europe

Is digitalization still the purely positive force it was long perceived as? In light of recent developments, this rather romanticizing concept has to be critically examined. Digitalization is already and will continue to impact key elements of politics and society. Developments in the digital space will increase the connectivity – with both positive and negative consequences. Since connectivity is the main theme of the Asia-Europe Meeting (ASEM), the question of digitalization was at the heart of this year’s 19th Asia-Europe Think Tank Dialogue on 15 and 16 November 2017 in Yangon / Myanmar.
November 16, 2017 Ordering Information 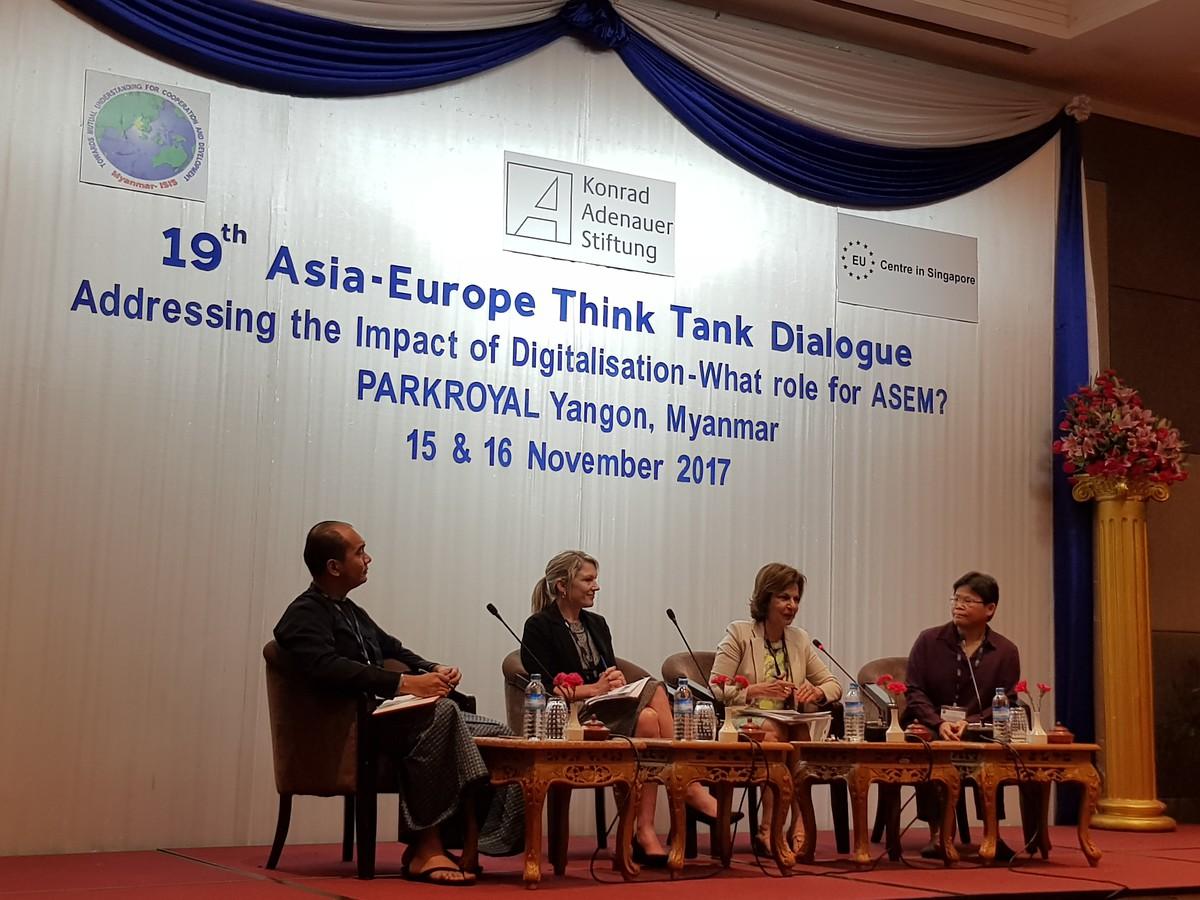 At the dialogue entitled “Addressing the Impact of Digitalization – What role for ASEM?”, think tank representatives from 18 countries analyzed expectations for the 13th ASEM Foreign Ministers’ Meeting, the current status of ASEM and discussed the effects of digitalization on selected spheres. The Myanmar Institute for Strategic and International was the local partner in the host country.

The Asia-Europe Meeting in the 21st Century

The opening panel discussion highlighted that ASEM has to be recognized for what it is - an open process with comprehensive dialogue on security, political, social and economic affairs. It is important to look beyond the summits and see the sectoral discussions which complement the leaders-driven meetings. These sectoral exchanges are often more concrete and productive. At the same time, the recently introduced retreat sessions for leaders are important as they ensure the informality which is a key characteristic of ASEM.

The main challenge the process currently faces is the proliferation of fora since the institutional euphoria in the 1990s, and the now again increasing great power politics. While the focus of big powers on unilateral approaches challenges the core of fora like ASEM, it also provides an opportunity for a re-examination of multilateralism and the rules-based order. ASEM is well prepared for this debate after moving from an alliance character to softer ad-hoc coalitions and a network style. In this way, ASEM could become less bureaucratic and more practical. This will also help to overcome a silo approach, thus enabling ASEM to be more innovative. Given the broad membership of 53 nations, ASEM includes members of various other fora and could function as a platform to connect all these groupings, turning ASEM into a hub. The 2016 summit in Ulaanbaatar was, in this regard, a defining moment as the leaders re-defined ASEM and enforced its focus on connectivity. Connectivity can become a main tool to turn unilateral initiatives such as the Belt and Road into global goods and incorporate them into a multilateral setting.

Forms of digital communication have changed the way politics and societies interact. While this provides great possibilities for participation, self-organization and engagement, challenges created by the dissemination of false or at least selective information result in growing mistrust in governments. Digitalization makes politics more complex, volatile, ambiguous/uncertain and imbalanced. It is thus necessary to increase collaboration, seek improvements and search for opportunities this development might offer. At the moment it seems that digitalization has mainly increased the radicalisation and polarisation of societies and ultimately led to the rise of populism. Politicians use social media, bloggers and influencers to portray a certain image of them, disseminate their message and thus influence perceptions. They can also use their countries diaspora and easily mobilize these people for political means as they do not experience the situation on day-to-day basis. Often the direct links between the respective candidates and the social media platforms are not obvious or transparent. Many users also flee into anonymity and portray themselves as the defender of the real truth which would no longer be reported by traditional journalists. Social boots are not only used by populists, but also by their critics and this makes it difficult to judge what is true and to understand who is behind a certain message. It is thus necessary to enhance digital literacy and promote ethical use of digital forms of communication. From the side of the state, we can observe attempts to control the digital space, limit the freedom of expression in it and use it mainly as a tool to collect data of its citizens. Another risk of the internet is that states use it as an excuse and blame online access for problems such as radicalization. But by doing so, they ignore the real reasons. The relationship is further complicated by the increased use of artificial intelligence. These challenges do not mean that positive impacts of digitalization should be ignored, but governments must be prepared for these pitfalls and have policies in place to avoid them.

Digital Opportunities & Transformation in the Economy

Economic connectivity goes beyond the physical connectivity of infrastructure projects with digital connectivity being one of the key areas to look at. Digital economy offers people in remote areas access to information and goods which they previously did not have. Sharing economy has a strong digital dimension and allows for a more efficient use of resources. Besides these opportunities of digital economy, challenges arising from this development have concrete impacts on societies as well as the workforce. Governments, therefore, need an overarching policy framework for digital economy that protects jobs, teaches workers new skills and provides incentives to businesses to create jobs in the digital sphere. Digital economy is an opportunity to fight youth unemployment which is high in numerous countries. These digital natives possess the necessary skills and in the right environment, might be able to become creative entrepreneurs. While digitalization can also create new jobs and provide people access to the labor market, a number of these jobs are informal and can thus result in precariousness due to the lack of social security.

Impact of Digitalization on Education

Digitalization has diverse impacts on education and research. The increasing availability of data and documents enable experts to do more in-depth and comparative research. Digital modes of communication enhance the opportunities for joint research projects as experts can interact personally, but also remotely. It might even result in the digital connectivity of ideas. In order to utilize the full potential of this development, capacity building is necessary. Digitalization can also improve education both at schools and universities. For instance, double degrees can be more easily facilitated through the digitalization of documents and syllabi. In order to be successful in digitalized education, it is necessary to have a central planning for the education sector as this will ensure same standards, same learning material and proper implementation. The promotion of collaboration in education and research can help ASEM to have a direct impact on people’s lives, thus becoming more people-centered. This would also support equality by fostering access to education and learning materials to groups like women or people in remote areas, who did not have a chance to participate previously. On the other hand, digitalization means that it becomes more difficult to control information and misinformation might be accessed. This can in return result in the questioning of scientifically proven developments – climate change is a case in point here.

International diplomacy is strongly affected by digitalization. Digital diplomacy allows governments to interact directly with their citizens at home and abroad, but also with other countries. These interactions take place in a public space and portray thus a stark contrast to traditional and quiet diplomacy. States have new means to conduct their foreign policy through the use of social media. This offers a unique opportunity for small states to balance their power deficit. It is fast, easy to use, interactive and cost-effective which can help them to make their voice be heard. State and non-state actors can also use the internet to shape major international debates and act as agenda setters pushing for more global governance and raising awareness for specific topics. However, digitalization makes diplomacy more complicated and challenging. Experts and government representatives have to choose their words even more carefully as many people will interpret and keep a record of what has been written. At the same time, we can observe that leaders use social media like twitter strategically to gain support and provoke others. Especially populist leaders tend to adopt the often direct and aggressive language present in social media. Twiplomacy has thus a much more negative connotation these days. Additionally, messages can be manipulated by hackers and external actors can interfere more easily in domestic affairs. This is related to the broad domain of cyber security which ranges from identity theft and stealing of information to manipulation of digital infrastructure and hybrid warfare aiming explicitly at disrupting an alien society by seeding false information and creating mistrust. Due to the increased access, digitalization impacts global governance and the rules-based order as it allows people to challenge the current order and create confusion on the international level. Since norms of international engagement are no longer followed, confidence-building is required anew and cultural sensitivities have to be upheld. Leaders can also use the internet as a form of distraction. They might set the agenda and get people focused on the international level so that they do not realize real actions. It is, however, important to see both, the current doomsday scenario as well as the original honeymoon period. A balanced view is required to fully utilize the opportunities of direct engagement for public diplomacy, but also face the risk of state control and interferences by alien states. Digital diplomacy will not replace traditional channels as quiet diplomacy will be needed to resolve conflicts, but it is an extension of this and both components fulfill important yet distinct functions. It is thus crucial to understand how online and offline diplomacy interact with each other.

The ‘Regional Programme Political Dialogue Asia’ has been organizing the annual "Asia - Europe Think Tank Dialogue", in close cooperation with the EU-Centre in Singapore, since 1998. The aim of this dialogue is to offer representatives of think tanks from Asia and Europe the opportunity for an exchange of perspectives and ideas on issues of bi-regional and international relations. The dialogue forum also serves for the sharing of information and enhances cooperation among institutes from both continents. In recent years, this Dialogue has developed a strong focus on issues related to the Asia-Europe Meeting in order to support the process, raise awareness and foster discussion among think tanks on ASEM. 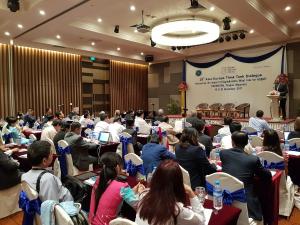