The Konrad Adenauer Foundation, the Lebanese Bar Association, and the Lebanese Foundation for Permanent Civil Peace held their symposium on "International Mechanisms for protecting human rights and their efficiency" on the occasion of the Human Rights Day, which was celebrated on December 10th last Saturday, as commemoration of the adoption of the Universal Declaration of Human Rights on 10 December 1948 by the General Assembly of the United Nations, which was celebrated this year for the 68th time.
December 14, 2016 Ordering Information 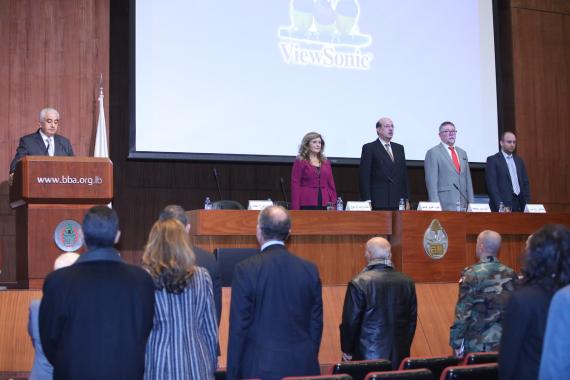 In the first part of the event, the importance of this milestone for the world community was raised by speakers Antonio Hachem, Lebanese Bar Association, Peter Rimmele, resident representative of KAS Lebanon, Rabih Kays as representative of the Lebanese Foundation for Permanent Civil Peace, and Elisabeth Zakhia Syoufi from the Human Rights Institute. Antonio Hachem characterized the way of human rights as complex, first to their adoption in 1948, and the following implications for international law, but also since their adoption. Thus, for a long time a lot of work has still to be done until equality, justice, freedom and peace for all human beings can be ensured.

Peter Rimmele picked up the metaphor of the long and winding road of human rights and urged that December 10 should be conceived as a day of reflection, also with regard to the current situation in Aleppo. In his speech Rabih Kays also turned his attention to what has been achieved so far. The year 2016 is a crucial one for human rights protection in Lebanon, since a National Committee of Human Rights was established. Elisabeth Zakhia Syoufi, the representative of the Human Rights Institutes, also stressed the unsatisfactory situation of human rights and highlighted the role of lawyers in defending human rights. This invitation reached the appropriate audience in the Lebanese Bar Association in front of the approximately 170 people present.

In the second part of the event, further contributions to the mechanisms of human rights protection were made; Dr. Michel Moussa, head of the parliamentary Human Rights Committee, emphasized the role of media and civil society in particular. In the discussion on the abolition of Article 522 of the Lebanese Constitution, which did not regard the rape of a woman as a crime during a subsequent marriage between the offender and the victim, the subject had been raised to a new level, above all by the mixture of political discussion and media reception.

Philippe Lazzarini, the resident representative of the UN program in Lebanon, presented the UN's wide range of activities in Lebanon, including human rights protection, the work with military courts, rights of non-Lebanese citzens and the situation of Syrian refugees in the country. According to Lazzarini, Lebanon is one of the most progressive countries in the Arab world, particularly with regards to education and the right to vote for women. Nevertheless, women are still underrepresented in public representations. With a percentage of about 3% of women in the Lebanese parliament, the number is clearly below the average of approximately 17% in other Arab countries.

Antoine Mersama, from the Lebanese Bar Association, concluded that much remains to be done concerning the equality and freedom of all people. The 21st century was to become a century of the new humanism, but first it is the matter to curb violations of human rights and the fragmentation of the world community done by continuing wars.