On the 18th of November 2016, Konrad Adenauer Foundation (KAS), Maison du Futur (MdF) and Transparency International (TI) conducted a seminar on transparency and accountability. The well attended seminar in Bickfaya, Mount-Lebanon, covered the topic of “Transparency and Accountability” on theoretical and practical levels, drew attention on comparative assessments determining best practices in the context of Lebanon and provided analysis of case studies.
November 24, 2016 Ordering Information 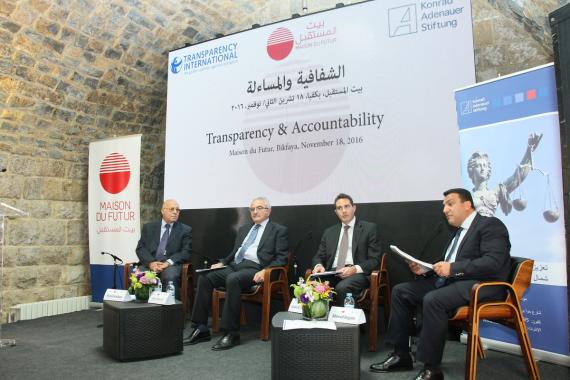 The seminar consists of three sessions, beginning with opening speeches by his Excellency President Amine Gemayel, Hana Nasser (Administrative Director of KAS) and Nada Abdel Sater (Board Member – Transparency International). This was followed by a two hour discussion panel with Khaled Kabani (former Lebanese Minister), Badri El Meouchi (Chairman of the Lebanese Transparency Association), Amer Khayt (Former Secretary General of the Arab Transparency Organization) and the moderator Abboud Bejjani (Regional Vice President MENA Region, AbbVie). The panel discussed the definitions and different forms of corruption, and evaluated the importance of fighting against corruption. The panel also exchanged ideas on how to enable transparency and accountability to flourish and what lawmakers and citizen can do to promote transparency and accountability. The speakers highlighted the need for a law providing the right of access to information to all citizens and a whistleblower protection law. They also underlined the need to reform and empower regulatory and supervisory institutions such as the Central Inspection Commission and the Bureau of Accounts. In regard to the civil service, the speakers concluded that there is a need to look into: accountability modalities, training and capacity building and salaries amendments.

The second session focused on transparency and accountability in Lebanon. Arkan El Siblani, (UNDP Regional Program Manager), Ghassan Moukheiber (MP), Mayssam Noueiri (Director General of Ministry of justice), moderated by Badri El Meouchi, intensively discussed the potential impact of the United Nations Convention Against Corruption (UNCAC) for Lebanon and why transparency and accountability is so weak in Lebanon. Furthermore they drew attention to the questions of how to strengthen transparency and accountability in ministries and other state institutions and how citizens can be encouraged to engage in the fight against corruption. The panelists demonstrated relations between the sectarian system and corruption, and the relations between the sectarian system and the absence of accountability. It was underlined that since 2005 more liberty and freedom of action can be seen. As an example the new civil and political movements were given. According to Ghassan Moukheiber the modalities in Lebanon exist, but they are not effective. Moreover, as Moukheiber stated, it is necessary to make the cost of corruption higher than its benefits and to build coalitions between decision-makers or individuals who are not corrupt – in order to fight corruption.

The last session of the seminar addressed the question of how good governance, transparency and accountability can be strengthened in the power and garbage sectors. Moderated by Sami Haddad (Lebanese minister of Economy and Trade), Ziad Hayek (Head of Privatization Council), Gina Chammas (former auditor of EDL) and Mirvat Al Hoz (Head of Environmental Engineering program, Balamand Univeristy) talked in this technical session about the continuing failure of the electric public utility in covering the country's domestic and industrial needs, and the opaque assignment of the waste management functions to a private contractor.

The seminar was rounded off by a keynote speech, during the lunch session, by Ziad Baroud (former Minister of Interior and Municipalities). Baroud reiterated the necessity to reform libel law, as it is the basis to expose corruption.