After an uncertain nip and tuck race with the VMRO-DPMNE, the Social Democratic Union of Macedonia (SDSM) declared victory at the early parliamentary elections 2020. The SDSM-led electoral alliance "We Can" gained 35,89 per cent of the votes, or 46 seats in the Assembly, while VMRO-DPMNE's electoral alliance "Renewal of Macedonia" attained 34,57 per cent or 44 seats. These results, published by the State Election Commission, are still unofficial.
2020-07-20 urdhërimin e informacionit

On 15 July 2020, parliamentary elections were held in the Republic of North Macedonia. They were the ninth parliamentary elections since the country gained independence in 1991, and the fifth snap parliamentary elections. Election day had originally been scheduled for 12 April 2020 but had been postponed due to the coronavirus pandemic. Fifteen parties and electoral alliances stood for election to the Assembly of the Republic of North Macedonia. The national conservative VMRO-DPMNE led the electoral coalition "Renewal of Macedonia". With the "BESA Movement" participating in the SDSM-led "We Can" coalition, parties of the Albanian and Macedonian ethnic communities were united in an electoral coalition for the first time.

The turnout was at a record low of 51 per cent, which was certainly due to the fear of getting infected with the coronavirus, but also to the citizens' general disappointment with the political parties and their negative campaigning which dominated especially during the second half of the election campaign, and, unfortunately, to the parties' incapability to focus on solutions to the citizens' real problems instead of mutually accusing each other on the level of symbolic policies.

Compared to the 2016 parliamentary elections, VMRO-DPMNE loses 5 seats, which is not only due to the low turnout, but essentially also to the fact that they lost many votes to the small right-wing parties and also to the Left, which gained two seats in the Assembly. Even though the party "The Left" pursues an explicitly leftist ideology and advocates leftist values, it participated in the election campaign with statements that are generally considered nationalist, such as the demand to cancel the Prespa Agreement on the name change and to appeal against the law on bilingualism. The election results show that undecided voters did not recognise VMRO-DPMNE as a new concept or a viable alternative to the ruling SDSM.

Meanwhile, SDSM did not manage to win any seats either, despite its election coalition with BESA, but lost three seats as compared to the 2016 elections instead. Thus, the voters expressed their discontent with the last three years' SDSM-led Government under Prime Minister Zoran Zaev. During his term of office, the country was shaken by serious corruption scandals, first and foremost the "Racket" case, which saw the former Chief Special Prosecutor sentenced to prison for misuse of office. The Special Prosecutor's Office had been regarded as a symbol of justice and the fight against corruption and crime. There is evidence for high SDSM officials being embroiled in the case.  Former SDSM MP and Vice President of the Assembly Frosina Remenski is accused in a criminal case involving fraud and money laundering. Now, the question is whether SDSM, with its present leading figures who were at the head of the institutions, some of whom are implicated in affairs, will really bring about an improvement with regard to the rule of law and the fight against corruption and party patronage.

To the surprise of many observers, the actual winner of the 2020 parliamentary elections is DUI. Their campaign for the first ethnic Albanian prime minister turned out as an excellent PR coup for the largest party of the Albanian community. Thus, DUI once again won the most votes among Albanian voters, notwithstanding speculations on their discontent with the party's long-lasting dominance and forecasts that it might end up in opposition after the elections. During his campaign speeches, SDSM frontrunner Zoran Zaev had often referred to a DUI in opposition, but the election results prove him wrong. The increase from 10 to 15 seats will hardly provide DUI with the office of prime minister, but it is certain to assure them a very good starting position in the negotiations on the formation of a government.

The parties "Alliance for the Albanians" and "Alternative" that ran as an electoral coalition for the first time also scored a great success by winning 12 seats.

The parliamentary elections were conducted in a peaceful eaceful, fair and democratic atmosphere. Small irregularities are not expected to have any noteworthy impact on the final results. However, the fact that the State Election Commission's system crashed leaves a bad taste, since it was therefore impossible for the public to receive information on the turnout and the results in a transparent, timely and credible manner.

In accordance with the Constitution, State President Stevo Pendarovski will mandate the winner of the elections to form a government, i.e. SDSM's president Zoran Zaev. Even though the result was very narrow and VMRO-DPMNE has announced to join the race for a majority, that scenario is very unlikely. What we can expect, though, is a thorough and detailed analysis of VMRO-DPMNE's policies, a search for errors, as well as efforts towards reform.

The most probable scenario is that SDSM and their electoral coalition will form the government together with DUI and maybe DPA, thus achieving a majority of 62 out of 120 seats in the Assembly. The future government will have to face serious challenges, such as the energy-sapping fight against the coronavirus pandemic and the economic crisis it has caused. EU accession negotiations are at the top of the agenda, expected to start this year, during the German presidency of the EU Council. When the accession process begins, North Macedonia will finally have to initiate serious reforms in many areas, including the rule of law, the fight against corruption, and public administration. These reforms are a precondition for full membership in the European Union, a goal that Zoran Zaev wants to achieve within six years, as he promised the citizens in a campaign speech. What the citizens expect from the new government, however, is proper, good and honest governance, which, as such, should lead to positive result in all areas of society. 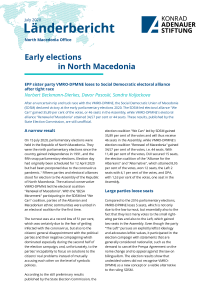