Pakistan: Opportunities and threats to the development of a pluralistic society

von Tina Mercep
The European Office in Brussels had the honor to have the Archbishop of Lahore, Msgr. Sebastian Shaw, as a guest and speaker for a breakfast briefing. He enlightened the audience with a historical background about Christians living in Pakistan and proposed suggestions how the institutions of the European Union could play a more significant role in Pakistan in order to improve the current situation of Pakistani Christians. The Excellency was accompanied by Mark von Riedemann and Marcela Szymanski, two representatives of our partner organization Aid to the Church in Need.
29. Juni 2016 Bestellinformationen

The European Office in Brussels had the honor to have the Archbishop of Lahore, Msgr. Sebastian Shaw, as a guest and speaker for a breakfast briefing. He enlightened the audience with a historical background about Christians living in Pakistan and proposed suggestions how the institutions of the European Union could play a more significant role in Pakistan in order to improve the current situation of Pakistani Christians. The Excellency was accompanied by Mark von Riedemann and Marcela Szymanski, two representatives of our partner organization Aid to the Church in Need.

Muhammed Ali Jinnah, the founder of Pakistan, expressed in his policy speech on 11 August 1947 that to “change the past, the people have to work together in a spirit that everyone, no matter what community he belongs, no matter what is his color, caste or creed, is a first, second and last citizen of the Pakistani State with equal rights, privileges, and obligations”. He promised that the State has nothing to do with the religion, giving hope that Pakistan will become a State of freedom of religion. Unfortunately his promises weren’t held. The first islamization laws were applied in Pakistan in 1971. The Constitution of the Islamic Republic of Pakistan was ratified on 14 August 1973. It determined Islam as its state religion. In 1978 the Blasphemy Laws were in-troduced. These laws are aimed at punishing principally two types of actions, each one with one possible punishment: Offense to their God and his prophet and offense to the Quran.

Consequently, the society was divided and these laws were misused in order to punish Christians as infidels.

The Pakistan Penal Code prohibits blasphemy against any recognized religion, providing penalties ranging from a fine to death. The most condemned persons were mostly followers of non-Muslim religious minorities. The Christians living in Pakistan are exposed to an increased risk towards them. The most recent dramatic event took place on 26 March 2016, on Easter Sunday. In the city of Lahore, a suicide bomber set off a powerful blast close to a children’s swing set in a public park. At least 69 people were killed and around 300 were wounded. A large number of Christian families spent the Easter holiday in the park that day.

On 14 November 2013, Pope Francis ap-pointed Bishop Shaw as Archbishop of Lahore, in the center of Pakistan. It is the capital city of the province of Punjab, the second-largest metropolitan area in Pakistan with a population of 10,052,000 people. It is the 15th-most-populous city in the world.

Pakistan has more than 180 Million inhabitants of which 96 % are Muslims and only 2 % are Catholics. That means 2 million believers are represented by the Archbishop who received his religious training under the Order of Friars Minor and at the Christ the King seminary in Karachi. Before joining the Franciscans he was a teacher.

Christians living in Pakistan are treated in a different way during their everyday life than Muslims. According to the Archbishop the blasphemy law which is misused in the society should be abolished. For many years, there are revolts going on against this law. Under this system, the Christians of Pakistan have neither equal political, socio-economic status, nor the equal access to available opportunities in playing a leading role in the national institutions. The most eminent example can be found in the constitution: Christians are not allowed to become President, Prime Minister, Chairman of the Senate, or the Speaker of National Assembly (Parliament) of Pakistan, only Muslims can be elected. But also on the labour market the discriminations are very obvi-ous: Religious minorities in Pakistan stuck on the lower rung of the economy in Pakistan.

Even if the Christians are still the number one target of the blasphemy law, also the Muslims themselves are suffering under these rules. There is a risk that everybody can be victimized, so these laws need to be abrogated. Till now none of the depute in the national Parliament introduced this proposal for fear of criminal prosecution. Furthermore the President of Pakistan promised to a delegation of minority religious leaders, including the Catholic Church, on 14 April 2015 that they would take measures to prevent the misuse but nothing has been effected so far. However there are little steps of progress: In January 2016 the Human Rights Council was founded which is mandated to act and prevent escalation when accusations of blasphemy appear to go out of hand.

In Pakistan terrorism is becoming a part of Christians’ daily life. Until 1978 Islamic law was largely restricted to personal status issues. Through the current ruling Islamic Laws a separation of the society was predictable. There was a time when Muslims and Christians were friends, says Msgr. Shaw remembering his school times.

After the 09/11 attacks on the World Trade Center, the intervention in Afghanistan began on 7th October 2001. With this decision the future of the Pakistani Christians was embossed: More and more aggressions were confirmed. It exists the clear evidence that there is a religious affiliation regarding to the attacks. One of the crucial reasons for the hate against the Christians is that catholic schools are providing education, not only to boys but also to girls. The Catholic Church runs 350 schools in Pakistan with an average of 1,000 students each. It must be noted that these schools are reputed as the best of the country and that the great majority of the students are Muslim. The lack of comprehension of the benefit of invest-ment in education is the biggest obstacle that Pakistani Christians face against terrorism and the Taliban. Nevertheless the Archbishop of Lahore and his colleagues won’t stop to stand up for more education of young people. Mrs Szymanski from Aid to the Church in Need also affirmed that “the children and their education should be our first priority”. And there is hope: Many Mus-lims cooperate with the Catholic Church for fighting together for a peaceful Pakistan. The people start recognizing that the catholic schools give good education to the Pakistani elite.

The content of Pakistan's official textbooks has often been criticized for promoting religious intolerance: This is a sociological problem that rises from the first grade at school. The sentence “Jewish and Christians cannot be trusted” in the Sociology textbook in 7th grade affects the perception of young Muslims who see their Christian classmates as infidels and this encourages the division of the society. For the Archbishop the European Union can play an important role in providing equal textbooks in Pakistani schools. Regarding this point improvements are necessary and the European institutions are called to be more active and hold promises made in the past. The Catholic Church has reviewed all the books in detail and vis-ited the Minister of Education of Punjab to address this issue, showing exactly where changes should be made in order to pro-mote pluralism. The Minister expressed dismay and promised to make some changes, which so far have not taken place.

Only equal schoolbooks can make a change not only for Christians but provide a safer life for all Pakistanis.

Msgr. Sebastian Shaw accents the im-portance of interfaith dialogue. The inter-faith dialogue doesn’t mean converting but sharing about different faiths, hearing at each other and finding common points. This is an essential tool in order to achieve a balanced society and to educate the people to be more merciful and respect one another. This instrument found consent among Muslim leaders. In June 2016 the first ever session of the Interfaith Dialogue organized and hosted by the Muslim community of Islamabad took place. Several ambassadors from different faiths were invited and it was deemed a great success. The cooperation between the religions can be seen as an example to the society to open their minds and accept the existing diversity in Pakistan. 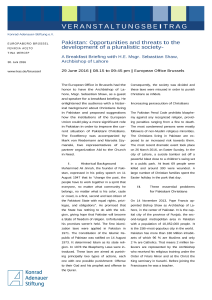