Perspectives for Economic and Trade Policy and International Relations

Lecture delivered by Philipp Mißfelder, MP, Foreign Policy Spokesman of the CDU/CSU Parliamentary Group, at an evening debate organized by the Konrad-Adenauer-Stiftung and the Keizai Koho Center in Tokyo, 2012.
31. Dezember 2012 Bestellinformationen

For some time, access to resources has been one of the important issues in the global discussion of economics and trade. For all countries, supply of affordable raw materials plays a decisive role for their industries. Globalization and growth require deepened economic engagement with the outside world at all levels. To maintain an open global order at many different levels therefore is a prerequisite for safeguarding sustainable

In such an environment the conditions for economic success have grown more complex and all countries develop an increasing set of interests which stem from a wide range of factors. Interests may differ and, of course, depend on a country’s very own and individual situation. However, the need to secure access to natural resources and raw materials, the need to secure energy as well as the need to ensure trade access are considered to be a fundamental common interest – in particular for such highly industrialized countries like Japan and Germany. Economies need predictable and sustainable supply of raw materials. And sustainability, one of the most important principles of market economies, rests on the convergence of economic efficiency, social responsibility and the fair access to resources.

Access to resources is firmly linked to economic and trade policy but also to foreign and security policy. There are many challenges ahead. Growing international competition for important industrial raw materials intensifies in times of upward global growth. Volatility of prices on the commodity markets can be dangerous for the demand and supply sides alike. The sometimes missing transparency in the exploitation of raw materials is increasingly questioned by users, international environmental groups and also by the civil societies in supplier countries. Supply restrictions, if applied, not only prevent a fair access but foster imbalances and

economic distortions as can best be seen from the debates on rare earths. Furthermore, the issue of supply security including enhanced protection of the sea lines of communication is on the agenda of security experts around the world. And finally, the answer to the lingering question whether the 21st century will be marked by clashes over the distribution of resources is still uncertain.

When Philipp Mißfelder visited Japan earlier this year we asked him to deliver a lecture on Access to Resources – Perspectives for Economic and Trade Policy and International Relations. We did so, as this topic is equally important for Japan and Germany. Philipp Mißfelder was destined to take it up. He is the Foreign Policy Spokesman of the CDU/CSU Parliamentary Group and the youngest member of the Christian Democratic Party (CDU) Executive Committee which is the highest policy body of the party. He has visited Japan several times in the last years, has realized the importance of the country and has become a convinced friend of Japan. Philipp Mißfelder is a politician with a clear global vision, well aware of the growing global inter-dependence among nations and conscious that national responsibilities do not stop at the border. He is an important voice within and without the German parliament on both value and interest based German and European foreign and security policies including an open and equitable international trading system.

His speech was delivered in Tokyo as the keynote address of an evening debate which was organized by the Konrad-Adenauer-Stiftung and the Keizai Koho Center. It was received with a wide interest by the audience

so that we decided to publish it within our KAS program on Social and Economic Governance in Asia.

This new program covers at its core market economic challenges in the region, aims at discussing and analyzing economic and social governance issues which are of practical relevance in Asia and takes up issues of global economic policies to deepen the analysis of the dense patchwork of interconnections that crisscrosses the regional and global economy including their economic and policy spillovers between Asia and Europe. 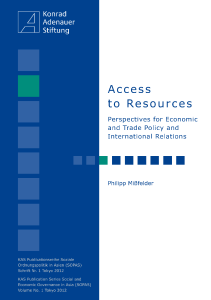