“Everything changes and nothing remains the same”. This truth of Heraclitus is well-known and unquestionable since the ancient time. Another thing that appears to be frustratingly difficult is to predict how exactly this or that will change. No one was brave enough to predict the collapse of empires in the course of the First World War and no one expected the demise of the Soviet Union in 1991 as well. Sometimes scientists try to compare the things with those ones happened in the past on the basis that they seem to be similar to some extent. But what if something is a completely new phenomenon without any historically comparable evidence? This question is a pain in the neck of modern European scientists who set about making predictions about the unprecedented integration group – the European Union. The only possible way is to avoid any imperative statements, not to take any predictions without a pinch of salt, but to present and analytically compare different scenarios even though the likeliness of them to materialize in the future can considerably vary.

The European Union is an established integration group, the original framework for which was laid down in the post-war period with European countries aiming to bring peaceful relations to Europe, unite it and put an end to intra-european hatred and rivalry torn Europe throughout centuries 1. However, the current status of the EU differs a lot from its origins when the famous Treaties of Rome were signed. Within a half of century it evolved from 6 countries aimed at enlarged but still limited economic cooperation to the most developed integration union with shared economic, security and international policies 2. That is why there is in fact much controversy about the future of the European Union, in particular, if one considers its development in middle- and long-term perspective.

Some experts foresee the breakup of the EU and current challenges give considerable force to their arguments: refugee and migration crises and diverse positions of EU-countries towards dealing with it, unexpected “Brexit”, which shattered the unity of the EU and the dramatic rise of far-right and populist aspirations throughout Europe are only the most obvious examples demonstrating the threats that the EU faces today. However, such a radical approach seems to be rather unrealistic as the inflow of migrants seems to have levied, electors in the Netherlands and France voted for continuity and predictability and thus prevented radicals from coming to power. What is more, the possibility of further clashes, so called Nexit and Frexit has been reduced. Only these facts disprove the assumptions that the European Union is likely to fail by 2050.

My personal experience and knowledge, which I gained thanks to the KAS-seminars devoted to the EU, allow me to come to the conclusion that the EU will surely not collapse in the next 30 years. This stance stems from the fact there are more common points than divergence ones.

Firstly, economic cooperation, for which purposes the European Economic Community was originally set up in 1957, will strengthen the Union in the predictable future. The common market which is now underpinned by four fundamental freedoms – freedoms of movements of goods, people, services and the capital over borders 3 - was a great success ever achieved by an integration group. These freedoms create a wide range of opportunities for both the governments and the people to derive economic benefits, especially in the modern globalized world which makes access to foreign market easier and thus increases competition. That is why it is highly in the interest of the member-states to support the existing status quo within the EU.

Secondly, from my perspective, common values will certainly not disappear or get lost as it is predicted on the ground of the inflow of refugees and migrants from Arab countries. Apart from freedom and democracy the core European value is diversity. It is usually applied to physically disadvantaged people, those with a different sexual orientation. Multiculturalism, in this way, is another type diversity, which should be treated with respect by Europeans. I personally share the fear of perceived and sometimes real threats caused by the current immigration flows and reflected in the rise of the terrorist activity, but in fact this is because of the lack of security mechanisms in Europe and resistance mounted by the ISIS in response to advance of the coalition forces. Taking into consideration that modern Europe faces negative natural domestic population growth and that cultural isolationism is certainly not the best way to survive today, the open doors policy, adopted by Germany in the wake of the migration crisis was not a mistake, but the investment into the thriving future.

Finally, from the position of the balance of power, there exists a strong link between the united Europe and peaceful Europe. The history of European countries was marked by the number of bloody wars – the EU managed to transform once conflict-ridden societies into the community, which enjoy a harmonious and rewarding relationship. In this case, every step back in the integration will inevitably foster insecurity and instability in the region. Besides, it is a well-known fact, that the development of the integration processes in Europe was furthered not only because of the wish to increase economic collaboration between countries. It was also motivated by the desire to incorporate Germany into the common European structures and thus to stave off any possibility for it to reestablish its power over Europe as during the first half of the XX century Germany twice broke the status quo causing relations to transmute into a full-fledged war. Nowadays as de-facto the strongest and the most powerful state of the EU, Germany strongly upholds the Union and makes a lot of efforts to preserve stability and intragroup unity. Other countries benefit from this position of Germany, such as France where the fear about German hegemony is still present surprisingly (that is why France is unlikely to leave the EU: taking up the second honorable position in Germany-led Europe is much more better than standing outside the EU with strong Germany as a neighboring country). All this leads to the desirable assumption that having learned the lessons from the past European countries will strive for peace and security and therefore for unity in the future.

These arguments illustrate that economy, values and security lay the groundwork for the future existence and development of the European Union. At the same time much of the contemporary debate revolves about how the EU will evolve. In my view, for good or ill the European Union may be subject to severe transformation in the coming 30 years and some intentions of member-states can distinctively demonstrate it. Thus, shortly after the historic referendum in Great Britain German and French Foreign Ministers prepared a document “A strong Europe in a world of uncertainties”(“Ein starkes Europa in einer unsicheren Welt”) 4 that embraced a broad range of reforms in the EU: from the common European Army to different models of integration distinguishing those who prefer staying on the achieved level or even taking a step back from the supranational level to the national one and those who are willing to modify or deepen the scale of integration. The former initiative would in practice mean the ultimate loss of sovereignty and the latter one would revive the idea of Europe of different speeds. Moreover, officials of the Italian Foreign Office even offered to create a Schengen area for defense 5. Looked at in this light, there is a high possibility that the EU, in particular, its integration mechanisms will transform in the future: a new treaty will be necessary, as well as new voting behavior and modified economic instruments. Furthermore, the EU may become larger as for the number of member-states. For instance, Moldova and Transnistria are likely to join the Union on the same condition as the Northern and Southern Cyprus did.

Another aspect that should be touched upon is what kind of interaction the EU and Russia will enjoy by 2050. One can argue that sanctions imposed by the EU in 2014 have become the most challenging issue in EU-Russian relations today. However, the current modus vivendi is very likely to be changed in the next years, as sanctions have already not only proved to be ineffective as a mechanism of political pressure, but also showed that there is fierce disagreement about this policy among EU-states. Thus, Austria, Greece, Hungary and Slovakia have criticized sanctions against Russia. That is why the EU, whose center of political decision-making seems to be not in Brussels, but in Berlin, will obviously rethink its course in relation to Russia. At the same time, the softening or even the cancellation of sanctions does not necessarily mean that the EU-Russian relations will be brought to a new strategic level. From a viewpoint of realism, further strengthening Russia, restoring its political influence abroad and its transforming into one of centres of modern multipolar world produces a negative impact on the EU in the sense of its weakening. That is why a general assumption would be the continuation of relations based on competition and contest. The European Union will apparently follow its strategy of “selective engagement” adopted by the Union in the Global Strategy for the European Union’s Foreign and Security Policy in 20166. Nevertheless, these relations will become more pragmatic and therefore more productive in the face of common threats such as terrorism and other anti-system elements breeding instability in the region. Even though sometimes the counterparts cannot find a common ground, the need to ensure the acceptable level of relations to be able to predict the actions of the other party will prevail. There will also be talks about the common security system, but by 2050 the problem of “divided security” will not have been resolved and the building of a common security space from Lisbon to Vladivostok will not be seriously advanced.

In conclusion, it is necessary to point out that in 30 years a new era of European fragmentation will not come into existence as centripetal tendencies overweight centrifugal ones. The EU strengthened by common or at the very least overlapping economy and security interests and shared values and principles will command broad support from member-states that will bear in mind lessons from the past and stand in defense of peace and fruitful co-existance. However, some institutional transformations and modifications are deemed unavoidable to comply with the existing reality and meet current and future challenges. This supports the idea that the need of the European unity will remain, but the configuration of relations, their institutional framework will change. Finally, despite contradictions and perceived incompatibility of interests that will remain, there will be a potential for cooperation with Russia motivated by pragmatism and the necessity to withstand the modern threats and guarantee stability of relations and predictability of actions. 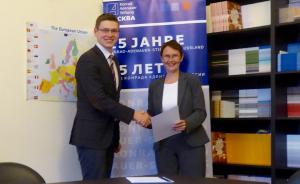