by Carlo Masala
If the EU wants to be more than a mere accessory of one of the new superpowers in today’s international system, and is not only determined to protect itself from the effects of a new political bipolarity, but also to have and develop its own sphere of influence and action in this new world order, then it needs the capabilities, processes, instruments, and mechanisms to make this happen – it needs strategic autonomy.
September 16, 2019 3 Ordering Information

For the last six months, a spectre has been haunting Europe: The spectre of strategic autonomy. Just like talk of a “European army”, the term “strategic autonomy” is shrouded in myth and misunderstanding. This is partly the fault of stakeholders involved. When French President Emmanuel Macron defines the term as the necessity and capacity of the European Union to defend itself against Russia and China, but also potentially the US, this suggests that strategic autonomy is about preparing Europe to play a military role in future disputes. However, when we take a closer look at the military realities of the EU member states, it quickly becomes clear that this cannot be the case. If the EU sought to become a military force with the capability to single-handedly repulse a hypothetical attack on an EU member state by six Russian tank divisions, then we would have to admit that strategic autonomy is a very distant objective. In fact, so distant that current EU policymakers would not even experience it during their lifetime. The capability gaps of European states are too wide to be closed in the short or medium term, so if strategic autonomy is understood in the military sense, we should abandon this idea right now. The inevitable disappointments linked to attempts to achieve this would only damage the idea of European defence integration, and European integration as a whole. Strategic autonomy should, therefore, not be viewed in the context of the debate on increasing the EU’s defence capabilities.

But if the concept of strategic autonomy should not be understood in the military sense, then how do we interpret it? To find an answer, we first need to take a closer look at the international context in which the European Union operates, both now and in the future.

For the European Union, the 21st century is marked by three major trends. The first of these is the erosion of the liberal international order. The institutions, norms, principles, and practices that have largely governed international politics since 1945 are increasingly being called into question or even reduced ad absurdum by the US, and more particularly by Russia and China. Notwithstanding, the vast majority of﻿ EU member states have an interest in ensuring that at least some of these principles, practices, rules, and norms continue to apply, both between themselves and in their relations with the outside world.

Secondly, we find ourselves in a phase where a new bipolarity is emerging. Even today, the structure of the international system is being determined by global competition between China and the US. As far as America is concerned – and there is a consensus between the Republicans and Democrats on this –﻿, China is the country’s number one challenge. And from the Chinese perspective, as made clear at the 19th National Congress of the Communist Party of China, the US is China’s main problem in its rise to becoming a global power. This new bipolarity will look very different to the old one that existed between the US and ­USSR. Although military and strategic nuclear capabilities will still play a part, it will be primarily dominated by technological and economic aspects. For the EU, the question is how it should behave within this new polarity as a community of states, and how it can protect itself from precisely these negative effects.

Thirdly, Europe will only be able to deal with many of the new challenges facing security policy emerging from its southern and eastern neighbours (such as collapsed states, migration, and repercussions of the climate crisis)﻿ if it has recourse to its own economic, military and political capabilities. The US will no longer be a reliable partner.

In light of these challenges, it quickly becomes clear that the main political problem for Europe in the 21st century is the risk of being relegated to the sidelines in international affairs due to a lack of political, economic﻿, and military decision-making power, or else having to choose between the two superpowers in the emerging new world order. Neither of these alternatives is in Europe’s interest. Therefore, the EU must not, in Kant’s words, revert to a “self-imposed immaturity”, as was the case at the end of the Second World War.

However, it is only possible to shape international politics if one possesses the instruments of power and political ability to withstand external pressures. They are mutually dependent: The more power one has, the more effectively one can exert influence and resist external constraints. The European Union’s ultimate goal should be to maintain its capacity to act and to influence global politics in the 21st century, and﻿ to actually enforce it.

This is where strategic autonomy comes to the fore. If the EU wants to be more than a mere accessory of one of the two new superpowers in today´s international system, and is not only determined to protect itself from the effects of this new bipolarity, but also to have and develop its own sphere of influence and action in this new world order, then it needs the capabilities, processes, instruments﻿, and mechanisms to make this happen.

Under these future conditions, strategic autonomy would mean that the EU and its member states must continue to possess and secure the “freedom to develop one’s own society” (to quote Richard Löwenthal), enabling them to live and conduct politics in a way that corresponds to the political and social wishes of the nation states. When transposed to the EU, this “freedom to develop one’s own society” implies safeguarding the continuation of internal self-determination. In a nutshell, this means that the internal and external aspects, organisation﻿, and future of the European Union are determined first and foremost by its member states, taking their national and European interests into account, and not by external pressures. We could say that the concept of strategic autonomy is all about European resilience.

However, this definition does not mean that strategic autonomy results in decoupling from global developments. Indeed, the opposite is the case. A strategically autonomous Europe would be better and more consciously positioned to tackle international developments and external challenges and constraints. This is because its responses would be based on the confidence that they are European responses to these challenges, rather than adaptations to the policies of potential protecting powers or strategic contenders, which are born out of weakness. Consequently, a politically understood concept of strategic autonomy is characterised by a “defensive ambition” (Raymond Aron) to ﻿take part ﻿in shaping international politics in the 21st century.

﻿Europe should not take strategic autonomy to mean autarchy, ﻿as it could isolate the community of states.

To sum up, strategic autonomy is not tantamount to autarchy or decoupling, but rather to creating the ability to better absorb the potential “negative effects” of existing (economic, political﻿, and military) interdependencies with the US and other major powers, while also being in a position to maintain one’s own autonomy of action, even under difficult conditions. With regard to the US, which – even in the 21st century – has been such an important protecting power for Europe, establishing strategic autonomy is a prerequisite for a “balanced partnership” (Werner Link).

Strategic autonomy should, therefore, be primarily understood as a political concept that has to be underpinned by military and economic means. Yet, it also involves the political will for the EU to continue to play or share a leading role in shaping certain areas of international politics (such as world trade and international standards).

Without such strategic autonomy, the EU will, sooner or later, become merely a pawn in the hands of the US and China, and in the long run, it will be marginalised by these two adversaries in the international system. If, however, Europe wants to redeem its own claim to co-determination in the currency of realpolitik over the coming years, it will have no choice but to establish a certain degree of strategic autonomy. Strategic autonomy and the resulting political independence of the EU is also the only way of preserving the remnants of the liberal international order with its values, norms﻿, and rules for how EU member states deal with each other and particularly for how the EU deals with its external, democratic partners (such as Japan, Australia, New Zealand, and South Korea, to name but a few). The alternative would be for the EU to participate in the nascent world of zero-sum games, where the “rules of the jungle” (Robert Kagan) apply. As a multinational union of European states, its internal rules would not allow it to survive in such a world.

In this respect, strategic autonomy is the right model for ensuring the EU remains a powerful and effective player on the global political stage in the 21st century. But we need to make sure that the meaning of the term “strategic autonomy” is communicated more clearly. Its aim should not be a decoupling of transatlantic security, nor excessive armament for defence purposes. Quite simply, it refers to Europe’s political survival and influence going forward. But this requires political will, economic and military capabilities, and appropriate institutional structures.

Dr. Carlo Masala is Professor of International Politics ﻿at the Department of Political Science at the Bundes­wehr University in Munich. 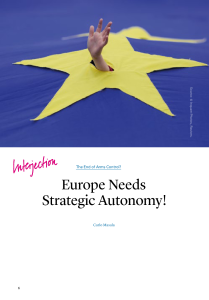 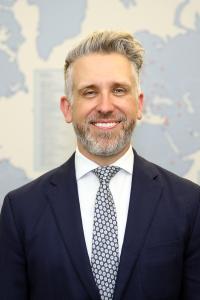