Parliamentary and Governmental Elections in Switzerland

The cooperation between the traditional ruling parties, which have been in power in a grand coalition since the end of the 1950s, has clearly been thrown into crisis. New parties have entered parliament and the political concordance that has existed for decades has started to creak and shift. However, it appears that these changes have not yet found a permanent footing.
March 15, 2012 3 Ordering Information 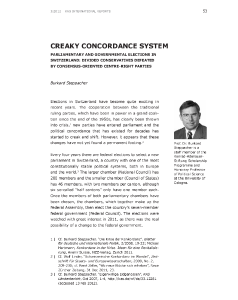