The „Geneva Telegram“ analyses current developments in the multilateral organizations in Ge- neva relative to current events. This time it is devoted to the search for the future Director-Gen- eral of the World Trade Organisation (WTO).
September 23, 2020 Ordering Information

The search for a successor to the WTO Director-General Roberto Azevêdo, who resigned on 31 August, is entering its next round: on 18 September, following consultations with WTO members, the pool of candidates was reduced from eight to five. This interim result came as a surprise to some observers. However, it remains to be seen whether an agreement on a candidate will be reached by the beginning of November as planned. The past few months have clearly shown once more that a Herculean task awaits the future WTO leadership.

In May, the WTO Director-General, Brazilian Roberto Azevêdo, surprisingly announced his resignation, effective as of 31 August, a year before the actual end of his mandate. Officially, he cited personal reasons for his resignation. At the same time, Azevêdo argued that by postponing the important WTO Ministerial Conference scheduled for June 2020 in Kazakhstan until 2021, and the deadlock with important negotiation dossiers in the wake of the COVID 19 crisis, his early departure was opening a window of opportunity for a timely repositioning of the organisation. This assessment was met with only limited understanding in multilateral Geneva, and his move to the Pepsi beverage company immediately after the end of his term of office was frowned upon by some.

As a result, between 8 June and 8 July a total of eight candidates submitted their candidatures to succeed Azevêdo. Although various names had been bandied about, such as the then EU Trade Commissioner Phil Hogan (EPP), there was ultimately no EU representative among them. On the other hand, three candidates from the African continent were nominated straightaway: the Egyptian Hamid Mamdouh, Ngozi Okonjo-Iweala (Nigeria) and Amina Mohamed (Kenya). By 8 September, all eight candidates 1 had been able to present their candidatures to the Member States. An agreement on a successor is expected to be reached by early November.
Consultations with Member States will be conducted by the Chairman of the WTO General Council, David Walker (Ambassador of New Zealand to the WTO), and his counterparts from Iceland (Harald Aspelund) and Honduras (Dacio Castillo).

The aim is to find a successor by consensus. If this isn’t possible, there’s still the possibility of a majority decision. However, this is seen more as a theoretical emergency solution: for open dissent surrounding the election would be a bad omen and would make it considerably more difficult for the new Director-General to work with all members in a spirit of trust.

Status of the candidate race: from eight to five

It had been expected that the three women would remain on the list of candidates. What surprises many observers, however, is that neither Mamdouh nor Seade Kuri made it to the second round. Both were considered firstrate experts. Among one or two longtime observers, one of the two was also considered a possible secret favourite, or at least a possible compromise candidate for the top WTO position. But if political experience is taken as the decisive factor, the choice is less surprising: although both were professionally qualified without any doubt, they were at the same time the only candidates without ministerial experience. The candidacy of the youngest of all the candidates, Tudor Ulianovschi, was considered improbable from the outset, despite his time as Foreign Minister.

The choice may be an indication that Member States consider not just professional excellence, but political clout and experience are even more important. Given the often highly political nature of many of the current challenges facing the WTO, there is a real need for someone who can speak to ministers and heads of states on an equal footing. From an EU perspective, the interim result of the race is satisfactory: of the four candidates proposed by the EU as part of the exploratory talks in recent weeks (Mohamed, Okonjo-Iweala, Myung- hee, Mamdouh), three have made it to the next round.

Chances of the remaining candidates

Against this background, it’s not just for mathematical reasons that the likelihood of a woman being at the head of the WTO in future has increased considerably: Al-Tuwaijri (Saudi Arabia) is seen as an outsider, while Liam Fox (United Kingdom) is considered a controversial candidate by various members – the Brexit hardliner is likely to be met with scepticism, and not just from most EU countries. It would come as a surprise should one of them still be in the race on 6 October, when the field of candidates is reduced to two. In fact, the two African candidates were already considered (slight) frontrunners at the beginning of the race. However, it remains to be seen whether it will end up being a duel between the two. Some Geneva observers are certainly counting on the Korean candidate in the final round.

It will be interesting to see whether the remaining candidates will dare to break cover in the second round with more controversial positions than in the previous hearings.

Search for candidates in a difficult environment

How difficult the climate for discussion is can be seen not least by the failure to appoint one of the four Deputy Directors-General of the WTO as interim head for the period following Azevêdo's resignation. For a long time it was assumed that it would come down to the German Karl Brauner: there is basically an unwritten rule that neither the American nor the Chinese representative would be proposed. The US government is thwarting this expectation by nominating the (professionally very well-respected) US Deputy Director General Alan Wolff. As expected, China, among others, blocked this solution. Consequently, the WTO has been without a Director-General since the 1st of September. WTO officials are making assurances that this has had little impact in practice. Nevertheless, it is an indicator of the extremely difficult negotiating climate and further visible evidence of the stalemate situation in the organisation.

Little or no progress has been made in the discussion of important negotiation dossiers. Although working groups are taking place again (in various forms), some Member States insist nevertheless that they should only discuss and not decide. As a result, many dossiers are not progressing. Even though discussions on fisheries subsidies have been picking up to some extent, many WTO members, particularly India and the ACP Group have expressed doubt whether the negotiations can be finished by the end of this year.

The fact that another pillar of the organisation, the settlement of trade disputes, still remains an area needing improvement was again recalled in an impressive manner last week: the statement by the WTO Dispute Settlement Body that hundreds of billions of US dollars in tariffs imposed on China constituted a violation of the General Agreement on Tariffs and Trade (GATT) was immediately rejected by US Trade Representative Robert Lighthizer. However, since December last year there is no longer a body to which an appeal could be filed, after the US blocked the subsequent appointment of members of the WTO Appellate Body for years.

The last few months have made it all the more clear how important it is to reach an agreement on a new WTO Director-General by the expected deadline (early November):

In view of the economic consequences of the COVID crisis, which can scarcely be estimated precisely but are definitely serious, the continuing protectionist tendencies of many countries and the intensification of trade disputes between large trading blocs, a strong, effective WTO is needed more than ever.

The Ministerial Conference, postponed to June 2021, provides important momentum to advance at least some dossiers, including fisheries, e-commerce, agriculture and trade facilitation. However, the longer the recruitment process takes, the less time is available for adequate preparation for these meetings.

In addition, there is a growing urgency for reform of the WTO – some of the criticisms made by the US are certainly justified – and in particular for a solution to a new dispute settlement system. In short, the new WTO leadership faces a Herculean task.

But whether an agreement will actually be reached in early November is an open question: the past weeks and months have shown that a willingness to compromise is a limited resource among some WTO members. 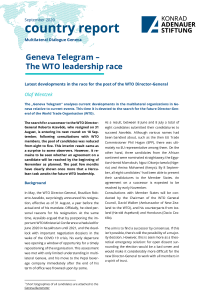