The Swiss Christian Democrats of the CVP vote for change. At their Assembly of Delegates on 28 November (conducted in a decentralised fashion), the party took two historic decisions. Firstly, the delegates confirmed by a clear majority the vote of the party members in the October ballot and voted in favour of changing the party’s name to “Die Mitte – Freiheit, Solidarität und Verantwortung” (“The Centre – Freedom, Solidarity and Responsibility”). This cleared the way for the merger of the CVP with the smaller moderate party BDP. The merger will thus come into force on the 1st of January 2021.
December 1, 2020 Ordering Information

The discussion about the reference to Christianity in the party name is nothing new, but has occupied the party on a regular basis since the 1970s. The Christian Democratic People’s Party (CVP) has long been deeply rooted in the traditional Catholic cantons of Switzerland and in the Catholic-conservative milieu.  Driven not least by secularization and the resulting continuous shrinking of its own potential voters, the CVP has tried for decades to win voters beyond this Catholic milieu and the “home countries” by a wide variety of means. The success of these efforts was limited, however, and the party, with few exceptions, continues to have a difficult time with Protestants and even more so with the growing group of non-denominational voters. As a result, the proportion of voters fell slowly but steadily from over 23% in the 1980s to below 12% in the 2015 and 2019 elections. The CVP was indeed able to successfully limit the damage in the parliamentary elections a year ago. However, it wasn’t able to reverse the trend either. As well: due to the strong gains of the Greens, the CVP even found itself in only fifth place. This ranking may well have consequences in Switzerland, because the seven seats in the Federal Council, the Swiss executive, are usually distributed among the four largest parties according to the formula 2:2:2:1. Although the CVP’s seat in the Federal Council wasn’t acutely endangered this time, it could be seriously threatened if the electoral trends observed in recent years continue. Accordingly, a reversal of the trend has become increasingly urgent and gave new impetus to the discussion about a name change.

However, the most serious – though not the only – reason for the name change was the prospect of a merger with the moderate small party BDP (Bourgeois Democratic Party, which for its part crashed from 4.1% to 2.5% in the parliamentary elections). This is a natural partner in terms of content and is much better anchored in some traditionally (rather) reformed cantons (above all Bern, Glarus, in parts of Aargau, in the Protestant areas of Graubünden, and to a lesser extent Zurich), where the CVP has been struggling. Moreover, both parties (together with members of the Protestant People’s Party) already form a joint parliamentary group at national level. However, as a prerequisite for a merger, the BDP demands that the “C” in the party name be removed. On the 4th of September, the party presidium of CVP Switzerland announced a recommendation to change its name to “Die Mitte. Freiheit, Solidarität, Verantwortung” (“The Centre –  Freedom, Solidarity, Responsibility”).  A survey conducted by the opinion research institute gfs.Bern had shown that renouncing the C could increase potential votes by up to 20%. The new name, “Die Mitte”, went down well with party members, but the reaction of potential new voters in the survey was rather lukewarm.

While the party leadership used pragmatic arguments in favour of the name change, prominent CVP representatives, above all the influential Council of States member Beat Rieder (Wallis/Valais), had spoken out against giving up the Christian reference in the party name. 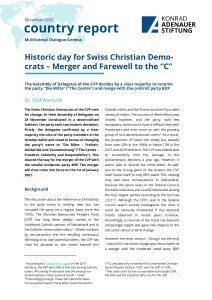