Images from Bosnia: Why is there no improvement? - International Reports

by Sven Petke, Dr. La Toya Waha
Images from Bosnia point to the detrimental situation of migrants. In the midst of winter, some do not live in fortified camps or shelters, but in improvised tents in the forests near the Croatian border – an EU external border. The closure of the Lipa tent camp by the International Organization for Migration (IOM) due to the camp's insufficient standards has raised questions. After all, in the past three years the European Union has invested more than 88 million euro in improving the migrants’ conditions. Individual EU states, such as Germany, have also supported the authorities in Bosnia and Herzegovina (BiH) and important international aid organizations, such as the IOM, are active in the country. Nevertheless, the problem does not seem to have been resolved, and the migrants’ situation not to have improved. Why?
February 4, 2021 Ordering Information

What is the situation?

While Bosnia and Herzegovina (BiH) is itself a country from which many citizens emigrate, in recent years the situation has changed. More and more migrants are reaching the small state that has a direct border with the EU. In 2018 alone 23,902 people were registered, in 2019 it were 29,302 already.   While the quantity of migrants arriving in BiH decreased significantly in 2020 due to the effects of the corona pandemic, the UNHCR nevertheless assumes that still about 16,150 migrants have arrived in the past year.   In addition to that, a significant number of individuals not included in the official figures has to be taken into account.

A majority of the migrants and refugees are nationals of countries like Pakistan, Afghanistan, Iraq and Bangladesh. A particularly large share of migrants is coming from the South Asian state of Pakistan, so that by the end of 2019, Pakistani nationals made up one third of those registered.

Yet, despite this significant quantity of people, fortified camps or facilities are rarely found. Instead, some migrants live in empty buildings, ruins, in the forest or on the streets. With the onset of winter, their situation has become detrimental, and frequently, even has become a serious threat to their very lives.

The Una-Sana Canton bordering the EU member state of Croatia was and is particularly affected by these developments. This Canton’s seat of government is Bihać, near which the Lipa camp was located. While the distance from here to the country's capital, Sarajevo, measures more than 300 kilometres, to Croatia’s border it is less than 20. And this is not a coincidence.

The international community’s financial support aimed at improving the situation has been considerable. The European Union alone has spent over 88 million euro since 2018.  The funds were intended for the improvement of accommodation, and the provision of food and medical care. The IOM’s duty included supporting the coordination of aid, the management and creation of preconditions for migrants’ accommodation in Bosnia and Herzegovina.

In addition to IOM, also UNICEF, UNHCR, and other partners were involved in aiding migrants in the country.

In addition, Germany engaged with further, direct support. In 2020, the Federal Republic of Germany provided over one million euro for the restoration of the properties in the Blažuj center near Sarajevo through the Federal Agency for Technical Relief (Technisches Hilfswerk - THW) and is planning to spend additional funds, this time for Lipa.

Despite all of these efforts, however, there seems to be no improvement.

Why has the migrants’ situation after all not improved?

The destination of the migrants arriving in Bosnia and Herzegovina is the European Union. Like in previous years, those currently in the country do not want to stay in BiH, but seek to re-enter the EU to move to France and Germany.

From BiH perspective, the European Union is responsible. Despite long negotiations, the BiH government did not conclude the status agreement with the European Border and Coast Guard Agency (Frontex) – due to Bosnian-Serb politician Milorad Dodik’s refusal.

Dodik, member of the presidency and chairman of the SNSD, said on the TV channel N1 on 20 August 2020: “Our policy towards migrants is well known and there is nothing new about it. We try to find out, mainly through reports from citizens, where the migrants are and which routes they are taking and we do not want them to move freely through the RS , pressure the population and behave in a predatory manner. We collect them and bring them to one location and then we organize transport for them to wherever they want. They go to the Una-Sana Canton, some go to Sarajevo, others to Tuzla, and we are actually doing them a favour. We offer them transport options so that they do not stay in the RS. We have had a great response from the population and we will continue to do things this way.“

Thus, one major reason for the lacking improvement of the migrants’ situation is the lack of political will to find more permanent solutions. The lack of will derives from the perception that migrants are not Bosnia and Herzegovina’s, but the European Union’s problem – just as the migrants who live in the forests do not want to stay in BiH, but aim to cross the Croatian border to travel to the EU.

This understanding of the problem results in little political motivation and lacking willingness to convert the temporary camps into permanent accommodation for migrants. The IOM, which was responsible for supporting the local authorities in organizing the camp in Lipa, sees in this lacking willingness a major reason for the camp’s closure. The IOM Chief of Mission is quoted: “This camp was built earlier this year in response to over-crowding and unsuitable conditions elsewhere […] For several reasons, mostly political, it never got connected to the main water or electricity supply, and was never winterized. And now, with this fire, it never will be.”

Many in BiH see the migrants’ challenging situation during the winter as a seasonal problem that will be solved in spring and summer anyway "on its own". In summer, it is assumed, the migrants can handle the rather improvised tents until they succeed in crossing the border to Croatia. During the winter, however, the problems currently found in the press headlines pile up.

The populations’ and the state agents’ readiness to prevent people from re-crossing the border to the EU and to instead take care of them in BiH in the medium run is therefore very weak. This weak political will in BiH meets the strong will of the migrants to reach the EU. Combined with the inadequate equipment of the border police and the immigration authorities, this imbalance makes it possible for migrants to frequently cross borders into the EU.

The migrants’ will may be better understood if one looks at their backgrounds. By the time they reach Bosnia and Herzegovina, the migrants have already travelled long distances, many coming from far-away countries such as Pakistan or Bangladesh. They want to re-enter the European Union and are about to reach the border that separates them from their destination. Despite the poor conditions in BiH, many migrants therefore refuse to move to other, more distant, camps. And despite the well-known bad conditions, more and more migrants come to BiH, to the Una-Sana Canton – to the Croatian border.

Numerous migrants who set out from countries like Pakistan and Bangladesh do not flee war or displacement – however, religious (non-Sunni) minorities in Pakistan are repeatedly victims of systematic oppression and violence, and increasingly secularists fall victim to targeted assassinations in Bangladesh. They leave their homeland and their families due to fragile or failing statehood and the poor prospects which result from it. In Pakistan, the political power structures are firmly established. Little has changed, especially because the military maintains its central positions in the state despite changing civil governments. Bangladesh, the most densely populated country in the world, is leaving the circle of the “Least Developed Countries”.  However, the hopes of economic development are clouded by political and social changes. In particular, the Islamization  of state and society by state and non-state actors for many puts into question whether they can have a future in Bangladesh. For decades, thousands of Bangladeshis have been leaving the country with the hope of better prospects. In the past, many of them moved to the democratic neighbouring state of India; but even there, mass migration has led to political changes – and the tightening of immigration regulations and border control.

Even if they wanted to, many migrants from these countries could not stay in BiH. The political pressure on the government is building-up here as well. Despite the references to the EU's responsibility in this issue, the Bosnian government is aware that its own action is required as well. Efforts were increased to identify the migrants and to return them to their countries of origin. In line with these efforts, a mutual Readmission Agreement was concluded during a state visit to Pakistan by Šefik Džaferović and a high-level delegation in November 2020. The agreement, which was signed in Islamabad by the Pakistani Interior Minister and the Bosnian Security Minister, contains the mutual obligation to readmit citizens illegally residing in the respective other state. Accordingly, Pakistani citizens currently illegally staying in BiH can now be returned to Pakistan in a regulated manner – via the international airports in Sarajevo and Islamabad.

While little has been done in this regard yet, due to the administration’s current lack of needed prerequisites and skills, the very fact that there is such an agreement, does not add to the migrants’ incentives to register in camps, to get identified by the state.

Sven Petke is Director of the KAS Office in Bosnia-Herzegovina in Sarajevo since February 2019.

​​​​​​​Dr. La Toya Waha is responsible for the themes of migration and flight in the KAS Analysis and Consulting Department in Berlin. Prior, she was Deputy Director of the Regional Programme Political Dialogue Asia based in Singapore. She is an alumni of the Konrad Adenauer Foundation. 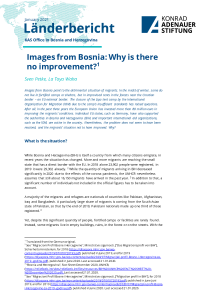 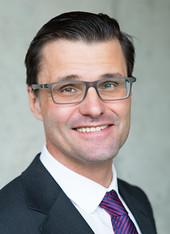