A serious way of designing the future or a new deception?

The covid-19 pandemic has hit Panama hard. By the end of 2020, it was the country in the world with the highest daily number of new infections relative to its population. The complete lockdown, reimplemented since Christmas, this time provoked protests from the urban poor. The tense economic and social situation motivated the center-left government of President Laurentino Nito Cortizo to initiate a comprehensive national development program aimed at effectively counteracting Panama's severe inequality. Therefore, the creation and implementation of the "Bicentennial Pact" program should not be implemented by the government alone. Rather, all political, economic and social forces, down to every citizen, are called upon to contribute.
February 1, 2021 Ordering Information

As early as October of last year, the Panamanian government announced its intention to launch a comprehensive national reform and reconstruction plan. In the weeks that followed, members of the government met with representatives of all political parties, businesses, professional associations and organized civil society to convince them to join forces across party lines and particular interests. Then, on November 26, 2020, President Cortizo officially announced the beginning of the process to create the Bicentennial Pact.
​​​​​​​
By the end of November 2021, the Pact should be filled with content and completed as a program of action in terms of content. The historical background of the Pacto Bicentenario is the bicentennial of the independence of the present-day states of Colombia, Venezuela, Ecuador and Panama, as well as parts of Peru and Guyana, from the colonial power Spain in 1819/1821, which at that time had united to form Gran Colombia (Republic of Colombia) under President Simón Bolívar.
...

Read the report as pdf. 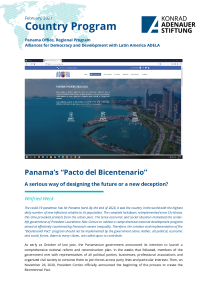 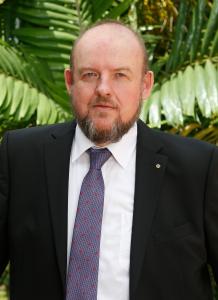 winfried.weck@kas.de +507 387 4470
Country Reports
mi chiel/CC BY-SA 2.0
Panama's government under pressure
Navigating between transparency and accusations of corruption in the fight against the virus
May 20, 2020
Mehr lesen