More than two-thirds of media user say that public service media are important for a democratic society. In the same time, almost 65 percent see the public broadcasters under political influence. These are the results of a current opinion poll in ten countries which are covered by the Media Programme South East Europe of the Konrad-Adenauer-Stiftung in Sofia.
October 31, 2019 Ordering Information

Public service media are also in South East Europe an important part of the media landscape. Their existence is enshrined in the law of all countries and their mandate is to serve the whole society by informing, educating, consulting and entertaining. They are not allowed to support unilaterally a single party, organisation or any other type of group. However, in reality the picture often differs. Public service media have repeatedly been criticised of being the mouthpiece of the government. Thus, this year on several occasions protests occurred against political interference in reporting and structures of the media. In spring public broadcasters in Serbia, Montenegro and Croatia were criticised, in the fall protests against the management of the Bulgarian National Radio followed (see country reports “Public Service Media Under Crossfire by Protest Movements” [March 2019] and “Independence of the Bulgarian National Radio (BNR) in danger?” [September 2019]).

The Media Programme South East Europe of the Konrad-Adenauer-Stiftung (KAS) has taken a closer look at the current situation and developments of public service media in South East Europe the last couple of months. In a current representative opinion poll, over 10 000 people from all ten countries, which are covered by the Media Programme, were interviewed. How important do people find public service media for democracy? How much do they trust them? How should they be financed and what content shall be broadcast? And are PSM considered politically independent?

In the full version of the report you’ll find the summarised results for the entire region and some special findings for the individual countries. It can be downloaded as a PDF file. 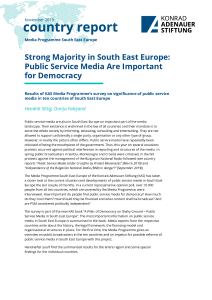