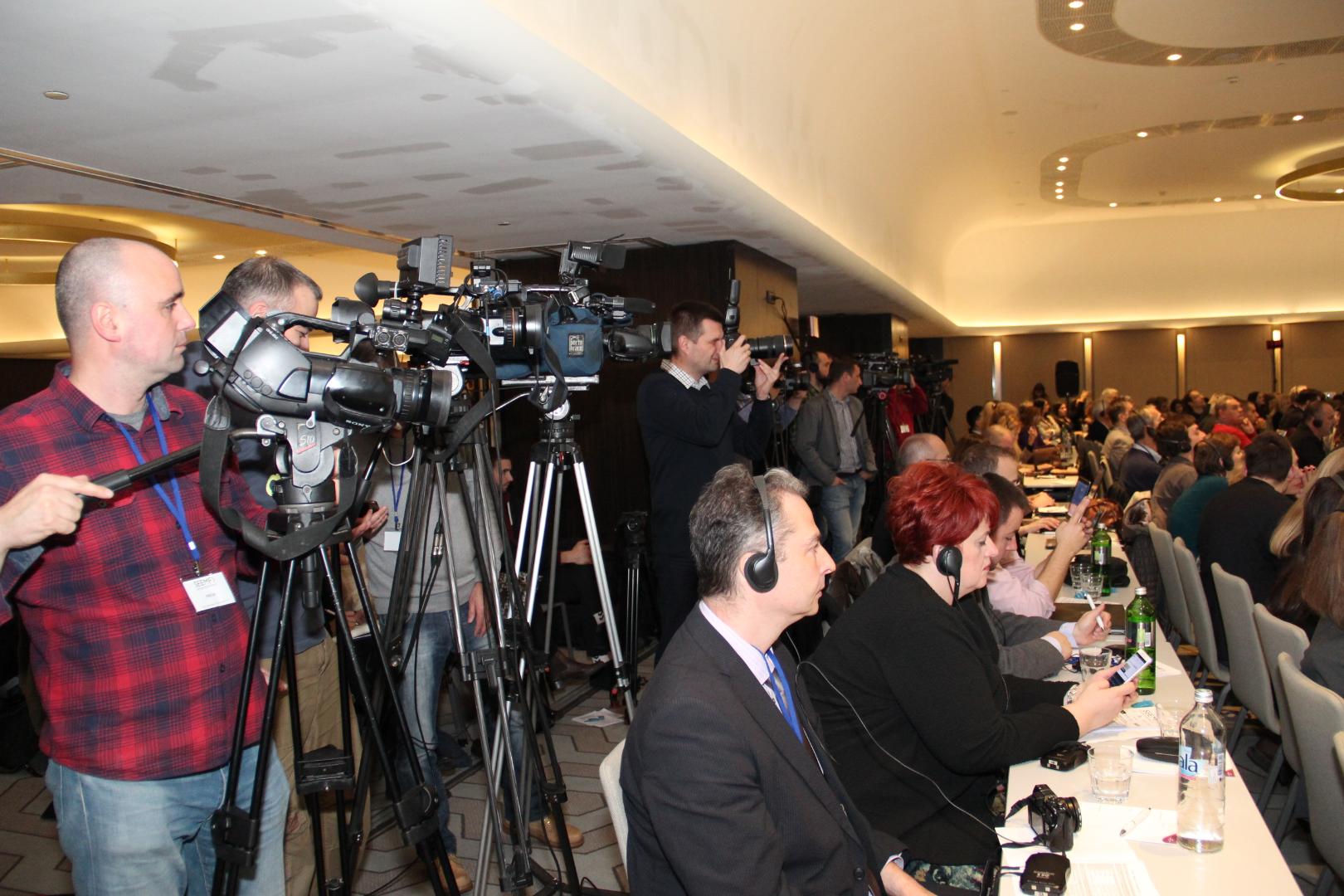 Serbia’s European course is no longer a matter of internal debate – all major political factions have committed to the project. Since Serbia was officially introduced as a candidate for EU membership in March 2012, the country’s task to implement the necessary and already initiated reforms in one of the key areas – media freedom – seems ever more urgent. Not outright attacks against journalists but lingering soft censorship is the most pressing obstacle for media freedom in the Balkan country.

Serbia’s position in the worldwide press freedom ranking of NGO Reporters Without Borders (RWB) has dropped significantly in recent years, from 66th out of 180 countries in 2017 to place 93rd in 2021 (same ranking as the year before). This is the biggest setback out of all countries in the region in recent years. Now, only the press freedom of Bulgaria (112th) and Montenegro (104th) is rated even poorer by RWB. In its 2019 report, Freedom House – another press freedom watchdog organisation – downgraded Serbia’s media landscape status from “free” to “partly free”, for the first time in over a decade. Freedom House cites “election irregularities, legal harassment and smear campaigns against independent journalists, and President Aleksandar Vucic’s de facto accumulation of extra constitutional powers” as reasons for the country’s rating decline. As of 2021 Serbia is still in the group of “partly free” countries according to the Freedom House.

These concerns are mostly unrelated to the legal framework for freedom of speech and press. Serbia’s constitution and specific laws protect media freedom to a satisfactory extent and are in line with European and international standards. Persistent problems rather relate to the concrete implementation of the laws, the courts’ handling of media cases, or, to a lesser extent, to conflicting laws. The Capital City Law is, for instance, directly at odds with the Public Information Law, as it allows the city of Belgrade to own media outlets, whereas the latter forbids this. As for the courts, the IREX Media Sustainability Report 2019 paints a bleak picture of a judiciary system succumbing to strong political pressure and influence. The majority of journalists do not feel adequately protected by the existing legal framework, as it is enforced by judges who frequently, willingly or unwillingly, misinterpret laws protecting free expression in favour of a higher national interest, driving journalists into a practice of self-censorship of sensitive topics. Additionally, authorities tend to treat certain media outlets noticeably differently than others. “Government officials or editors sometimes prevent journalists from reporting on certain topics, such as the talks with Kosovo, crime, economic development issues, environmental disasters, corruption, and improper pressure on the courts”, the IREX reports. “Public officials in Serbia play favourites with the media. While all might be welcome at a press conference, only journalists from favoured outlets will be permitted to ask questions.” The report also sets out that the public authorities tend to refuse requests from media outlets they accuse of “being one-sided”.

Although journalists can no longer be sentenced to imprisonment for libel, “libel lawsuits have become commonplace”, according to IREX. The words and actions of courts and politicians often are not aligned with European press law standards, discouraging critical reporting of political and business interests.

The Serbian law on access to public information is very strong in theory, reaching position three in an international ranking measuring the quality of legal provisions for information access in 95 countries. There are, however, deficiencies in the application of the law: Authorities many a time refuse requests for information not only coming from journalists but also from normal citizens.  “Independent media are regularly denied access to public information”, the IREX reports.

The European Commission report on Serbia highlights that the country adopted a new media strategy in January 2020. Its goal is to identify the main challenges related to media freedom on a domestic level. It is still concerning that the implementation of the strategy has not started and therefore, there is no progress made. The new media strategy describes cases of threats, intimidation and/or violence as a serious concern regarding the freedom of expression. Furthermore, the transparency of media ownership as well as of the allocation of public funds is also to be established.

Number of attacks against journalists on the rise

One of the biggest challenges, also related to a failure of the legal framework to protect vulnerable journalists, is the practice of physical attacks and threats against media representatives, especially those investigating sensitive issues. The problem lies in the way authorities respond to such instances, namely with relative ignorance. The 2019 IREX report describes how investigative reporters are tried to be muzzled: “Physical attacks on Serbian journalists are not uncommon, and the authorities’ response is slow and half-hearted. By contrast, threats against politicians tend to be solved speedily.”  RWB adds that “Serbia has become a country where it is often dangerous to be a journalist” and “most investigations into attacks on media personnel have been stalled or shelved”. Recently, the number of reported verbal and physical attacks against journalists has risen significantly, according to the Annual Report by the Platform to Promote the Protection of Journalism and Safety of Journalists belonging to the Council of Europe.

As of 2020, the cases of threats and/or violence against journalists is still an issue. In this regard, the EC recommends strengthening the freedom of expression and recognises the efforts of the Ombudsman who signed an agreement with seven media associations as well as three journalists’ trade unions on 22nd May 2020. This agreement is laying the basis of the establishment of a platform where cases of pressures on editors and journalists to be reported.

Another concerning issue in this field is the arrest of a journalist for writing an article describing the lack of COVID-19 protective equipment in a hospital. This is following the adopted decree on 28 March 2020 according to which all information on the pandemic is centralized exclusively through the government crisis team. This decree was, however, withdrawn on 2nd April 2020. The acquittals against the arrested journalist were dropped a month later but he remained a victim of verbal abuse and threats (including by high-level officials).

Although the failure to apply the legal standards for media freedom in the country is clearly a problem, the biggest threat in the eyes of many observers is the subtle "soft censorship" prevalent in the highly politicised Serbian media environment. These subtle mechanisms refer to political interference with the Serbian media market which comes in many forms. For example, the media landscape is divided into pro-Government and oppositional outlets. “Pro-government media ignore opposing viewpoints or marginalize news about citizen protests or actions as well as opposition activities”, IREX finds. Additionally, the highly concentrated media ownership structures influence the selection of topics and reporting style of many media outlets. “The state and ruling party exercise influence over private media in part through advertising contracts and other indirect subsidies”, Freedom House states. “While many outlets take a progovernment line or avoid criticism of the leadership, some continue to produce independent coverage.” As a result, media pluralism and investigative journalism are in acute danger.

Media freedom in Serbia thus critically depends on the political will to limit this subtle and soft type of censorship. The official media strategy has not fully been released so far and media experts can only hope that further advancements of Serbia’s European aspirations can give the long awaited impetus for pushing media freedom on the country’s agenda.

In 2020, the political and economic influence on the media in Serbia remains a concern. The new media strategy highlighted the lack of transparency in ownership structure and lack of fairness in financing. It also showed the lack of appropriate criteria or mechanisms in order to reach media pluralism in the country. The strategy also identifies some of the necessary measures that need to be taken in order to address these issues.

Furthermore, the COVID-19 crisis worsened the economic situation of the media sector - mostly due to reduction of the advertising revenues.  In this sense, the European Commission’s report for 2020 is concerned about the prevailing government policy representation in most media outlets leaving alternative views with limited outreach.