On the Eve of 2021: Iran Prepares for New Administrations in Washington and Tehran

The INSS Iran Program, in cooperation with Konard Adenauer Stiftung Israel, invites you to its Annual Conference.

in partnership with the Israel Democracy Insitute

Rising Temperatures, Rising Tension: Climate Change and the Future of the Middle East

Great Power Competition in the Mediterranean

The Konrad-Adenauer-Stiftung Israel and the Maritime Policy & Strategy Research Center, University of Haifa cordially invite you to attend a Zoom panel with 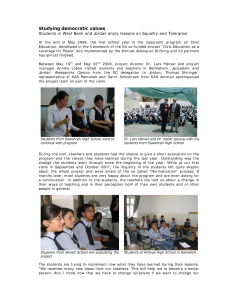 At the end of May 2008, the first school year in the classroom program on Civic Education, developed in the framework of the EU co-funded project "Civic Education as a Leverage for Peace" and implemented by the Konrad-Adenauer-Stiftung and its partners, has almost finished. Between May 19th and May 22nd, 2008, project director Dr. Lars Hänsel and project manager Annika Lübke visited students and teachers in Bethlehem, Jerusalem and Jordan. Alessandro Campo from the EC delegation to Jordan, Thomas Birringer, representative of KAS Ramallah, and Gerrit Schlomach from KAS Amman accompanied the project team on part of the visits. 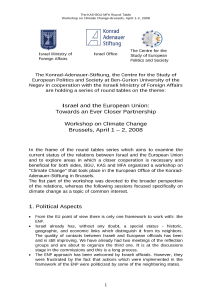 In the framework of its series of round table workshops on the future of the relations between Israel and the EU, KAS together with its partners, the Centre for the Study of European Politics and Society at Ben-Gurion University and the Israeli Ministry of Foreign Affairs, organized a working group meeting of leading scientists and officials from Israel and EU on the shared challenges posed by climate change. In the above pdf-file we are documenting the workshop's proceedings and recommendations. The recommendations of this forum will be submitted to the EU-Israel reflection group. 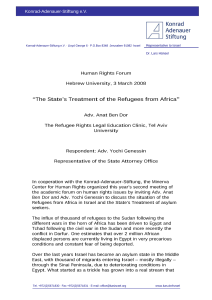 In cooperation with the Konrad-Adenauer-Stiftung, the Minerva Center for Human Rights organized this year’s second meeting of the academic forum on human rights issues by inviting Adv. Anat Ben Dor and Adv. Yochi Genessin to discuss the situation of the Refugees from Africa in Israel and the State’s Treatment of asylum seekers. See the above pdf file for a detailed report by Catherine Hirschwitz.

The annual conference of the “Eshet Chayil” project (in Hebrew: Successful Women) took place at Beit Dany in Tel Aviv on March 16, 2008. More than 300 immigrant women representing Caucasian and Bukharian communities from all over Israel attended the event which was organized by the Israel Women’s Network in cooperation with the Konrad-Adenauer-Stiftung.

Exchange of Experience between chairpersons of Knesset and Bundestag

Program in Germany for Israeli politicians

On invitation of the Konrad-Adenauer-Stiftung a delegation of chairpersons of Knesset committees visited Germany from January, 13-20, 2008. The delegation was headed by Menachem Ben Sasson of the Kadima Party, who chairs the Committee for Constitution, Law, and Justice. The delegation was composed of members of Kadima (David Tal) and of the coalition partners Gil (Itshac Galantee) and Israel Beteinu (Sofa Landver). Moreover, for the first time a member of the ultra-orthodox Shas party, Amnon Cohen, joined a KAS delegation. Cohen is the Deputy Speaker of the Knesset. The trip aimed at supporting dialogue between the German and the Israeli Parliament, establishing personal contacts between parliamentarians, especially between chairpersons of committees. Thus, the goal was to provide a platform for the exchange of experience concerning the proceedings in the respective Parliaments.

One year ago Arab intellectuals and members of several NGOs in Israel met and published a number of documents under the title of "The Future Vision of Palestinian-Arabs in Israel". The documents present a completely new position of Israeli Arabs vis-à-vis the State of Israel. The phrasing aims no longer at the submissive integration into Israel’s Jewish society hoping for equal treatment in return. On the contrary, it challenges the Jewish character of the State of Israel demanding the acknowledgement of the Arab minority as an autonomous entity with a particular culture and separate laws. These documents received divided attention. First, they were discussed in public, before – intentionally or not – public interest faded away. However, KAS and its Konrad Adenauer Program for Jewish-Arab Cooperation understood this as a watershed event in the history of the Arab citizens of Israel and possibly for the character of the state. Therefore, we decided to closely follow the repercussions of these documents on a continuing basis.

A Landmark for Freedom and Justice

Hardly any other case tried in an Israeli court has had as far-reaching implications as the 1961 Eichmann trial. This was emphasized during a symposium organized by KAS Jerusalem and its partner, the Minerva Center for Human Rights. International experts and approximately 200 participants discussed how the trial influenced the development of both international criminal law and socio-psychological identities in Israel and the world. The symposium was held to honor Gabriel Bach, the deputy prosecutor in the Eichmann trial, who celebrated his 80th Birthday. Justice Bach has been a close partner of KAS Jerusalem for many years.

Towards an ever closer Partnership

The Konrad-Adenauer-Stiftung, the Centre for the Study of European Politics and Society at Ben-Gurion University of the Negev in cooperation with the Israeli Ministry of Foreign Affairs are holding a series of round tables which aim to come up with new ways and models for an ever-closer partnership between Israel and the EU under the European Neighbourhood Policy (ENP). It includes five two-day workshops which focus on the issues of: climate change; higher education; economic relations and industrial cooperation; approximation of legislation, norms and standards and immigration.The first workshop in this series of round tables focused on the subject of economic relations and industrial cooperation. It brought together a group of experts in specific economic fields who reflected together on the next steps in strengthening the Israeli-European relations. The recommendations and policy-oriented papers of this forum will be submitted to the EU-Israel reflection group and thus will contribute to the formal process of further economic integration between the parties.

Looking beyond the Paris Donors’ Conference

Prior to the donors' conference in Paris a joint team of Israeli and Palestinian business experts met at the invitation of KAS Jerusalem and its partner IPCRI on Dec. 11, 2008 to analyze and discuss the "Palestinian Reform Development Plan" (PRDP) which was presented to the donor community. A central issue was the question how this positive plan is actually feasable and where to set priorities.

Successful Beginning of the Classroom Program on Civic Education in Jordan

Since the beginning of the new school year 2007/2008, five Jordanian schools from Hesban, Amman and Zarqa are applying the Classroom Program on Civic Education, developed in the framework of the EU co-funded project "Utilizing Middle Eastern Civic Education as a Leverage for Peace" which is implemented by the Konrad-Adenauer-Stiftung in Jerusalem together with its partners in Israel, the Palestinian Autonomous Territories and Jordan.