The people of Afghanistan will succeed!" the 91-year-old Zahir Shah told the assembly to applause. The parliamentary and provincial council elections were held on 18 Septem-ber 2005. Afterwards, the first results were declared on 9 October. Final results were delayed by accusations of fraud, and were announced on 12 November. Former war-lords and their followers gained the majority of seats in both the Lower House and provincial councils. Women won around 28% of the seats in the Lower House, six seats more than the 25% guaranteed in the Af-ghan Constitution which was launched in 2004. Approximately twelve million voters were eligible to vote for the 249 seats of the Wolesi Jirga, the Lower House of Parlia-ment, and the 34 provincial councils.

Many Afghans were killed or maimed during the almost three decades of war starting in 1978 between the Mujahideen and the former Soviet Union backed communist gov-ernment. During the month of October, the Lower House of the Afghan Parliament discussed the issue of how to help the remain-ing families of the martyrs and disabled. This issue is a controversial issue and after many days of discussions MPs in the Lower House could not agree on finding a definition for a martyr and find a solution to help their families. The other issue discussed in the Upper House was the issue of an invitation to the Ambassador of Israel by the Af-ghan Embassy in Berlin, Germany on the occasion of the Afghan Independence Day. Upper House Senators were not a about this invitation. As usual the issues of Afghan refugees in the neighbouring countries, security in the provinces, as well as the prob-lems of implementing the Kabul city's mas-ter plan, increasing prices of food commodities and the plight of Afghan prisoners in other countries appeared as usual in the agendas of both houses of the Afghan parliament through out 2007.

The Lower House discussed and approved articles 22 to 29 of the Academy of Sciences law on the 1st of November. A person from Parwan province appeared before the Internal Affairs Commission of the Lower House to complain about an officer of the Ministry of Internal Affairs that he accuses in the murder of his brother. The Head of the Criminal Investigation of the Kabul police said to the mentioned commission that an officer has been arrested in this case. Deputy Minister of Foreign Affairs, Head of the Afghan Red Crescent Society and Deputy Minister of Refugees Affairs attended the sessions of the Upper House and discussed the issue of Afghan refugees’ expulsion from Iran. Deputy Minister of Foreign Affairs said that the Iranian side agreed on the voluntary repatriation of Afghan refugees but the Iranian officials have also said that Afghan refugees will be sent home from the provinces of Sistan and Baluchis-tan and a number of other provinces. He added that negotiation with Iranian authorities continues to find a solution. Deputy Minister of Refugee said that they have provided camps for 100,000 refugees in the provinces of Herat and Nimroz.

On the 3rd of November the extraordinary session of the Upper House condemned the publishing of the holly book Quran in Dari language only. Senators considered the publishing of this book which is translated by an unknown person as an insult to the holly Quran and a conspiracy against Islam because the translation is not correct and it is without the original Arabic text. After discussion, Senators decided that the person behind this should be punished.

The Natural Environment Commission of the Lower House approved the Law for natural resources of Afghanistan on the 4th of November. On the 7th of November, six members of the Lower House Economic Commission were on a visit to the northern province of Baghlan, six members of the delegation died in a suicide bomb attack. The six MPs were: Seyed Mustafa Kazemi from Parwan, Sahiburahman from Kunar, Sebghatullah Zaki from Takhar, Abdul Mateen from Helmand, and Mohammad Arif Zarif from Kabul and Nazakmir from Kunduz. More than 70 people were killed in the blast and about 70 were injured. The government announced a three day official morning.

Two days after the tragic incident in Baghlan province, where six MPs and more than 60 students and civilian people were killed and many injured, the Lower House asked the government to relieve the Governor, Head of National Security Directorate, Director of Education of Baghlan province until an investigation is completed. MPs accused these officials of negligence. On the 10th of November, a number of Lower House MPs called on the government to put an end on working with a number of smaller parties and to stop appointing governors and chiefs of police from these parties. MPs consider governors and chiefs of police behind inse-curity in the country and they even asked for the prosecution of those government officials who have made the people not to cooperate with the central government and have distanced themselves from the government because of these officials. MPs suggested to the government to appoint professional officials in government jobs. One MP said to the media that MPs are ready to go to the President and ask him about his problems and tell him to distance himself from the parties' pressure and assure him that MPs are standing behind him.

On the 14th of November, it was reported in the media that according to MPs in the Lower House, women prisoners in Kabul Pol-e-Charkhi prison were being assaulted by prison officials. According to Lower House MP, Fauzia Kofi, who has spoken with some of the victims, in some cases intimi-dation and force was also used. Ms. Kofi adds that when prisoners get sick and ask for medicine, officials give them anaesthetic drugs and then they are raped and in some cases they were taken to the rooms of officials by force, and some prisoners have be-come pregnant. MPs say that fear of traditions and fear of prison officials have prompted victims not to come out and speak with the Parliamentary investigative delegation. MPs in the Lower House ap-proved the natural resources law on the 17th of November. This law is for the purpose of ensuring ownership and control of the government, protection, use, and encouraging private investment in the minerals of the country. On this day, MPs voted for the newly nominated Minister of Refugees, Shir Mohammad Etebari, Abdul Qadir Fetrat, the Head of Afghanistan Bank and Professor Abdul Aziz for the vacant post of the Supreme Court Judge. All three officials received the vote of confidence from the Majority MPs present in the Lower House.

On the 19th and 20th of November, MPs in the Lower House discussed the good neighbourly agreement between Afghani-stan and China, the UN convention on to-bacco and also as usual the issue of insecurity in the country. The Lower House delegation headed by MP Haji Farid sent to Baghlan five days ago returned but did not talk about their findings about the suicide bombings that killed six MPs, school stu-dents and civilians in Baghlan province. MP Farid said that they will talk to the members of the delegation sent to Baghlan earlier and after that they will present their report to the general session of the Lower House.

Speakers, Deputy Speakers and Heads of the Commissions of both houses held an extraordinary joint meeting and discussed the security challenges of the country on the 23rd of November. This is the first ever joint meeting of both houses of the Afghan Parliament which has discussed the security situation in the country and has asked for launching serious talks with opposition groups. Lower House Speaker, Mohammad Yonus Qanooni regarded armed activities of the opposition groups, kidnappings and armed robberies as major concerns in the country which needed to be discussed with the President, security officials and the leadership of NATO. Also Speaker of the Upper House, Professor Sebghatullah Mogaddedi considered the current security situation as inadequate for now and the fu-ture of Afghanistan, and even created problems for the neighbouring countries and the world. Head of the Counter Narcotics Com-mission, Mullah Taj Mohammad Mujahid said, serious talks should be held with all the opposition groups (Hizb-e-Islami, Taliban and those who are not linked with Al-Qaida) and their logics should be heard and if they don't have anything logical to say, we should fight them.

Two days after Lower House Speaker and MPs staged a walk out; the government announced that a delegation under the supervision of the Minister of Interior presented its report to the President on the incident in Baghlan province. The report blames government officials for negligence in that inci-dent which six MPs lost their lives.

On the 28th of November, Lower House Speaker, Mohammad Yonus Qanooni was back at work and thanked the President for giving a positive answer to the decision of the Lower House. On this day Lower House MPs asked the Ministers of National Eco-nomics, Finance, Trade, Industries and Ag-riculture to attend a session of the Economic Commission of the Lower House and answer questions about the continued rising prices of basic commodities. A number of MPs asked for the interpellation of the Minister of Commerce in regards to the continued increasing of basic commodity prices. MPs accused the Commerce Minister for lack of performance in this regard.

The Ministers of Defence, Interior and the Deputy Director of National Security who attended the joint meeting of both houses are believed to be working with the Parliament to come up with a scheme for the im-provement of security, which included bet-ter coordination between domestic and international security forces. Details of this scheme have not come out yet but Parliament officials say that the result of discus-sions will be presented to the President.

On the 1st of December, Lower House ap-proved the cooperative law, the good neighbourly agreement between Afghanistan and China and Afghanistan becoming a signatory to the UN Convention on the Pre-vention and Control of Tobacco. In the first week of December, Lower House MPs discussed and asked relevant Ministries of the government to come up with a scheme to reduce the ever increasing prices of basic commodities. The government says that it has no money to buy basic commodities and sell them to people through government run shops but MPs in the Lower House have been asking the government for some time to revive the government owned food enterprise and through competition with private sector the prices will come down. Media reported that an Afghan Parliamentary delegation after meeting with European Par-liamentarians, asked for joint institution to monitor the spending of foreign aid. Afghan MPs have said that despite large amount of foreign aid spent in Afghanistan, the impact has not been seen in the lives of ordinary Afghans.

Qanooni regarded the non attendance of MPs in the general sessions of the Lower House as a weakness and also referring the loss of six Lower House MPs in a terrorist attack in Baghlan province. Qanooni said that from 170 legislations presented to the Lower House, 162 belonged to the government and the rest were the work of MPs. During this year 40 legislations were approved by the Lower House, 30 areas were identified where the people had problems and 127 times government officials were called in for discussions in regards to the problems of the people. Qanooni also spoke about the continuous visits of Lower House delegations to the various provinces of Afghanistan. 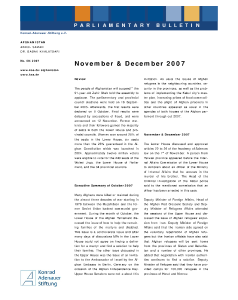