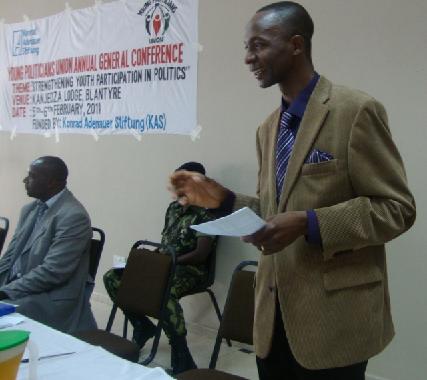 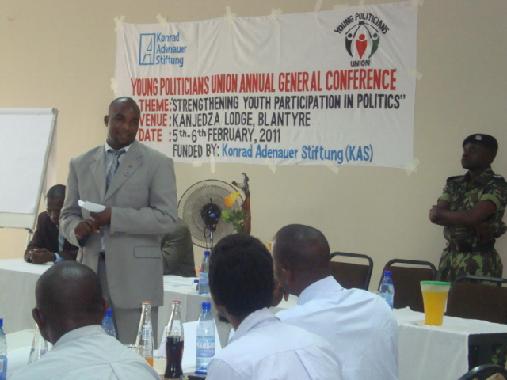 Participants of Young Politicians Union AGM
Themed "Strengthening Youth Participation in Politics", the conference programme also included four training sessions on Transformational Leadership, Gender-Based Violence, Party Financing and Ethics in Politics. While the first session was co-presented by Henry Kachaje and Samson Lembani, the Gender-Based Violence session was presented by Maggie Sundu- a YPU member from Mwanza district. The last two sessions were offered by David Katete and Patience Chilera. The two also attended the KAS Summer Academy in 2009 and 2010 respectively. Further, there was a spontaneous presentation by Yusuf William from Mangochi and Boston Mkandawire from Rumphi who shared experiences from their districts on collaboration and networking with the Gtz-funded Multi Party Liaison Committee in overcoming political violence.

In addition to reviewing annual activity and financial reports from all the active districts/chapters and the National Secretariat, the assembly which is the supreme organ of the YPU also received and adopted the 2010-2015 YPU Strategic Plan, the 2010 Evaluation Report and debated and passed several amendments to the YPU constitution. Also new in this conference were the Mk2,500; Mk1,500 and Mk1,000 merit awards given to Nkhata Bay, Nkhotakota and Zomba districts respectively, by the outgoing YPU National Secretary Moir Mkandawire. The awards were made to Nkhata Bay for being best performing district with 261 paid-up members, Nkhotakota for timely and consistent submission of monthly reports and Zomba for re-activating its membership to 100 in 2010 from nearly nothing in 2009.

This conference was also unique in that four representatives from the YPU Alumni were present and presided over the election of the new YPU National Secretariat that went on until 2am on 6th February 2011. The new Secretariat saw Clement Makuwa and David Katete sailing unopposed for the positions of National Director and Deputy National Director. Generally, the 2010 Annual General Conference was probably the best in 5 years in terms of quality of debates, degree of engagement by delegates and indeed the most democratic elections for the National Secretariat office bearers that will lead the YPU until 2013. KAS sponsored board, meals and one way transport to all the conference delegates and the one-day planning meeting of the outgoing National Secretariat held at the same venue.