của Canan Atilgan, Simon Engelkes
The Berlin Libya Conference is a success for German diplomacy. For five months the German government has been working behind the scenes on the so-called Berlin process for Libya, which Chancellor Merkel announced in September 2019. The conference in Berlin was preceded by several meetings of senior officials from the participating states and regional organizations. All foreign powers interfering in the Libyan conflict were brought together and committed themselves to respect the UN arms embargo and to stop bringing mercenaries and arms into the country.
Ngày 20 tháng 1 năm 2020 thông tin đặt hàng 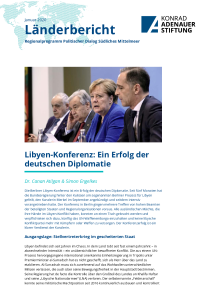