Tanzania Ahead of Elections

của Richard Shaba
Tanzania will later this year conduct its fourth multiparty general elections. But if the current socio-economic and political trends remain unchanged the country is unlikely to make any headway in the political transition for the foreseeable future. Although formal multiparty politics was allowed in 1992 after three decades of single party political hegemony, the major structural blockage to effective growth and flourish of multipartyism in Tanzania is the conflation of the ruling party, state and the consequential crowding out of other actors.
Ngày 10 tháng 5 năm 2010 thông tin đặt hàng 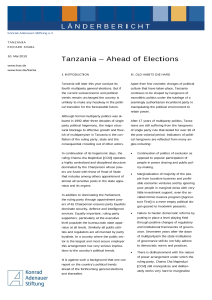