от Leontine von Felbert
A new Jordanian income tax law and its previous drafts sparked large protest starting in May 2018. As the new provisions within the law only directly affect around 10% of working Jordanians, they can hardly be understood to be the sole reason for the popular anger. Instead the law came in a context of steep price hikes, high poverty rates and a widespread feeling that government corruption prevents efficient use of taxpayer money. This country report looks at the new income tax law and its provisions; it highlights the challenges to the law and notes that it has brought to the open wider social discontent that is being expressed through an attitude of non-cooperation towards the government.
16 Септември 2019 информация за поръчка 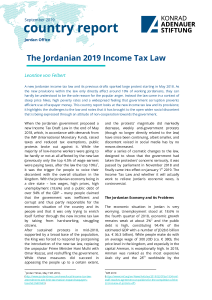