The 20th century is marked not only by the two most deadliest wars in the history of mankind, but also by the two most brilliant (and so desperately needed) ideas which were made a reality: the United Nations and the European Union. Needless to say, both of the ideas share similar roots and aspirations. The concept of international peace achieved through unity and mutual cooperation was not a groundbreaking one; however, the nations of the world had to face the scope of their own destructive and self-destructive force to finally start translating those ideas into action. The modern world order was forged not by mutual love and respect, but rather by the post-WWII paralyzing fear of what kind of inhuman actions the human kind became capable of.

However, there was still hope that goodwill intentions will prevail. That through years and decades, once the fear goes away, the implemented ideals will turn self-evident.

When the Council of Europe and the European Union were established, Beethoven's “Ode to Joy” became their official anthem. Marking the annual Europe Day, every formal event and every signed treaty, this Ode reinforces the notion of this majore patria, bigger motherland of the European citizens:

«our unity in diversity». Nietzsche in his “Birth of Tragedy” recalled the Ode in a similar light: «If one were to transform Beethoven's jubilant 'Ode to Joy' into a painting and place no constraints on one's imagination … then one could begin to approach the Dionysiac. Now the slave is a freeman, now all the rigid, hostile barriers, which necessity, caprice or 'impudent fashion' have established between human beings, break asunder. Now, hearing this gospel of the universal harmony, each person feels himself to be not simply united, reconciled or merged with his neighbor, but quite literally one with him». Thus, Schiller's poetry, Beethoven's music and the new European self-identification matched together, forming a perfect unison.

The European Union anthem, however, is not only about the joy of being united in diversity. The official lyrics goes: “Citizens, Europe shall flourish; a great task calls on you”. The prediction is accurate: European unity is not just an idealistic concept that happened to come true; European unity the result of never-ending hard work every European citizen if engaged in. From high-level officials, representing their people's hopes and will in Brussels, to every school-kid — the EU is shaped by intentions and actions of millions of people, who are willing to be respectful, tolerant and far-sighted. European citizens themselves are the beating heart of the idea that brought them together. This is an ambitious experiment, a miracle, if you want, that, day by day, proves itself true.

Nevertheless, the above-mentioned “great tasks” has always been there. There are dozens of issues on everyday EU agenda, and the process of enlargement is one of those. With the EU–Russian relations facing decline and the shades of the Cold War coming back into news feeds or morning newspapers, the topic of enlargement becomes a burning one. Even though there are no more antagonistic ideologies tearing the neighboring countries apart, the concept of the two opposing coalitions has outlived the Soviet Union itself, taking a new shape. While some countries are willing to become an integral part of the European Union, the others prefer not to follow the pattern of this “European dream” — and, in one way or another, side with the Russia instead. The question is: what drives the both sides?

There are currently seven countries on the waiting list to join the EU (Albania, Bosnia and Herzegovina, Croatia, Iceland, Kosovo, Macedonia, Montenegro and Serbia), even more countries are officially associated with the EU. For some states, including Georgia or Ukraine, the associate membership is believed to be a significant step forward to the full-scale European future. However, one of the greatest achievements within the EU system — its transparency — is currently not on the side of further EU enlargement. For instance, back in 2016 the referendum on the Ukraine-European Union treaty took place in the Netherlands; two-thirds of the voters overwhelmingly rejected the perspective of closer links between Ukraine and the Union. It took another year to finally ratify the treaty; but the lasting impression of the first reaction was evident: the European Union itself is not unambiguous about its enlargement. With the continuous multi-stage process of admission of new members, the “European dream” currently seems a dream only for some of those states, which are willing to add a new star on the EU flag.

So if the current prospects are rather vague, what is the actual reason for the states to side with the EU?

In this context the glory of the ride seems to prevail over the actual destination. The very intention to join the EU family, to adopt the European ideals and principles as their own is incomparable more enriching then the actual membership. The European Union is quite demanding system in terms of its prospective members: there are certain criteria to be met before even attempting to inquire membership, and for the majority of non-EU states these criteria turn into guidelines for comprehensive development. The way to the European Union is challenging, but ennobling. The “European dream” in its essence shapes a country's vector of development for years to come — to that extent that the actual EU membership may not remain crucial in the end.

Thus, intentionally or not, the striking example of EU self-help and prosperity pushes the neighboring countries to join the Union in its bold experiment of establishing and promoting the democratic order in the Eastern hemisphere. This bring up another question: then what is the momentum of those countries not willing to claim their European identity? Are Russia, Belarus and Armenia that strikingly different that they are not pursing the European agenda? The answer cannot be unequivocal; in my opinion, it is exclusively the matter of these countries' current ideologies. Taking into consideration the opposite examples through the past 5 years, the intention to join the European Unions comes as a natural one when a country is on the threshold of liberalization.

All in all, the actual EU membership is only a tangible form of what in he 21st century is believed to be democracy and open-mindedness. A country become European not when the relevant treaty is signed by the both party, anв not even when a nation-wide referendum is held; a country turns European when its people adopt the European ideals. The European Anthem never had a single line about the EU exclusiveness. The “Ode to Joy” is universal — and will always remain one. 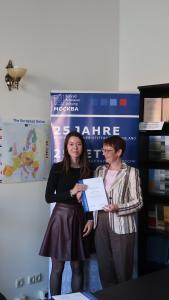