“What is the EU and what can it give us?” That is the question that all countries ask themselves before applying to enter the European Union. Some decide that the benefits of being a part of the European single market and economic and monetary union outweigh the downsides and choose to participate in the integration project. Others believe that cons take precedence over the pros and opt to stay out. The question to ask here is why. It should be noted that the question I have in mind is not “Why are some countries in the EU and others are not YET?”, which could simply be reduced to them needing some time to be able to meet Copenhagen criteria. No, the question here is why some countries choose to be a part of this integration project and others decide that they would function much better on their own both in the short and in the long run. There is no simple answer to that question but rather the one that consists of several factors.

To begin with, the EU is mostly famous for its economic integration. However, not all countries see it as an advantage. For instance, Norway has opted not once but twice to stay out of the union. That decision mostly comes down to the economic rules and regulations of the EU, which, the Norwegian side believes, would harm its economy more that they would boost it. That opinion is based on the fact that the economy of Norway is highly dependent on its fishing industry, which would suffer from restrictive quotas if the country ever becomes a member of the EU . Another example is the UK, which has recently chosen to leave the EU. One of the major factors which contributed to that decision is that British people were dissatisfied with the effect of migration form Eastern European countries on UK’s economy that started as a result of accession of these countries to the EU in 2004 and the single labour market that is currently in effect in the EU . Taking these cases into consideration, one can see that these countries obviously decided that their economies would be better off if the stay out of the EU. The Eastern European countries themselves, on the contrary, chose to enter the union in the early 2000s exactly because their economy would expand once they were full-fledged members of the European Union. Therefore, the reason that some countries are a part of the EU and some are not is the economic benefit VS economic drawbacks that they can get being a member state.

Another reason is a more theoretical one. Although the EU is considered to be the most successful integration project in the world and it has proved its competitiveness, the problems it faces cannot be left out of consideration. The recent years have been quite tough on the EU: it had to deal with the eurozone crisis, the migration crisis, the rise of populism and euroscepticism and many other issues. The countries that decided to stay in the EU or were still considering joining it during all these troubles are the countries which certainly believe in the survivability of the union. The ones that opted to leave or decided to simply stay on the other side are the states that consider the EU to be doomed to failure or just of less attractiveness compared to staying sovereign. All that being said, the belief in the survivability of the EU and its continuing success is the factor that determines the decision of countries regarding membership in the EU.

Apart from that, the European Union cannot be imagined without its values, and states that do no support them are not allowed to join the EU. The example of that can be seen in Turkey. Although the dissatisfaction with Turkish leadership is one of the major reasons why the EU does not see Turkey joining it any time soon, the differences in values that the EU and Turkey hold cannot be overlooked either. This country has always been considered to be more eastern than western and there is a reason for that. Turkey, to my point of view, does not share such European values as democracy, freedom, tolerance, equality in general as well as between women and men and many others. These values are in a certain way the foundation of the European Union, thus, any country willing to join must share them, which, sadly, cannot be said about Turkey. The difference in values might indeed be one of the reasons why German Chancellor Angela Merkel said that Turkey should not become a member of the EU.

Finally, the political sphere should be considered when determining why some countries are in the EU and some are not. The European Union is based on the principles of not only intergovernmentalism but also supranationality and pooling of sovereignty. That means that the member states of the union give up a part of their sovereignty and decision-making rights in favour of supranational institutions such as the European Parliament, for instance. Although the main functions of the state are still not in the competence of the EU but still lie with the states, some important economic and social decisions are made by the European institutions. That is not what every country in the world is prepared to do, no matter which benefits it might get in return. One of the explanations to that is that the authorities of the most states in the world hold realistic views on international relations rather than liberal ones. That means that their only goal is survivability and the main way to achieve it is strength. Therefore they believe that giving up a part of their sovereignty is simply giving up the strength they need to survive, i.e. destroying themselves all on their own. The great example of that situation is the USA. Although this country is a part of major international organisations, such as NATO and the UN, its integration project NAFTA is nowhere near as advances as the EU and I do not see it ever becoming as advanced because the USA would never give up that much power. The same can be said about Russia. What does that has to do with the EU? It shows that the countries that chose to become members of the European Union hold liberal views on international relations and believe that cooperation inside the union would help them achieve their goals and maintain stable economic growth and improve the overall quality of life of their people.

All in all, the decision whether to join the EU or not is the decision that countries make taking several factors into account. Politics, economy, values and overcoming problems are just a few things that are needed to be taken into consideration. There are, of course, many others: some are common for many states, others are specific to individual countries. However, the overall decision usually comes down to the following question: will a country do better or worse (economically, politically, socially) if it is in the EU? If the answer to that is “better”, than the country is in the EU, if it is “worse”, the country will not join. 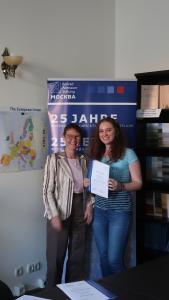