Looking back at the reasons for the emergence of the EU, no one can doubt that this Union resulted into the structure much more complex and interdependent than anyone had ever expected. At present the EU integrates 28 member-countries not only in economic terms but what is more important socially and politically. Such a form of integration makes the EU members deeply interconnected which influences their separate cultures as well.

There is even a non-official term in Russia ‘European mindset’ that represents openness and non-discriminatory attitude which are typical for the EU citizens. This way the core values permeate all the member-countries and unite them through tolerance and justice, the democratic values which are inseparable from the EU as such. In fact, the EU represents a supranationality. This concept allows to embrace both peacekeeping and promotion of the EU democratic values.

So far, the EU expansion was largely explained by the extension of its democratic institutes to ensure peace and equality among all Europeans and their nearest neighbors. Undoubtedly, the EU would face multiple issues without providing their closest neighbors with similar values: the insurmountable difference in human capital and economic situation would lead to uncontrolled and unwanted migration and the rise of crime. However, the policy of expansion and foremost expansion of the democratic values to other European and not only European states paves the way for maintenance of the peace and economic stability.

First of all, I believe that one of the core issues for the EU for next several decades will be the accomplishment and maintenance of the harmonious integration within the current territory. It is well known that over the beginning of the 21st century the EU has undergone quite a rapid enlargement. Not only was this expansion rather fast (especially the enlargement of 2004 that embraced 10 states), but it also included the countries which are in possession of the political, economic, social and cultural institutes that are pretty different from all of the previous member-countries’ ones. Overall there is no doubt that the rich diversity of the EU in various aspects is not a mere wanton trouble and it needs to be carefully addressed and managed in order to accomplish the internal stability and further growth. The other side of the coin is that the support of this diversity together with the EU integrity and unity in decision-making. So, there is a balance to be found between maintenance of the individuality of each state in cultural aspects and the upgrowth of the sustainability of the Union as a whole. Consequently, the expansion of the EU is likely to be purposely slowed down a bit with an eye to support strong social cohesion. Having said that, the EU is still likely to play an active role in promotion of the democratic values outside of its territory, thus preparing the countries willing to join the Union for the smoother integration when the time comes. That is to say, the EU in the long run is interested in the further harmonious integration for countries-candidates. Yet there is a lot of negotiations to be conducted and requirements to be fulfilled for the most current would-be members.

Secondly, another hot issue of the EU is to be faced with the current economic crisis. The analysts provide contradictory forecasts on the GDP growth of the EU and even though some claim that it is still going to be positive, the economic policy is to be flexible to withstand outside and inside shocks. To put it another way, the escalating uncertainty of the US economic policy, the China’s ever increasing market seizure and potential risks of losing the large demand market and cheap supplies of natural resources from Russia pose a real challenge for the EU economic policymakers. In order to overcome the difficulties Europe needs to develop new approaches and, consequently, promote the economic upturn. The main engines for the future development is, of course, the innovations not only in the production but also on all levels of the society. For instance, the elaboration of the efficient e-government not only will allow to save a lot of time and resources but will also help to support the democratic society. In addition, completion of the single market goes hand in hand with the political and social integration (which was described above). The EU market is still torn apart by conflicting interests of the member-countries that try to protect domestic markets and promote their goods and services. Thereby, the Economic and Financial Affairs Council needs to provide really strong incentives to support the single EU market.

When it comes to the relationship between the EU and Russia, one can definitely state, that it is a question of paramount importance for both sides. This complex relationship all through its history was acknowledged as an issue that hardly ever is to be absolutely settled. Many experts lay the blame on the conflicting interests of the “opposing sides”. Despite this I cannot help noticing that Russian society earns more and more of what we call “European mindset”, especially speaking of the youngsters. Thus, it shows a great path that has already been overcome as I totally agree with Jose Rizal who claimed that “the youth is the hope of our future”. As time goes by, tolerance and non-discrimination issues are much more frequently in the focus of the Russians. At the same time, the business sphere in Russia tends to resemble its Western colleagues. In other words, the Russians become more similar to their European neighbors with respect to views on core values and rights. Another key thing to remember is that Russia only recently drastically changed nearly all its institutions, rebuilding them from the USSR times which pursued a completely different policy. So, to my mind, that is absolutely normal that Russia requires some adjustment time in order to figure out its way in the constantly changing external environment. With Russians and Europeans growing alike, it is becoming more likely that the relationship between Russia and the EU will stabilize by 2050. It is widely recognized that the cooperation is wanted by both sides as it brings along the political and economic sustainability of the region. The sure thing to change, I believe, is the openness to the cultures and traditions of one another to better understand the true motives of people and ultimately the acceptance which we lack now. The problem arises from the lack of trust in the future of the EU from the side of its citizens which was increased because of the Brexit, so that shaping fully integrated society will surely contribute to stronger trust in the business society and increase the level of mutual investment flows.

All things considered, it seems reasonable to assume that by 2050 the EU will be made as an even deeper politically, economically and socially interconnected structure. Without question, the Union itself presents so much more than just simple cooperation of the member-countries and thereby the efficiency of all operations is only to increase as the time goes. The major strength of the EU lies in its integrity, whereas economy serves as an instrument to implement the key political and social values. To put it another way, the disintegration of the Union at the present stage seems so economically and politically painful that the governments cannot step back and not fight against the existing challenges. After all, ardent opponents predicted the collapse of the EU at every stage of its development yet it only got stronger and larger with time. As can be seen, the society that puts in the forefront the human dignity is always to prosper. 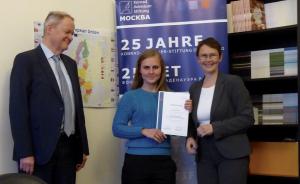