by Dr. Gerhard Wahlers
A federal minister from the Green Party travelling to the Gulf States to arrange the delivery of larger quantities of fossil fuels for consumption in Germany – for many, this is emblematic of how the parameters have shifted in spring 2022, including on energy policy. The Russian attack on Ukraine has changed many things – not least our view of how we use resources. Previously, this view was characterised by our attempts to reconcile economic efficiency and ecological sustainability, but now this has been supplemented by something that, objectively speaking, has always been important but largely absent from public debate in Germany: power.
June 13, 2022 2 Ordering Information

Countries that possess resources such as fossil fuels can sell them and use the proceeds to finance “classic” instruments of power such as tanks and missiles. But they can also use these resources to exert pressure on countries that have become overly dependent on them. They can exercise power by threatening to turn off the tap, which engenders fear and influences public mood.

Breaking away from such dependencies is vital from a security perspective – but it is no easy task. This is evident in Germany’s and Europe’s energy relations with Russia, especially when it comes to gas. The quest for alternative sources of supply often leads to North Africa and the Middle East. Although this region has large stocks of fossil fuels, logistical obstacles and political risks mean that it cannot and should not be viewed as a short-term replacement for the bulk of German and European imports from Russia. In this edition of International Reports, Simon Engelkes and Ludwig Schulz argue that it can only be one part of a new diversification strategy.

In turn, the effectiveness of sanctions, and particularly energy embargoes against Russia, also depends on whether Moscow succeeds in shifting sales of raw materials away from Europe to other continents. The Asian market is a key player in this respect. In his article, Christian Hübner describes how China, but also India, could view the situation as an opportunity to snap up the raw materials that Russia can no longer sell to the West at bargain prices.

In addition to importing fuel from other parts of the world, European countries can also reduce their dependence on Russia by ramping up their own production. According to Otilia Nutu, Romania could meet not only its own gas and electricity needs, but also supply its neighbours in Southeast Europe. However, this would require a radical overhaul of the political framework that has stifled investment in these sectors in the past.

The war in Ukraine has also changed priorities as regards agricultural resources. In recent years, sustainability has, quite rightly, been a focus of Europe’s agricultural policy. However, fighting in Ukraine and the ensuing shortages of commodities like grain make it necessary to reconsider certain policies, such as land set-asides. Food security should be a priority, writes André Algermißen. At the same time, he says, the current crisis should not be used as an excuse to indefinitely postpone efforts to make agriculture more sustainable.

Environmental challenges such as climate change do not stop just because our attention is, justifiably, focused on the war in Ukraine. It is extremely important to ensure that international climate diplomacy moves forward in the run-up to the 27th UN Climate Change Conference in Egypt. Anja Berretta explains how African countries have substantially increased their influence at world climate negotiations by skilfully coordinating their efforts. However, despite all the differences from one country to another, they often still have a poor record at home when it comes to environmental and climate protection.

Over the last few years, lack of action to mitigate climate change has increasingly been the subject of dispute brought before international human rights courts. But can judges actually save the planet? Franziska Rinke and Hartmut Rank address this question with a focus on Latin America and Europe. The results are mixed because judges can only send signals with their rulings, but cannot replace states’ lack of political will.

Concerning the issue of resources, European countries will have to adopt a three-pronged approach that incorporates environmental and economic considerations, but also thinks in terms of strategic issues and power politics. More specifically, this means that when making decisions on resources, politicians will not only have to consider sustainability and price but also ask the question: does this decision increase or decrease our susceptibility to political blackmail? Both politically and socially, this shift in mindset may prove to be a greater challenge for Germany than for some of its neighbours. Yet there is no way around it – unless we want to repeat the mistakes of the past. 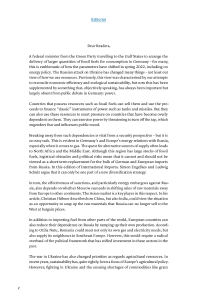