by Dr. Canan Atilgan
Traditionally, China has pursued a relatively restrained foreign policy in the Middle East and North Africa. This has changed dramatically in recent years. Within a few years the country has positioned itself as a new global power in the region. On the one hand, this is due to China's interest in securing access to energy and resources, expanding trade routes and opening up markets for its own export products. But there's more to it than that. President Xi Jinping's declared goal is to make China the world's number one power by 2049 - the centenary of the People's Republic.
January 23, 2020 Ordering Information 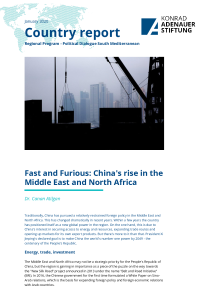 European and International Affairs China's role in the world