Fumio Kishida was confirmed in office as prime minister at the constituent session of the new parliament on 10 November. In her sixteen years in office, outgoing German Chancellor Angela Merkel has seen a total of ten Japanese prime ministers come and go. Fumio Kishida, the 101st prime minister, is unlikely to meet her in person again, yet the numbers speak volumes with regard to Japan’s rotating government. The concern that Japan will once again fall into a long period of changing prime ministers is justified, as the Abe era weighs heavily on the party and the government.
12 พฤศจิกายน 2021 ข้อมูลการสั่งซื้อ

Following the unsurprising resignation of Yoshihide Suga, who faced enormous challenges during his short term in office, Fumio Kishida (64) took over as party leader of the Liberal Democrats (LDP) on 29 September this year and as prime minister on 4 October. Kishida, who has represented his home constituency of Hiroshima 1st District in the national parliament since 1993 through family ties, is Japan’s longest-serving foreign minister (2012–2017). After two unsuccessful attempts to lead the LDP (2018, 2020), Kishida prevailed against three strong candidates on this occasion.

For the first time ever, two women ran for president of the ruling LDP. The fact that they were defeated is less due to their very different politics and more to the lack of support within their party, which points to an endemic problem: women are not yet trusted with leadership positions. The positive response to the prospect that Japan could have been ruled by a woman is putting some pressure on the conservative LDP. The target once issued under Shinzo Abe to appoint at least 30% more female executives by 2020 was cut for grossly falling short, with the deadline unceremoniously changed to “as early as possible during the 2020s.” As a result, Japan ranks 120th (out of 156) in the World Economic Forum’s Global Gender Gap Report 2021. The low percentage of women in the new parliament is indicative of this: they do not even make up 10% of the total seats (out of a total of 465). The Constitutional Democratic Party has the highest percentage of women, at 13.5%, while women make up only 7.6% of the LDP. This is reason enough for the LDP and the government to finally deliver on their promises.

And Kishida might deliver. He won the lower house elections on 31 October by a very wide margin over the unsorted opposition parties (48.4%, 261 of 465 seats), and after being reconfirmed as prime minister and swearing in his second cabinet in mid-November, can devote himself entirely to implementing the lavish election promises that were largely formulated by the conservative forces of the LDP around Abe. Substantial subsidies for small and medium-sized enterprises (SMEs; post-COVID growth promotion), massive investments in new technologies, subsidies for the digital and technological transformation of enterprises, promotion and expansion of renewable energies, tax reforms, and wealth distribution, as well as an increase in the defence budget to well over 2%, are the LDP’s most budget-intensive, yet at the same time, most important projects. Women’s advancement, or “womenomics,” is once again excluded from the pressing issues that Kishida and his new cabinet will address immediately. Economically, this negligence will take its revenge. Japan needs a stable female employment rate, and this can only be achieved with revised policies and processes for hiring and promotion.

The United Nations World Population Forecast (2019) predicts that Japan’s labour force (15 to 64 years of age) will face a deficit of 21 million to 54 million people between 2020 and 2050. The population of people aged 65 and older will nearly double from 18 million (as of 1995) to 34 million (2045). By 2025, one in three Japanese people will be 65 or older. The dependency ratio (proportion of non-employed persons per 100 employed persons) will rise from 69% to 97% during this period—the highest of all OECD countries. These figures could be even more dramatic if the unemployment rate remains as low as it is now[1].  Since Abe, Japan has been trying to address this decline in the labour force participation rate with the much-cited “Society 5.0” program, which, as described in his election manifesto, provides investment for developing technologies that can replace or relieve the burden on the labour force. Kishida will likewise have to address the issues of labour migration and immigration reform during his term.

More pressing, however, is providing further relief to the pandemic-stricken economy. The government’s extensive measures for SMEs during the pandemic helped keep business closures to a minimum. The range of work-specific support measures included partial layoffs, wage subsidies, and subsidies for the self-employed. It also allowed for deferred payment of income tax, rent, and utilities. Additionally, the government provided three types of financial support: loan guarantees, direct loans, and subsidy grants. The new structural guidelines covered teleworking and digitisation, innovation and training, and redeployment and transfers. In October 2021, the Japanese government launched various pension plans and quite a few aid regulations to maintain employment rates[2].  Special payments to temporary workers and a new edition of the “Go to Travel” subsidy program are part of this catalogue of measures, as is the launch of a new economic stimulus package to be put together in November. The expected size of the package? 55.7 trillion yen, or about 433.5 billion euros.

Much more fundamental is Kishida’s intention to establish a “new form of Japanese capitalism.” Beyond the corporate profits and high employment levels achieved with deregulation and debt-financed stimulus programs, Kishida wants to create sustainable growth. Consequently, he is promoting a holistic view of the economy. His goal is to allow as many people as possible, especially the middle class, to benefit from growth, and promises—among other things—significantly higher wages for employees. Neoliberal is now becoming social.

The third major task facing Kishida’s new government is the promise to make Japan climate-neutral by 2050. Drastic reductions in emissions were once Suga’s big pitch, which Kishida topped with more pledges at COP26, the United Nations climate conference held in Glasgow on 3 November. By 2030, resource-poor Japan, the fifth-largest emitter of fossil fuels, aims to increase its share of renewable energy in the electricity mix to between 36 and 38%. Coal-fired power generation is to be scaled down with a target set at 19%, while at the same time, the industrial use of CO2 and industrial-grade hydrogen are also important components of its lofty goal of climate neutrality. Kishida wants to see Japan at the forefront of the global green industry. If this is cleverly integrated with sustainable growth targets, it could actually succeed.

The upper house elections are to be held as early as July 2022; Kishida needs to show convincing results by then to become firmly established in his position. He must keep the factions within the LDP on his side, especially the influential group surrounding Shinzo Abe. Apart from his strongly socially-oriented economic program, Kishida’s agenda to date has been largely shaped by his predecessors. At the same time, the COVID-19 pandemic, now in its third year, continues to dominate almost all day-to-day political activities. That being said, infection rates have dropped dramatically, and vaccination rates are high. The LDP has been able to benefit greatly from this. Kishida’s poll numbers during his first days in office, however, showed that he has not.

On 11 November, Kishida presented his new cabinet during a special session of the Diet following the lower house elections, which again includes only three female ministers (out of 21 posts). One of his competitors for party leadership is among them: Seiko Noda has been appointed as Minister of State for Gender Equality. With her, the LDP would have helped an experienced and respected champion of women’s advancement and gender policy to the highest political position in the country. Among those remaining in office is Minister of Defense Nobuo Kishi, Shinzo Abe’s younger brother. Like his predecessor Taro Kono, he is an LDP hardliner toward China. Regarding the situation in Taiwan, the Ministry of Defense’s White Paper states: “Stabilizing the situation surrounding Taiwan is important not only for Japan’s security but also for the stability of the international community. Therefore, we must pay close attention to the situation with a sense of crisis more than ever before.” The choice of the new Minister for Foreign Affairs is, therefore, all the more astonishing. The previous incumbent, Toshimitsu Motegi, took over as LDP Secretary-General to become the party’s number two; the appointment of his successor Yoshimasa Hayashi as a top diplomat is hotly debated in China-critical circles. Hayashi, like his father before him, chaired the China-Japan Parliamentarians’ Friendship League (he announced his resignation from this position on 11 November) and is known for his rather soft and yielding stance.

In terms of foreign policy, the parameters are already set for Kishida: relations with the U.S. should remain as close and trusting as possible. Defense Minister Kishi strongly reiterated this in a press conference on 12 November. Japan must position itself in the face of growing military aggression in the East China Sea. As a consequence, the regional security alliance Quad was enhanced a few months ago, with regular meetings being held at the highest level between the US, Japan, Australia, and India. Helpful here are recent initiatives of the EU, Germany, and France, regions which have declared security and prosperity in the Indo-Pacific region to be a priority as foreign and defence policy.

Nevertheless, Kishida is measured primarily by his domestic political successes. If he wants to remain in office over the long term, he must be visible in society and embody a political and economic awakening. That will be difficult, given Shinzo Abe’s rapidly growing influence within the party. The latter recently took over the strongest faction within the LDP as the successor to Hiroyuki Hosoda, who was elected as Speaker of the House of Representatives. The 90-member group has so far produced four prime ministers. It is not without reason that rumours persist in Tokyo’s political backrooms that the long-serving prime minister could soon run again himself. 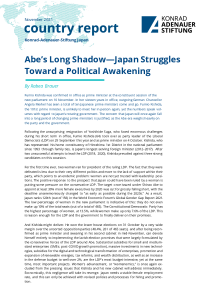 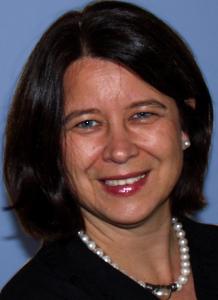