Transatlantic Discussion:Conservatives in the U.S. and Europe – A Natural Alliance?

On December 13th, 2012, the Konrad Adenauer Stifting in Washington, D.C. organized an event with the Young Transatlantic Conservative Alliiance (YTCA) to discuss the involvement of future young conservative leaders in the transatlantic relationship
20 ธันวาคม 2012 ข้อมูลการสั่งซื้อ

At the event, the two keynote speakers were Ambassador L. Paul Bremer, a renowned U.S. diplomat and chief executive authority for Iraq under the Coalition Provisional Authority in 2003 and former Congressman Jim Kolbe. Among the 50 guests were many young American leaders in the foreign and security policy with a particular interest in transatlantic ties.

The YTCA, as partner in the discussion, is designed to facilitate an exchange of ideas by providing forums for dialogue and debate. The organization is intended to bring together dedicated, young professionals in Europe and the United States. In Helbig’s remarks, he spoke about the YTCA’s role in helping repair the damaged relationships between European and American conservatives. He discussed his ideas for the YTCA going forward, including building a network of future conservative leaders across the Atlantic as well as educational and scholarly initiatives.

Former Congressman Kolbe spoke about the many shared values the US and the EU have, such as the Constitution and the Magna Carta. According to him, many other countries can only aspire to such values. But he also pointed out that we must not take “freedom” for granted and encouraged more transatlantic cooperation in protecting our common values.

The theme “Freedom” was further detailed by Paul Bremer, who was the former U.S. Administrator of the Coalition Provisional Authority of Iraq and former Ambassador to the Netherlands. “Freedom”, how we currently enjoy it in Europe and the US is being threatened by several fronts. Here Bremer mentioned China, radical Islam, predatory states, etc. In response to these external threats, Bremer calls for strengthened cooperation among nations that share similar values. Bremer welcomes the establishment of YTCA, which can function as multiplier among like-minded people.

Both Kolbe and Bremer spoke about how their experiences working with European conservatives. They stressed that the transatlantic relationship, which has played a vital role in their careers, needs to be revived through public diplomacy efforts, such as the YTCA, and policy initiatives, such as the transatlantic free trade agreement. The Konrad Adenauer Stiftung was able to bring a together a group of politically engaged young conservatives to engage in an active dialogue on the future of transatlantic relations. The discussion contributed to the future of a transatlantic alliance among young leaders and young professionals. 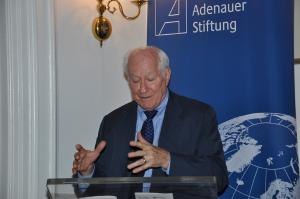 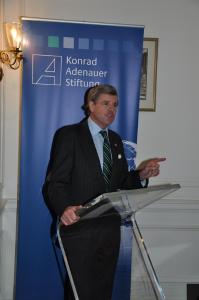