It is particularly important to note that this delegation reflected India’s unique diversity, wherein it consisted of former ministers, members of parliament, diplomats, bi-partisan political actors, and think-tank experts, with significant variation in age and gender.

While engaging with a kaleidoscope of actors from across all levels of governance, certain themes emerged as critical to further India-EU cooperation on effective global governance and multilateral cooperation:

While it is crucial to strengthen India-EU engagement to shape the future of multilateralism, it is important to note that the EU is not a monolith, and bilateral engagement remains seminal in creating synergies. Perhaps, no other partner is suited to promote Indo-European engagement than Germany.

Germany remains India’s single most trading partner from within the EU accounting for $21.9 Billion dollars in bilateral trade in FY2017-2018 as well as being within the top 10 largest sources of FDI for India. This puts the nation in the best position to shape European engagement with India on multilateral economic governance as well as the BTIA. Furthermore, synergies between both countries exist and must be continued to be capitalized on.

Regular engagement between both countries is routinely observed through initiatives such as Indo-German Inter-Governmental Consultation which concluded its fifth edition this week. Chancellor Merkel echoed aforementioned European positions on the need for a “fresh attempt” at the trade deal, as well as promoting flexibility through simplifying certain processes, such as the recruitment of Indian skilled workers. 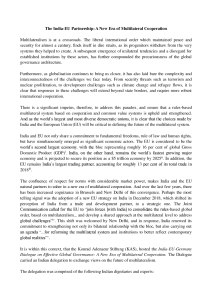