Despite the commonality of the Covid-19 pandemic, countries have adopted a wide range of public health and socioeconomic strategies to deal with the multidimensional challenges of the pandemic. Many adopted whole-of-government (WoG) and whole-of-society (WoS) approaches. According to the WHO, operationalizing a WoG approach is challenging and despite limited evidence on best practices, 3 factors seem to be critical for the success of a WoG approach – leadership, partnerships and use of evidence (https://bit.ly/3tXy0Pq).A WoS approach– with communities and subnational governments at the centre – also appears to be dependent on similar factors for its success. What are the noteworthy public health and socioeconomic strategies adopted by countries to tackle the Covid-19 pandemic? How have countries operationalized WoG and WoS approaches vis-à-vis the Covid-19 pandemic? How has evidence been leveraged, and how have responses to Covid-19 evolved with evolving evidence? What are the major public health and socioeconomic implications of such strategies and approaches? What are the lessons for / from developing countries like India? In order to find answers to these questions, the Indian Council for Research on International Economic Relations (ICRIER) together with India Office of the Konrad-Adenauer-Stiftung (KAS) organized a diginar titled, “Covid-19 Global Best Practices: Lessons for / from India” on 2nd July 2021.
5 de julio de 2021 Obtener información sobre pedidos

- Adopt compulsory licensing (CL) in the case of Covishield vaccine. CL is not required for Covaxin as it was developed with public money (R&D) and scientific knowledge from ICMR. PSUs should also manufacture it. The financing and procurement of vaccines should be the responsibility of the central government and distribution that of the states / UTs;

- Scale up health care spending to a minimum of 2.5% to 3% of GDP (tax funds complimented by wage contributions from employer employees); o Integrate a fragmented health financing and insurance system for scale economies, cost minimization and larger coverage;

- Increase production of specialists and focus on distribution – larger focus should be on nurses – changing incentive structure necessary to bring back clinical specialists;

- Implement the Clinical Establishment Act and Rules to regulate private sector (for quality and price);

- Improve quality of government health services to improve confidence in people and access; 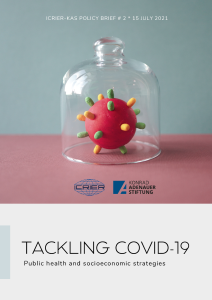