How to best reconcile climate protection and economic interests and how should we assess the climate performance of a country from this point fo view? In order be able to answer these questions, we propose to take into account the CO2 productivity as a key influencing variable. Our comparison of the G7 countries shows why this approach is sensible.
7 décembre 2020 Informations de commande

The economic revival of the G7 countries after the Corona crisis should go hand in hand with an effective climate policy. In other words: When assessing the climate performance of the G7 countries, economic development must play a central role. CO2 productivity, which considers greenhouse gas emissions in relation to the value of goods and services produced, is a key factor here. In contrast, Western industrialised countries are still characterised by a one-sided focus on absolute CO2 emissions. This falsely suggests that a radical decoupling of greenhouse gas emissions from economic development has already been achieved. However, all G7 countries have been able to significantly improve their CO2 productivity since 1990. Thus, we recommend the following:

1. Establish the CO2 Productivity as a Central Assessing Benchmark 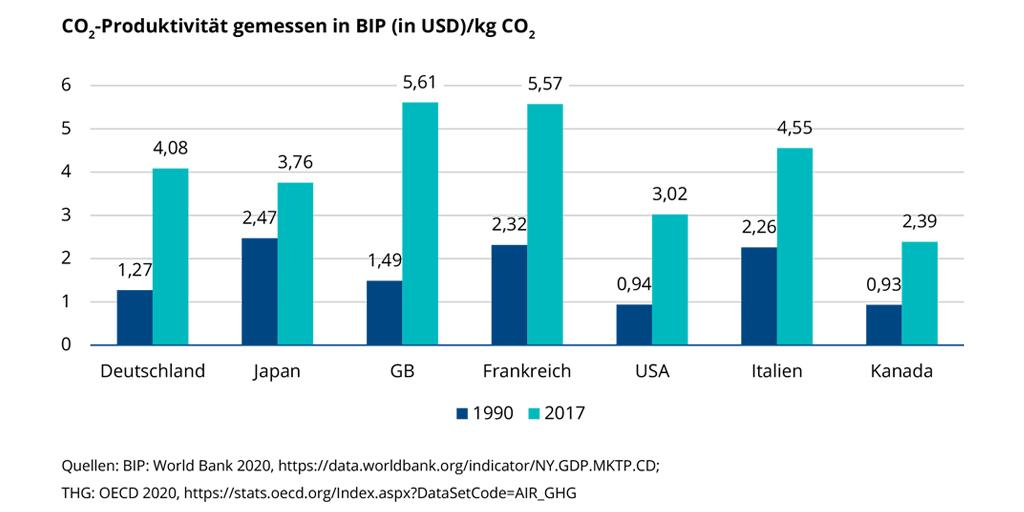 In addition, the defossilisation of industrial production will exponentially increase the demand for CO2-neutral electricity, especially through the growing use of green hydrogen. The consistent expansion of renewable energies with, if necessary, the import of preferably green hydrogen, is thus essential for good climate performance. With its climate performance to date, Germany can serve as a role model for both Western industrialised countries and emerging markets. This is especially the case when German CO2 productivity is observed together with the high share of industrial production and renewable energies in the G7 comparison.

Accordingly, the political priority for Germany must be:

to further expand renewable energies in a way that land is used efficiently, and social support is maintained.

A clear CO2 price signal that is as neutral as possible in terms of technology provides longer-term investment incentives for effective climate protection. Here, the European Emissions Trading Scheme (EU ETS) has proven to be a key instrument of climate policy; with the share of coal-based electricity having declined substantially over recent years. Provided that the price of certificates in the EU ETS reaches a pivotal level in the long term through sufficiently ambitious climate targets, the climate performance of the European G7 states (despite Brexit Great Britain is still interested in participating in the EU ETS), will greatly improve over the coming years. It is expected that this effect will be particularly strong for Germany with its currently still large share of coal-fired electricity compared to the G7. Conclusively, the EU ETS should be extended to as many economic sectors as possible considering the clear advantages (quantity-based target accuracy, cost efficiency and openness to technology). 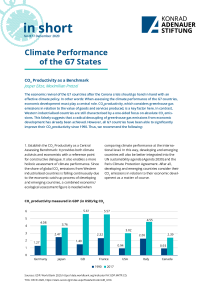