The Israeli-Palestinian Peace Negotiations – What’s Next?

ของ Dr. Otmar Oehring, Simone Hüser
As the Middle East Peace talks are heading towards 30th April 2014 and hence, towards a supposed end, hopes of brokering a deal are almost non existent. KAS asked two Jordanians experts on their opinion regarding the negotiations and expected developments.
22 เมษายน 2014 ข้อมูลการสั่งซื้อ

General (ret.) Mansour Abu Rashid is the Founder and Director of the Amman Center for Peace and Development. He was appointed Head of Jordanian Military Intelligence in 1988 and was directly involved in the peace negotiations with Israel in 1991.

The eyes of the followers of the peace negotiations are looking towards the 30th April 2014, which was set by US Secretary of State John Kerry as a deadline for the negotiators to finalize a timetable framework for an agreement to end the Israeli-Palestinian conflict. The expectations of a successful and promising outcome have been lowered significantly. Expectations that have been drawn by Mr. Kerry on the commitment of both sides will not be realized either fully or partially as the attitudes expressed by both parties are tough and difficult to alter. During Abbas’s and Netanyahu’s last visit to Washington, President Obama stressed that both sides need the courage to compromise their radical attitudes.

The question asked is if there is anything left to do for President Abbas after it was suggested to him lately to omit the right to have Jerusalem as the capital of a future Palestinian state and to offer a fractioned and disarmed state? Would it be possible for President Netanyahu to give up the Jewishness of the state and the settlements at Jordan Valley? And is it possible for the politically congested environment in both Israeli and Palestinian societies to help supporting any incomplete solution from both parties?

The release of the rest of the prisoners before the end of March 2014, as previously agreed upon, is currently seen as a test for the Israeli leadership as a release would led the glimmer of hope of all followers of the negotiating process grow again.

What, however, happens if the negotiations fail and no agreement is reached?

As the US has to find a way to save its credibility and reputation in front of the international community, I believe that it will try with all means to come up with a framework for an agreement and a timetable and to provide clear guidelines for a long term solution in a more realistic way. It will further try to increase the pressure on Israel to calm the anger of the Palestinian side; demand a return of tax money which was collected from the Palestinian Authority; release more prisoners; grant permits for the reunification of Palestinian families; and increase the activity of local community organizations by allowing Palestinians to enter the Al-Aqsa mosque for worship.

The question rises whether the Palestinian Authority would be satisfied with the American offers or if it would resort to an option involving the United Nations calling for the completion of the operational procedures for the recognition of a Palestinian state with full sovereignty over its territory in order to rescue itself politically. The probability of failure of negotiations could push the Palestinian Street to take a decision to start a third intifada which would force the Palestinian Authority to embrace this option under the deterioration of the situation and the political attitudes.

However, all these already mentioned scenarios are linked to what will happen at the end of April 2014.

Prof. Dr. Amer Al Sabaileh is a university professor and political analyst. He is a lead-ing columnist in various newspapers and media outlets.

The Middle Eastern settlement is pending since the first draft of the Arab peace initiative in 1981; the US-Administration is facing many obstacles regarding this issue. On the regional level, Syria and its allies were the major obstacles, coupled with the Israeli stubborn stance on final status issues, mainly borders, security and Jerusalem.

The detachment of the Syrian regime con-stituted a golden chance to the American Administration to revive the negotiation process away form any influence, taking into account that the major Arab countries Egypt, Syria and Iraq are now too involved in their domestic issues.

Starting with Kerry's plan, the Americans insisted that their major concern of a solution to the conflict is the national security of Israel (see Kerry’s visit to Amman, Arab delegation), but still believed that a general agreement could be signed. Therefore, the Americans see the Palestinian President Mahmoud Abbas as the leader who will be able to sign the agreement before leaving office. Although Abbas is not a legitimate president anymore as his mandate expired, there is no call for presidential elections.

Recently, reluctance and hesitance have engulfed the American stance on the settlement caused by:

1) The stubbornness of Netanyahu which pushed the Americans to think of prolonging the negotiations. A great deal of information confirms that the US-Administration is bid-ding on a potential successor of Netanyahu; surprisingly the American candidate is former minister Liberman (in notice of his recent comments towards Kerry’s plan). Re-sults of recent polls in Israel revealed a major dissatisfaction with Netanyahu's Cabinet's handling of different sectors, except the security sector. This would push Netanyahu to focus more on the promotion of security issues, dwelling on the so called Iranian weapon vessel "Kols" to enlarge the danger coming from Syria back to the propaganda of a war with Iran.

2) John Kerry might be the candidate of the Democrats for the coming presidential election in the US, especially amidst news reports confirming a deterioration of Hillary Clinton's health condition.

3) Since President Barack Obama's inauguration, Abbas has been offered many privileges by the Americans. Actually, Obama's Administration believed that he is the only one who could sign at least a general framework agreement on the peace process. However, by the time, Abbas showed weakness in achieving that goal. Actually, Abbas's weakness and his personal disputes with Fatah leaders, mainly with Muhammad Dahlan, have led to the emergence of strong lines inside the Palestinian Authority. The Americans will realize that keeping Abbas would be useless as his legitimate presence as the president of Palestinian Authority is subject to doubt (Abbas’s mandate expired).

4) The Americans might seek an "exit strategy" from the Palestinian issue, thinking that it would be better to tackle it again under better conditions which could be as followed:

- The balance of power inside the coalition if Netanyahu changes in a way that pushes the government to have a more flexible position towards the American vision.

- Hezbollah is weakened to the point that it can not represent an obstacle ahead of the regional settlement.

Yet, in coming November, the US-Administration will start being more involved in its domestic issue, especially with 2014 embracing the parliamentary election in the US and, starting from 2015, the US presidential campaigns. This means that the Palestinian-Israeli issue might be back to the category of "pending issues." 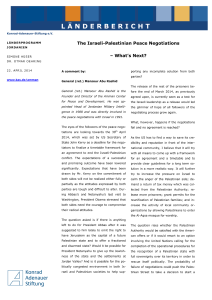